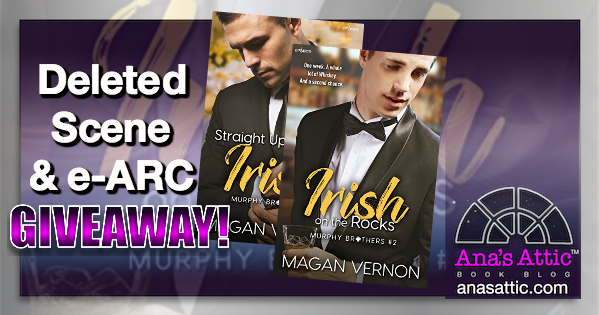 Deleted Scene from STRAIGHT UP IRISH by Magan Vernon

“Come on, Pinky, you can’t refuse dessert. And it’s already here. Indulge a little bit. For me?” I asked, setting the fork in front of her, watching her eyes widen.

She sighed, putting her pen down with extra oomph and picked up the fork. “If I take a bite will that make you happy?”

“Very,” I grinned, thinking I’d won at least one battle.

She took one small bite. Her neck bobbed as the tiniest moan escaped her mouth.My dick jumped to attention, making food the farthest thing from my mind.

“I’ll admit, this is delicious.. Do you want to try a bite?” She held out her fork holding a piece of the cake, dripping with caramel.

Fuck talking about contracts and rules. I owed Fallon to do what I promised and write it all down, but now that I knew the moans she made when I was buried deep inside her, I couldn’t concentrate on anything else.

The nagging thoughts of not getting close and focusing on the company went to the back of my mind. All I could focus on was her tongue flicking across her lips.

I took a few steps closer before getting down on my knees. She eyed me carefully, sucking in a breath as I spread her legs. Her panties were already damp beneath my fingertips as I slid them down her legs, letting them fall to the floor.

“That wasn’t what I meant by taking a bite,” she stammered.

Using my thumb, I swiped some caramel from her fork. Keeping my eyes locked on hers, I slid my slick finger across her damp opening. She shuddered against my touch, her mouth parted and let out a shaky breath.

“I think I know something sweeter than cake,” I murmured, dipping my head and flattening my tongue along her center before tasting her saltiness and mixing it with the sweetness of the caramel.

She gripped the arm of the chair, her legs trembling.

“This isn’t what I had in mind with talking rules,” she gasped.

I smiled against her flesh, hooking a finger inside of her while swirling my tongue in the same direction I moved my digit. She moaned, leaning back in the chair with one hand on my head, threading her fingers through my hair and tugging it lightly.

Feck, her little tugs, and moans sent me over the edge. Growling, I sucked on her hardened bud. Her legs shook around me as her hands clawed my hair and my neck like she couldn’t grasp onto anything.

I take one hand and hold onto hers, intertwining our fingers. She gripped tightly to my hand as I slide in a second finger and moved my tongue in the same rhythm as my swirling digit. Her soft moans turned into a whimper as she clenched around my fingers, coming hard as she called my name.

I let her ride out her orgasm, her hips rocking to my face. Slowly I moved my hand and fingers against her sensitive flesh causing another little eruption. She bucked her hips to my face until her rhythm slowed and she sunk back in the chair. Her breathing heavy and legs still shook with aftershocks from her climax.

Slowly, I moved my head back and placed my chin on her leg. Her eyes were at half-mast and she didn’t say anything. Just took slow, shallow breaths.

In that moment I thought I could get used to having her like this. But as quickly as the thought flitted through my brain, I kicked it to the back of my mind. There was an end to all of this. We were just taking care of each other. That’s all this was.

Even as I thought that my head and chest twisted. So instead of thinking about the business or Fallon’s orgasms, I stood up.

I smirked and grabbed the fork off her now discarded plate. Then I took a bite of the chocolate cake.

“Did anyone tell you that you’re the master at avoiding things? But that you also have an amazing tongue?” she asked, letting out a deep breath.

Plenty of girls had said that about my tongue and about me avoiding real issues. Keeping the company was the first thing I ever fought this hard for. But my mind was still reeling about where Fallon and I fit into all of this. She was right, and I couldn’t avoid talking about this forever, especially now that rule number one was going to be broken multiple times.

I took another bite of her cake, chewing slowly to try and think of what to say that wasn’t what was twisting in my chest. “I told you, I had to eat something before we talk about business.”

I grabbed two more plates of food from one of the many carts, setting one in front of each chair, before taking my seat across from her.

To Enter for one of two e-ARCS of IRISH ON THE ROCKS (releasing September 17), just share the graphic (below) on any socials and tag me or come back to the original post you shared and tell me where. 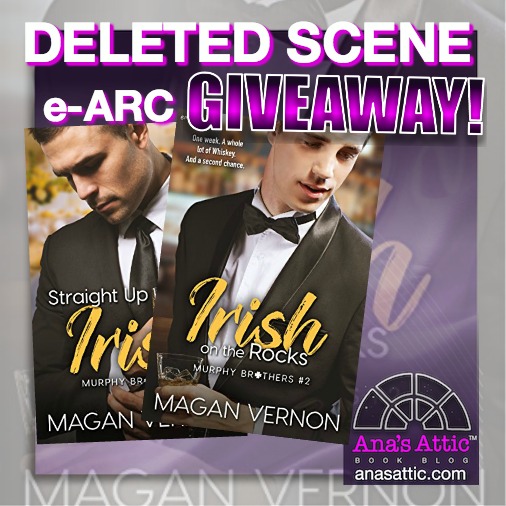