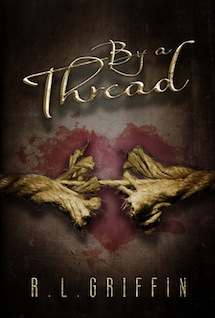 By a Thread by R.L. Griffin is a book, from the description, that there is no way I would have read, despite it’s awesome cover. If you guys have been following my reviews, you know I like feel-good books. Emotions are fine if I get my HEA. But my sister asked me to do a friend a favor and read her book, and I did, with some trepidation from reading the blurb. Well guess what? I was completely and utterly sucked in from page one.

What a pleasant surprise! Despite its mostly dark subject matter, this was a book filled with hope and lots of funny little lines. By a Thread was very well written and filled with loss, longing, friendship, love, healing and a holy shit! moment that I never saw coming.

Stella has just moved to Washington DC with her fiancé Jamie and their awesome dog, Cooper. Jamie is starting his new job as an ATF agent, and she is about to start law school. Stella knows nobody in DC and they are moving into Jamie’s friend’s basement apartment. That same first day in DC, Jamie is killed in a car accident.

Patrick, Jamie’s friend and Stella’s new roommate is completely there for her. What a great guy. He takes care of her when all she really wants to do is crawl in a hole. Stella defers law school for a year while she spends that time as a drunk zombie with only Patrick and their other roommate, Billy, to remind her to get up each day and take care of her dog.

“She was held together by a thread. Not even strong fishing wire, but the kind of thread that could fray and break in the wind. A thread that could unravel at any moment, scattering and smashing all the pieces of her that she was trying desperately to keep together.”

Stella might be miserable, but she is one feisty girl with a really great sense of humor, especially drunk (which she always is). The three of them spend a lot of time at a local bar, Finnegan’s, where Stella strikes up a friendship with the bartender, George. But she doesn’t heal. In fact, she gets an accurate (yet gross) depiction of her shattered heart tattooed across her back  to keep people away.

“She was hard, numb. The hardness had come about recently, spreading through her brain and chest. She worried that if she were hit hard enough she would just crack”

When Stella begins law school a year late, she meets Millie, a fun, feisty law student, that starts a friendship with Stella immediately. Stella doesn’t share much. She doesn’t talk about Jamie–to anyone. And she is still wearing her engagement ring. But Millie is welcomed into the group immediately, and she thinks Patrick is H-O-T!

“I mean, seriously hot. Did you see he has that arrow muscle?
“What” Stella was confused.
“You know, the muscles that point to his dick, the arrow to his dick. Good God,” she groaned. “I almost jumped him last night.”

(I LOVE the arrow muscle!)

Over the years, Stella and George’s attraction grows, in fact he has been crazy about her, but her heart is still shattered. All she wants is sex.

“If I weren’t working I would take you home immediately,” he growled.
“What’s wrong with here,” she teased and pulled his earlobe with her teeth.
“Oh, no. This is going to be slow and deliberate.”

George is pretty fucking awesome…and he rides a motorcycle. But Stella is just too broken to see it.

“I want to tell you that you are beautiful, you know that? Inside and out.” He kissed her left shoulder blade, “but you are broken. I plan on fixing you.”

“Oh really, how do you plan on doing that?” she asked without moving.
He leaned down and kissed her lovingly on the back of her neck, up slowly behind her ear. A shutter went through her entire body. “Very slowly, and one piece at a time, love.”

By a Thread is one of those books where I’m having a really hard time explaining just why I loved it. If I think of the story, I’m not sure it rates quite as high. But my enjoyment of the book, and the fact that I didn’t check facebook while I read tells you something right there. I guess I felt like I was friends with the characters. Something about the way it is written draws you right in and doesn’t let go.

By a Thread was a fast read with great, relatable characters, funny lines, emotional subjects and crazy twists and turns. But mostly it’s about healing from great loss. This was a really wonderful surprise, and I look forward to reading the next in this series, which is currently planned as a trilogy.

Purchase or Borrow (Prime) By a Thread by RL Griffin

*This book was sent to me by the author for an honest review.

PS: This is the fourth book in 2 weeks that features a dead fiancé! How weird is that?

R.L. Griffin has graciously offered a signed paperback of By a Thread to a lucky winner!