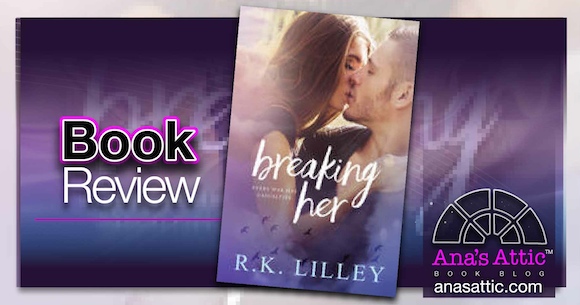 HOLY. HELL. What kind of roller coaster did I just get off of!? Oh I know what kind. The RK Lilley kind. Damn, that woman knows how to tell a story! I spent the first book in this duet, Breaking Him, wondering what could have torn this amazing couple apart. I had a feeling, I had inklings, but I had no real idea. It was more than I ever dreamed.

Breaking Her starts out right after Breaking Him ends (there may be slight spoilers if you haven’t read Breaking Him). Dante has broken Scarlett’s heart again, and she is drowning her sorrows in a bottle. Because, Tequila. She’s been there before, it’s almost becoming old hat for her.

“Once you’ve been broken, every break after, even when they hurt like hell, can never outdo the profound damage of the first time.”

Breaking Her was kind of like two books in one. We have Dante and Scarlett in the past and in the present. I did find myself wanting to go back to the past more, because I just had to know. WHAT HAPPENED? What could have torn this devoted couple apart? RK’s foreshadowing and hints of what to come just about killed me. Just when I think I could put the book down and let my family know I’m alive, she throws another zinger my way.

It is so hard to review this book, because, spoilers. I don’t want to ruin one moment of the unfolding, but let me tell you, it takes the entire book, but RK Lilley gives us all the answers. All of them. No holes are left. But I can tell you, something has changed. Despite Dante doing it again, Scarlett can’t seem to muster up the immense hate she had before they reconnected. So when Dante comes around again:

“I’m here for the same reason I always come back to you. I’ve come for scraps. Anything you’ll give me. I’ve come because I can’t stay away…I tried to.”

Scarlett finds her hatred has lost a little steam.

“I did not know how far all of his betrayals ran, how deep or shallow his lies, but I was starting to realize that in one respect, at least, it didn’t matter.
Some part of my pathetic heart was going soft for him again.”

My heart softened for him as well. In fact it became mush. Because, Dante.

“You’re heartless,” he told me, sounding like he couldn’t quite believe it.
Like he thought I would deny it.
I did not. “Of course I am. Did you think I wouldn’t be? You were my heart. And you left.”

Oh the angst! The mystery! The hate! The love! The super-hot sex! This duet has it all in spades. I loved Scarlett (even more after I listened to the audiobook for a reread of Breaking Him), but I was still angry at Dante. I mean he was amazing as a boy, but I hated him right along with Scarlett for breaking her. But I ended up loving him. LOVING. 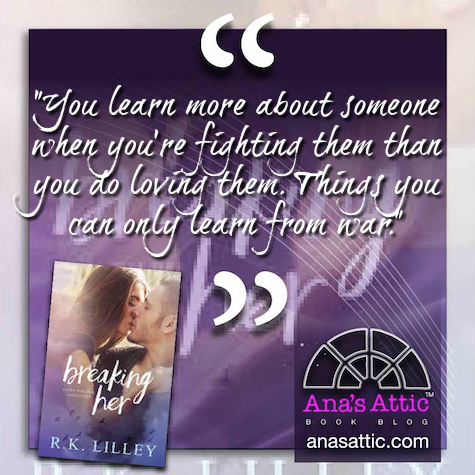 I thought it would be hard to end the Love is War duet as strongly as it began in Breaking Him. I mean, it would be really hard to top that! But RK Lilley completely blew me away. She had me guessing right up until the end.  Scarlett and Dante were one of the most meant-to-be-together couples I have read, and I wanted to root for them despite the fact that they continued to hurt each other. RK Lilley’s writing has improved tremendously and you can really feel her skill in Breaking Her. Her use of foreshadowing made the book unputdownable and it is amazing how she made all these twists in her head and didn’t miss one hole in closure.

The Love is War duet may be RK Lilley’s best work to date. It combines the best parts of all of her other books in a new, fresh tale. Because, Dante.

“My heart hadn’t belonged to me since I was ten and a beautiful blonde-haired boy had shown me that I wasn’t alone in the world.”

Purchase Breaking Her by RK Lilley

See my review for the audiobook and regular book of Breaking Him. 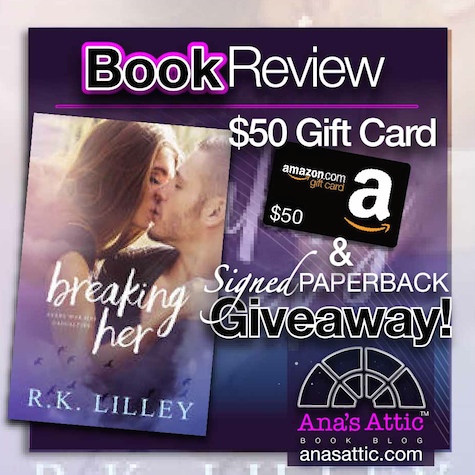