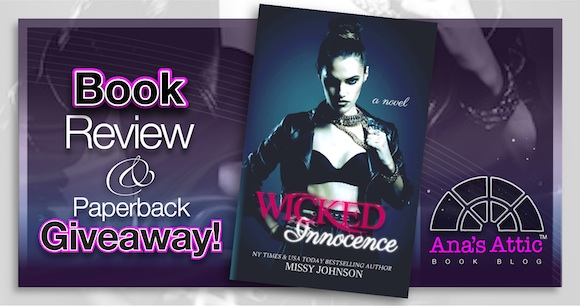 I read Wicked Innocence by Missy Johnson because I found the blurb intriguing.

Don’t let my petite and innocent appearance fool you, because I’m one person you don’t want to cross. I’m Micah, the youngest member of Resurrection…If only they knew how young.

My fake ID says I’m twenty-one. And I will be…in four years.

What can I say? I blossomed early. Home sucked, so I left, determined to do something with my life.
Landing the gig as lead vocalist in the band was a dream come true. I’ve worked hard to make something of myself and nothing is going to ruin that for me.

Then He showed up. Saxon Waite, ex bad boy of rock.

He’s hot as hell and so into me.

But he’s also twenty-five.
I don’t want to lie to him, but if the truth comes out I’ll lose everything. Including him

When I met Mr. Ana, I was 19, trying to sneak into a club he was working at with fake ID. He was 27. So I saw the 8 year age difference in Wicked Innocence and totally swiped it up. I’m glad I did, it was a good read. But in the blurb, the title, and the cover, Micah seems pretty tough, hence the “Wicked”. But honestly, I just never saw it.

Micah has been on her own since she was 14, and to survive on the streets, she needed an ID that said she was 18 so she could get a job and shelter. All she wanted to do was sing, so when the opportunity comes to try out as lead singer for an up and coming indie band, Micah goes for it. And fails, badly. Luckily, she makes up for it, and is signed on for a trial run.

But she didn’t know the manager was THE Saxon Waite. Gorgeous, famous, and out of the limelight for years, Saxon was immediately drawn to Micah. But there are 2 major hurdles. A) He is her manager and B) She is WAY too young at 4 years younger than him. Little does he know, she is 8 years younger!

There was no big jump into the relationship right away. There was a chance for a friendship and bond to form, but you couldn’t help but see their attraction grow, as much as they both tried to fight it. And once it did. Wow. 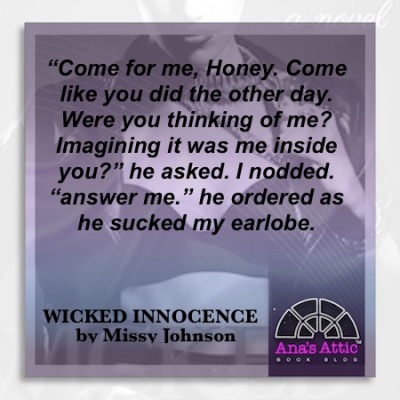 Micah had been on her own for almost 4 years. She is more mature than most people 10 years older than her. As they got closer, she knew she had to come clean.

“Here was this amazing man, with one of the sweetest souls I’d ever stumbled across and I was going to hurt him. I had a chance to be honest, and couldn’t do it. I couldn’t because I didn’t want to lose him.

I was a selfish, heartless person who didn’t deserve this man.”

I really enjoyed the story of a rock band, just starting out and on the road. I love a taboo romance. I really enjoyed the characters and the banter. But oh! the missed potential of this book! This was a good book that could have been great if there were just more.

For example, we never really find out what happened in the time she has been on her own. How hard was it at first? What did she do? As you are reading, you kind of assume she is a virgin, but then…BAM. Obviously not. This girl was plenty experienced (but still not wicked). Three years alone from ages 14-17 can really shape a person, but we got none of that. We know why she left and thats pretty much it.

Saxon also. We know that he partied hard when he was in a band. So hard that he paralyzed his cousin. Saxon is clean now, but I would have liked to see a bit more of his ‘bad boy’ side.

Also, the culmination of the whole story was just too easy for me. There was such potential for more angst and emotion! And hello???? Why didn’t anyone ever mention her birthday? When would she be 18? How could Saxon not ask?

Sax and Micah have both had pretty tough lives. I just wish I could have read about that more.

“Pain is life. You can’t avoid it. It’s how you find the strength to go on that shapes you as a person. Without pain you can’t live.”

I enjoyed Missy’s writing and the characters. I love a Rock Star book and I love the age difference. What was there, I really enjoyed. It was what was missing that bothered me the most. If we explored the couple’s backgrounds more, I think we would have had a much better book. I would have liked a longer ending as well, showing more ramifications of her lies about her age. I would definitely read more from this author, because what she did write was a pleasure to read. 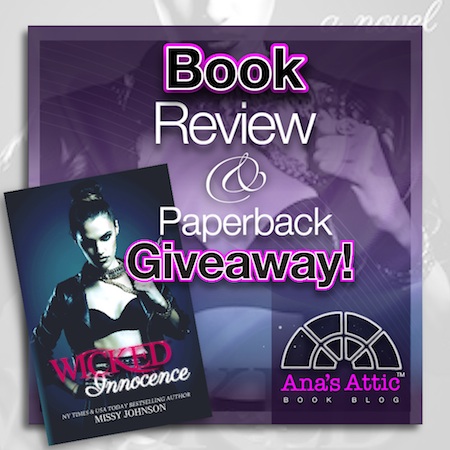