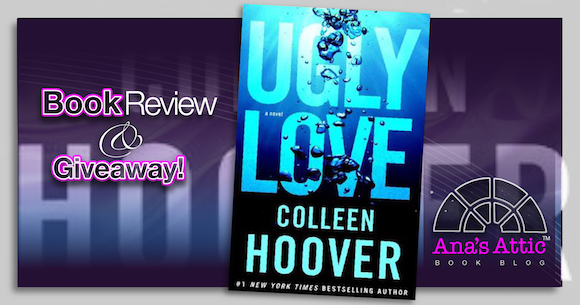 Wow. I have such mixed feelings about this book. I am a CoHo nut, and I have absolutely LOVED every book she has written. And I can genuinely say I loved Ugly Love. In fact, as I finished it, I thought it was probably a 5 star read. Then I started to remember my thoughts before the last 25% when it got really good, and became very torn on my rating.

I started this book while I was on vacation. I actually had one scheduled to read before this, but picked it up several times and couldn’t get into it, so I moved on to Ugly Love. I picked it up at 1:00am and was immediately hooked. I have to say though, I thought there may have been an issue with my copy, because all of Miles’ (the male lead) POV has the text centered, which I found kind of annoying and difficult to read (this is the way it is intended).

As I was reading, I was wondering where the ‘epic’ was that I am used to from CoHo. Colleen ventured into a more adult arena with Ugly Love, and I felt that there was a bit more sex than story at the beginning. The sex was well written and passionate, but I just didn’t feel like anything was so special about the story itself. Until the last 20-25% where I bawled my eyes out non-stop.

Tate has decided to move in with her pilot brother. As she arrives her first night, she is greeted by a strange man passed out drunk at the front door. When she finds out he is her brother’s close friend and a neighbor, she puts him up for the night, and comforts him as he cries his eyes out and calls her by the name “Rachel”. The next morning, the intensity between the two of them starts to grow.

Ugly Love is told in alternating chapters from Miles’ POV, 6 years earlier, and Tate’s (female) POV presently. Miles’ flashbacks, instead of being in italics like most authors, were centered and and more like poetry. We know of Colleen’s love of Slam poetry from the amazing SLAMMED. But here, despite how beautifully written it was, I had trouble making it work for Miles. The writing didn’t fit his personality. If the third wall was broken down a bit and we knew that his parts were being written (in the story) for publication, it would have worked better. It just wasn’t real to me. People don’t think and talk like that.

Rachel, Rachel, Rachel.
She’s like poetry.
Like prose and love letters and lyrics,
cascading down
the
center
of
a
page.

Don’t get me wrong. I loved Miles. I loved how sweet and in love he was with Rachel. I loved Colleen’s poetic writing. But even if he said he was writing in his journal or something that made him write like that, it would have helped me reconcile the poetic writing with the character writing it.

Miles has not been with a woman for 6 years. Since Rachel. The pilot’s best friends even thought he was gay. But when he meets his friend’s sister, Tate, things changed for him.

“He tightens his grip on my neck… and then he kills me. Or he kisses me. I can’t tell which, since I’m pretty sure they would feel the same. His lips against mine feel like everything. Like living and dying and being reborn, all at the same time.”

He felt attraction to someone for the first time in 6 years and he couldn’t deny it. But he knows he can never love again, so he sets up the ground rules immediately.

“Don’t ask about my past,” he says firmly.  “And never expect a future.”

Tate is willing to go along with it for a while. At least on the outside. But on the inside…

There are actually two stories going on throughout the book. One, 6 years ago, the story of Miles and Rachel.

“I hope she remembers the moment
she
became
my
everything.”

And the story of Miles and Tate.

“If I were capable of loving someone… it would be you.”

As we get Tate and Miles get closer, you can just feel how torn up and confused Miles is.

“Tate,” He says in a pained whisper. His face moves to my neck, and one of his hands grips my waist… His other hand moves to the back of my head as his lips rest against the skin of my neck. “What do I do?” He whispers. “What the fuck do I do?”

In fact, you feel so much throughout this book, it’s amazing. I don’t think I have bawled this hard over a book in at least 6 months. Though we have an idea of what is coming, Colleen’s writing just pulls out every single emotion from you so the point that you are a wrung-out, hysterical mess. But it’s Colleen. She’ll make it better.

“Love isn’t always pretty, Tate. Sometimes you spend all your time hoping it’ll eventually be something different. Something better. Then, before you know it, you’re back to square one, and you lost your heart along the way.”

Not Sure How I Feel:

Colleen Hoover has written another beautiful, amazing, heart-wrenching, emotional romance. She proves again and again why she is one of my favorite authors. Ugly Love just took a while to show me the epicness that is CoHo. Her unique poetic delivery of Miles’ POV was beautifully written, but that kind of delivery wasn’t story driven, and I had trouble with that type of prose from airline pilot Miles. While reading the book, there was so much sex (yes–I really said that), and the storyline wasn’t very unique at all, so was wondering where Colleen was. But as I read I was sucked in, then became an emotional blubbering fool on an airplane, then came home and BAWLED my eyes out, I realized she was there all along and thought it was amazing. 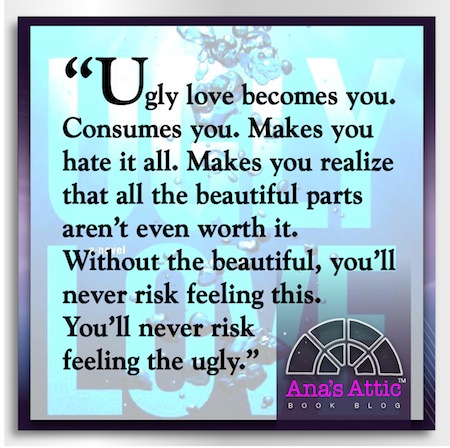 Win a paperback of Ugly Love or your choice of any Colleen Hoover e-book.