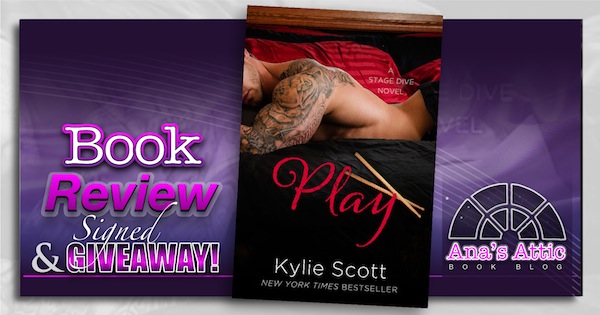 I have had Play by Kylie Scott on my Kindle for a while.  Until Joanne (she helps out here at Ana’s Attic) said I HAD to read it, and how happy it made her. She always knows what books are for me. I don’t love dark books, but a happy, sexy read? Bam, that’s for me. So if Joanne says it, I have to read it. So there went my carefully planned TBR list (what else is new?)

THANK YOU JOANNE! One of my favorite books this year!!!!

I read Lick, the first book in the Stage Dive Series while I was on following my son on tour last summer. I like to read rock star books when he tours, but when I finally got around to reviewing it when we got home, I didn’t really remember much of it, so I honestly did not recall Mal from Lick, but it didn’t matter one bit.

A sexy book that makes me smile the whole time and laugh is the perfect book to me, and Play is just that.

A big key to me loving a book is bonding with and loving the heroine. In this case, I fell for Anne the minute the book started, and started highlighting some of her quotes before the adorably funny Mal even entered the picture.

“I’m the drummer from Stage Dive. I don’t get kept awake by other people having wild sex. I keep them awake. I keep entire fucking neighborhoods awake.” ~Mal

Anne was shy, a little nerdy, and definitely a bit of a pushover. Her roommate just took off leaving her with a month of back rent, when she agrees to go with a neighbor (who is friend’s with Ev from book 1) to a Stage Dive party. Anne was a HUGE fan of the drummer as a teen.

“The pinnacle moment of my life was officially upon me. So I might have had one or two photos of Stage Dive on my wall when I was a teenager. Fine, maybe there were three. Or twelve. Whatever.”

So when Mal overheard Anne on a phone call at the party and starts up a conversation with her, her inner voice was cracking me up:

“God I hated people who smirked. Apparently I also wanted to lick them all over because my mouth started watering.”

Malcolm struck up the most random, and kind of awkward conversation with Anne, despite her giving him “crazy eyes”.  And halfway into the conversation…

“Whatever you’re imagining, it’s bigger.”
“I’m not imagining anything.”
“I’m serious, it’s basically a monster. I cannot control it.”
“Malcolm…”
“You’re pretty much going to need a whip and a chair to tame it, Anne.”
“Stop it.”

I swear, I sat there giggling like a schoolgirl right along with Anne! Mal was just this playful, fun manchild who was so endearing, that I was head over heels for him in moments. Banter for the win! I LOVE banter in a book, and Mal could have been renamed Mr. Banter (instead, his name is actually ‘Lord of the Sex!’)

By the end of the party, Malcolm was loudly and dramatically claiming his love and devotion for Anne, but it all seemed like a big drunk joke. Until she comes home the next day to find Mal moved in to her apartment.

“You’re moving in with me?”
“Yes, pumpkin. I am moving in with you.”
“When did we talk about this exactly?”
“Actually, you might have left by then. But it doesn’t change the facts.”

The apartment building has VERY thin walls, which means neighbors hear everything. And Mal couldn’t have neighbors getting more action than him.

“We’ve broken my bed,” I said, stating the obvious.
“In battle, sacrifices must be made, pumpkin.”….
“They’re mocking us,” I said.
“Nonsense. We just fucked so hard we broke your bed. They wish they were us. The natural order of sexual status has been restored.”

I just loved Malcolm’s silliness so much! There wasn’t a huge deep storyline at the beginning, but you know there is something simmering. Malcolm, who is always the life of the party, had way more going on. There was sadness behind the antics, and it took a while to learn about it. But I had no problem with the wait!

“Hello, Anne’s clitoris, it is me, Malcom, your lord and master”
“Oh, god, no.” I covered my face with my hands. “Please don’t.”
“Shh. This is a private conversation.”
He brushed hot feverish kisses up and down the lips of my sex. My stomach tensed so hard it hurt.
“Look at you all pretty, pink and excited. Don’t worry, I’ll look after you.”
“If you don’t stop talking to my vagina I’m going to kill you.”
“You’re beautiful Anne’s pussy. Just beautiful. And I’m not mean like her. I’m on your side and I love you very much.”

There was some serious moments and some sad moments, but all in all, I must say that Mal’s silliness stole the show for me.

He grabbed the back of my head, dragging the length of his warm, damp tongue up the side of my face. I froze against the onslaught. “You did not just do that.”
“It’s a sign of affection. You think I salivate on just anyone?”
“You… I can’t even.”
“There are women who would kill to have me licking their face. You do not begin to appreciate just how lucky you are to have my spit. Now lick me back.” He pointed to jaw demandingly. “Anne, do it. Do it now before I get offended.”

Play by Kylie Scott is a book I would love to read again (if I ever get time for a re-read again in my life!). It is just perfect for my tastes, it had everything I love – characters I adore, laugh-out-loud scenes, hot sexy times, tons of banter, and just an all-around fun and sexy read.

I’m so excited that Lead comes out at the end of July. Perfect timing, I’ll be a tour groupie again!

P.S. My Birthday is tomorrow: