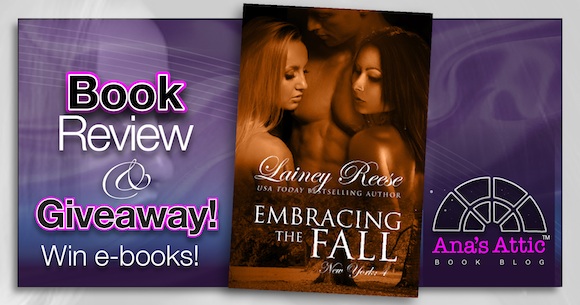 Embracing the Fall by Lainey Reese

I read a book by Lainey Reese a few years back that was so freaking hot, I still remember it (which, if you know me, that’s quite a feat!). I always meant to get back to the New York Series, but never quite got there, but A Table for Three (New York #1) was a really hot book with ménage and a Dom. Yum. So when I heard she just released a new one and consulted with a real Dom on it, I decided to read it once I heard it stood alone. I haven’t read any f-m-f books before, and I was a little nervous. But let me tell you right off the bat…there is NO f/f action at all.

Cami and Ziporah are as close as best friends can be. As roommates in college, Cami went through a terrible ordeal, and Ziporah was there to help put her back together. They are complete opposites, both in looks and personality. Cami is light, curvy, kind of shy and timid, and owns a great tavern. Zip is dark, small, and a prosecuting attorney. She has balls (not really!).

5 years after a boy made Cami lose all trust in men, she still hasn’t healed, and can’t move on. Through therapy, she has realized she is a sexual submissive, but she is not ready to put that theory into practice at all. Until some good friends decide to set her up with the perfect Dom. Still, Cami is not quite ready.

“This is the biggest roller coaster in creation and I feel like I have to ride it all alone with no safety harness…if only you were a sub too. Then I wouldn’t have to do this alone. We could do it together.”

“Zip, darlin’, there isn’t a submissive bone in your body,” Cami told her, still laughing at the idea. Especially with men. You chew them up and spit them out like sunflower seeds.”

But they agree for Zip to be a sub for the one night it takes to break Cami in.

Master Evan knew he was meeting Cami, but he couldn’t get the small, tough, dark haired attorney he met earlier out of his mind. So when he walked into the tavern to meet Cami, and sees her dancing with the girl from earlier, he was frozen. 2 gorgeous women, and he wanted them both. Badly.

I love how Evan was able to read Cami right away and see the fear in her eyes. I love how his dominant personality forced her to be calm. And I love how he tested the waters with Z too, to see if she could be submissive as well.  Evan wasn’t aware of the deal the girls made, so he was fretting all night about wanting both women.

“He found himself impossibly drawn to both women. EQUALLY. Looking at them and trying to choose felt as though he would have to pick between either his right eye or his left. Impossible.”

Behind all of her bravado, the Doms think that Ziporah is a sub as well, so Evan agrees to introduce both of them to the life. 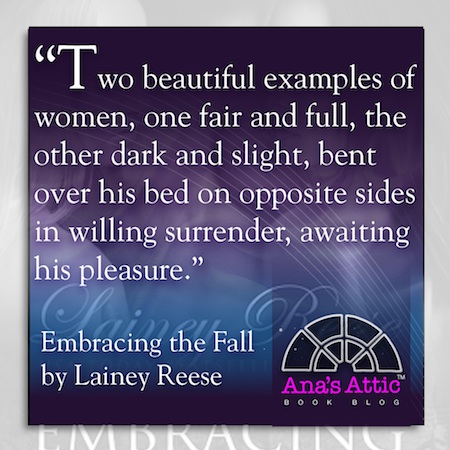 Lainey is great at writing the perfect Doms. Though I didn’t read books 2 & 3 in the series, I did get to meet the Doms from them in Embracing the Fall, and Sweet Baby Jesus, I’d like to read more! These men pay attention to all the signs a woman produces. Evan was so attuned to both women, I’m not sure men like that really exist, but alas, that’s why we read books. If you are looking for a totally hot read with an amazing Dom that can satisfy 2 women, grab Embracing the Fall, or start this series from the beginning. Just make sure you visit my Red Room first. You may want to stock up. Categories are on the left side. 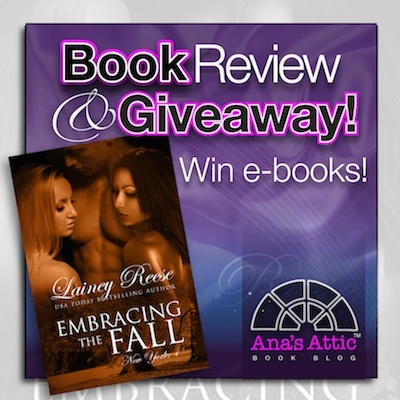