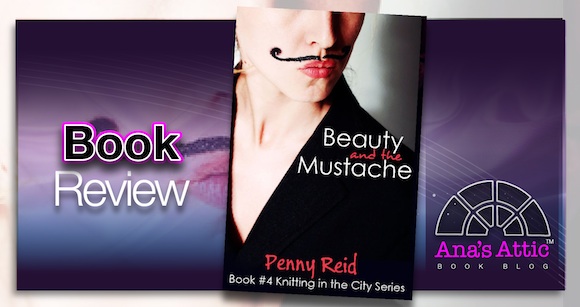 I have been wanting to read more of Penny’s books since Neanderthal meets Human, but my reading schedule just didn’t allow it. But when Beauty and the Mustache came out, and Penny said it could stand alone, I did something I rarely do, I skipped 2 books in the series and read this. It made me want to read the other two so much more. And I think this BaTM would have been a lot better had I read the other two. Other than Janie, I didn’t remember all the girls from knitting night, and I think that if I had Ashley’s story before she came to Tennessee I would have appreciated the story even more.

No doubt about it, Penny is a a phenomenal writer, and her writing is different from most authors I read, less dirty and way smarter. But Penny makes it seem effortless. Beauty and the Mustache was not what I was expecting. I was looking for more of the smart, quirky nerd humor from Neanderthal, but I got a much more serious, kind of sad, but super romantic tale, while still getting a good dose of the Penny funny quirkiness.

Ashley has come home from her nursing job in Chicago to small town Tennessee to care for her ailing mom. She hasn’t been home in 8 years, and her 6 hot, bearded hillbilly brothers who used to torture her are still living home with mom. She hasn’t kept up with any of them, but she talks to her mom every day. After arriving in the middle of the night, she is awakened at dawn the next morning to her brothers making a huge racket in the garage. Before even looking around, she storms into the garage, reaches into the car, and grabs the nipple of the person revving the engine loudly…assuming it’s her brother Cletus. But it wasn’t Cletus that grabbed her arm to stop her.

“Gray-blue eyes, almost silver, held mine in a vice grip of anger and surprise. I felt an electric bolt, like I’d been tazered in the stomach. Other than a very slight shadow of wonder, he wore an expression that would have made a thunderstorm proud.

As well, he was so ruggedly sexy I’m sure my mouth fell open to protest the unfairness of his existence. Luckily, no sound emerged. I was too busy oscillating between stunned, mortified, and turned on. This man was definitely not one of my brothers.”

It sure wasn’t. It was Drew Runous, her brother’s boss, and game warden for the area. Drew, the quiet genius who was suddenly a huge part of her family, but they had never heard of each other. He was always around–her brother’s and her mother’s best friend. He took care of her family, and she had never even heard of him.

Drew didn’t quite fit with her brothers, he was a poet, and quoted Nietzsche at every opportunity. In fact, each chapter began with a great quote. He looks at Ashley like he hates her, but you know it’s just the opposite. But Ashley isn’t there for romance. Her mother is dying, and Ash needs to spend every minute of her last few weeks with her. Also, Ash only attracts assholes, so she assumes Drew is one.

“Of course I’ve noticed ! How could I not? He’s like a Viking cowboy.”
“Does he give you zings in your things?” Sandra asked this question using her best serious face.
I groaned. “Yes, if that means what I think it means, which means he’s bad news. I have the uncanny ability to attract only users and assholes…”

Ashley is a romance novel lover, and I loved the way she described her love of reading and why. And I could totally relate to her love for the escape.

While there were some amazing and beautiful moments, the book felt a little long for me and dragged at times, despite the many funny lines. It’s hard to be that funny when a wonderful woman is dying throughout the whole book.

Drew was an amazing man. Strong and stoic, romantic and poetic, tough and resourceful. The poetry woven into the story was wonderful, and Drew was totally swoon-worthy.

“Since I first laid eyes on you and felt sorry for every beautiful thing that was made no longer resplendent— nullified by your being.”

Wow. Seriously, this guy is just perfect. Well, not really. In fact, all of the characters are perfectly flawed, and honestly I loved them all. 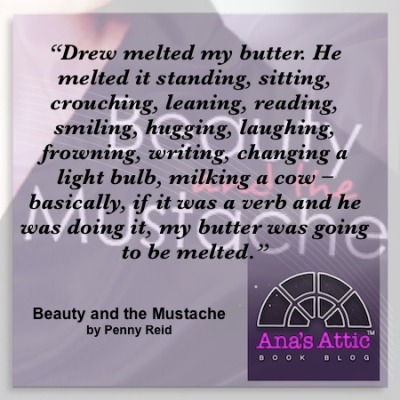 Beauty and the Mustache is a superb example of amazing, smart, romantic writing. There was good sex, but not a ridiculous amount. There were laughs and sorrow, but at the heart, there was a slow-building, pretty epic romance. I love the 6 brothers, and I would really enjoy a spin-off series about them. I must say though, I think that this book would have been a 5 star read for me if I had read the rest of the series. I think I would have been more patient with a book when I have that much time invested in the series already. Overall I recommend this book, but even more so, I recommend the series, especially if you like smart, quirky comedy and romance. 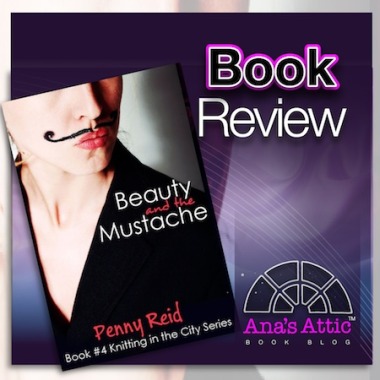