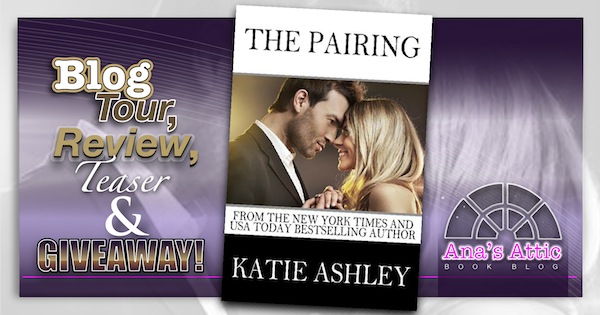 The Pairing, A Companion Novel to The Proposition and The Proposal by Katie Ashley

Adult Contemporary. Can stand alone, but way better if you read the rest.

I loved The Proposition Series by Katie Ashley. It’s one of those feel-good series that keep you grinning and smiling the whole time.  Alpesh “Pesh” Nadeen was in The Proposal, but I was never crazy about him, especially because he kind of came between my favorite couple a little bit. Then when he had a guest appearance in Beat of The Heart, I warmed up to him a bit. In The Pairing, I fell in love with the gentleman Doctor.

The Pairing is just one of those books that had you feeling like this the whole way through.

Honestly, I usually like my guys more alpha, rougher…but Pesh was still very manly, and yes, hot. In fact, there is nothing hotter than a guy who is good with your kid. He was an honorable gentleman. But he was strong, sexy, funnier than expected, dirtier than expected, and totally romantic. Pesh lost his wife and misses having a woman to love and care for in his life.

Megan is Aiden’s niece. She is a single mom to 15 month old Mason, whose dad is out of the picture. Megan always wanted to be a doctor, but after a bit too much college partying, she is back in school for her nursing degree. Emma and Aiden (From The Proposition/Proposal) need godparents for their baby, Noah. Who do they pick? Yup…Pesh, who got Aiden to the hospital on time, and Megan. Immediately, the family gives the two single godparents little pushes to get together. But they haven’t met yet.

“Don’t look now, but there’s Dr. Dreamy McBollywood now”…
Megan licked her lips. “Oh my,” she finally managed.
“Sure you don’t want to give him a chance?”
Fighting the urge to fan herself, Megan quickly replied, “I’d like to give him many chances.” Chances at ripping off my clothes, chances at kissing and licking me all over my body, chances at allowing his hands, fingers and the promising bulge in his pants to stroke me until I orgasm…yep, many, many chances.

Despite Pesh being uncomfortable being set up, he found himself liking Megan’s company immediately, she was also in medicine, and that had that in common. They spent the day together at the party and really got to know each other. I enjoyed this part so much, it’s almost rare to actually read about a couple talking. It also came clear how much Pesh loved his late wife. Instead of scaring Megan away, it just made her more attracted to Pesh.

“Who wouldn’t be turned on by a man who feels so deeply that he didn’t stop loving his wife just because she died?”
“Most women don’t want to share your heart”.
“Then they’re obviously insecure. All of us have the ability to love people in infinite capacities. I love my son with all my heart and soul, but there will still be room for a man…someday.”

But right now is not someday. Megan wants sex. She is 25, and she is still in nursing school. She is not looking for any kind of commitment, especially with a man 12 years her senior. But Pesh was already feeling more. So when Megan accidentally drank too much, the honorable Pesh came to her rescue.

“Mmm, Pesh, you wanna be my knight in shining armor?”
“I’d be anything and everything you wanted me to be, if you would give me the chance.”

And when things start getting super hot…Pesh is honorable.

“If I take you, I’ll be making love to you. I’ll have you begging and pleading, but you’ll be coming so many times you’ll lose count. You’ll understand the difference between a quick tumble and the all-consuming power of a physical connection fueled by an emotional one.”

So Pesh wants a relationship, Megan wants to fuck. Plus, they work together. Complicated, huh? Let me tell you though, when they finally give in to each other…..my oh my, I guess being a gentleman has its advantages.

As soon as I finished The Pairing, I hugged my Kindle with a sappy smile and dried tears on my cheeks. Honestly it was close to a perfect read. The only reason why it isn’t a full 5 star read is because it just wasn’t EPIC enough. And that’s OK. It didn’t need to be epic. The Pairing was filled with so many touching moments, lots of love, great kids and family, hot sexy times, good friends, and loads of sappy smiles. This writing style is what had me fall for Katie’s writing in the first place, and this is the reason I can’t wait for more.

Purchase The Pairing by Katie Ashley

The Party is a free book. Though it is a prequel, don’t read it until after you have read The Proposition and The Proposal.

The Proposition | The Proposal | The Party

After her former boyfriend left her pregnant and alone, Megan McKenzie swore off men. She spent the last eighteen months focused solely on her son, Mason, along with finishing nursing school at the top of her class. Although she’s not ready to complicate her life with a long-term relationship, a nice no-strings attached hook-up is just what she needs. At her godson, Noah’s, baptism, she finds the perfect candidate in the soft-spoken godfather, Pesh Nadeen. After all, the widower could use a good time too. But after drinking too much, the night doesn’t end the way she thought it would. Forced to leave Pesh’s house through a walk of shame, Megan hopes to never, ever see him again.

For Pesh Nadeen, the very sight of Megan sends him into an emotional tailspin. Since she reminds him too much of what he has lost, he wants to be out of her sight…at first. But the more he gets to know her, there’s something about the diminutive blonde that causes his protective side to go into overdrive, and he finds himself wanting more. When Megan is assigned to work in his ER to complete her nursing clinicals, he sees it as fate, but she’s having no part of it. She only wants a physical relationship while he wants far more.

What happens next is a sexy game of cat and mouse to see who will break first or if both of them will eventually get more than they ever bargained for.

“Oh, I don’t know if I should be gone that long. I don’t want to take advantage of Ankle’s kindness for watching Mason.”

As Megan raised her brows skeptically, Casey snorted. “Lemme guess, you bribed him sexually to get him to give up a perfectly good Saturday watching two kids who are under two.”

A red flush entered Emma’s cheeks. “I don’t know what you’re talking about.”

Casey laughed. “Oh Em, you are so busted!” Leaning forward, she put her elbows on the table and stared straight at Emma. “So what was it? Green lingerie? A blow job? Maybe a blow job while wearing green lingerie?”

Refusing to meet Casey’s inquisitive gaze, Emma finally murmured, “It was a blow job in the shower this morning, okay?”

Casey snickered. “I knew you had done something. Hmm, that was fun. It was like solving a sexual game of Clue—it was Emma in the shower with a blow job.”

Megan brought her hands up to cover her eyes. “Umm, hello? That’s my uncle you’re talking about.” 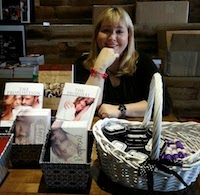 Katie Ashley is the New York Times, USA Today, and Amazon Best-Selling author of The Proposition. She lives outside of Atlanta, Georgia with her two very spoiled dogs and one outnumbered cat. She has a slight obsession with Pinterest, The Golden Girls, Harry Potter, Shakespeare, Supernatural, Designing Women, and Scooby-Doo.

She spent 11 1/2 years educating the Youth of America aka teaching MS and HS English until she left to write full time in December 2012.