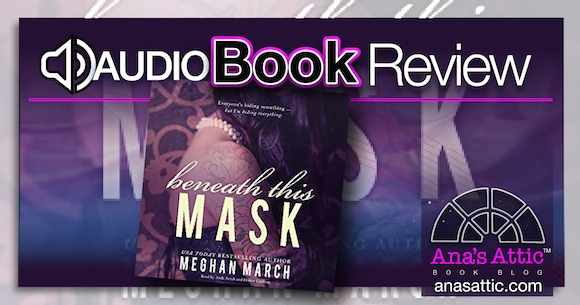 Beneath This Mask by Meghan March

I started reading Meghan March backward, with her hot-as-hell series- (Dirty Girl), then Dirty Billionaire, now the Beneath Series. Obviously I love her mix of story, character development, romance and sexiness. Since she has moved on to my favorite list, I plan to devour all of Meghan March’s books. Beneath This Mask was a great start to a series I look forward to listening to all of.

Charlotte Agoston was a 22 year old New York society girl when her father got caught in a Bernie Madoff type scheme and became one of the most hated men in America. Everything was confiscated by the government, and Charlotte didn’t want to be associated with her father or implicated in any way, so she took off to New Orleans, died her blond hair dark with purple streaks, got numerous tattoos and piercings, and became the very secretive Charlie Stone.

“How does it feel to realize your privileged life has been paid for with other people’s dreams?”
—
“The tattoos had become more than a camouflage to hide the girl I’d once been; they were a declaration that I was never going back..I could never again fit into the life I’d previously led.”

She worked at a tattoo shop in the quarter and had casual fuck buddy sex with the shop owner, but would never get involved with any guy lest they figure out who she was. One day Simon Duschesne brought his friend in during a bachelor party to get some ink, and when he saw Charlie he was done for. There was an immediate spark between the two, but Simon, a former Navy pilot is part of a very prominent family in NOLA and is planning on running for office to take his father’s seat in the next election. When Charlie realized, she knew she couldn’t be with him. He is often in the press, and she can’t be seen in public with him or she would ruin him. Simon doesn’t know what she’s hiding but he doesn’t care. He wants her and continues to pursue her until she needs his help, then can’t resist him.

“I couldn’t help but think that even though his public persona was hazardous to my very existence, it might be worth flirting with danger to steal a taste of the man beneath it.”

Simon was amazing. Patient and understanding, there was no doubt he wanted Charlie. But he wanted  a serious relationship, not just sex, so he refused to make it just about that, and wouldn’t have sex with her until she wanted more than just sex.

“Why am I the guy in this relationship? Why can’t you be as hard up for it as I am?”

I liked how Charlie was so much more herself as ‘Charlie’. I could never imagine her being the rich society girl. She was too cool and feisty.

“The irony of it was, even though I had assumed a false identity, I was finally discovering the real me.”

But Charlie has kept herself closed off for a year and hid her identity so well, all the charm in the world wouldn’t crack her.

“I felt a pang in my chest where my heart was thumping double time. His brutal honesty did what legions of charm couldn’t – it broke through my walls. Demolished my better judgement.”

Oh and Simon…he may have been a little too nice and perfect, but I wouldn’t mind that!

“She was my addiction. I just hoped she wouldn’t be lethal. Regardless, I was in too deep to pull back.”

Beneath This Mask was a sexy, unique story that really transported me to NOLA and allowed me to really get to know the characters in the story. It was a sexy, quick read, and I highly recommend listening to it as I think the narration made it even better. I enjoyed it so much that I downloaded the next two in the series to listen to right away.

Purchase Beneath This Mask by Meghan March

A box set of the first 3 books is available 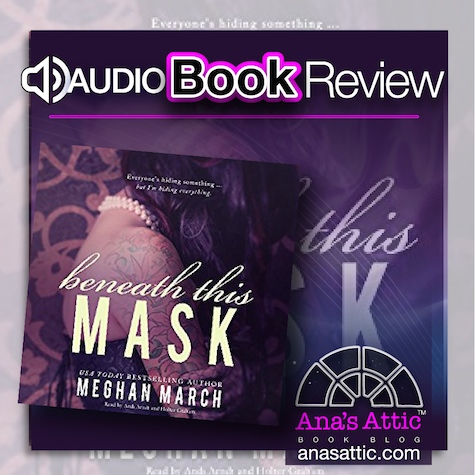