Well, Beth Kery is coming out with an eight part serial novel called Because You Are Mine and it’s going to be BIG. I feel it. This is the next “Fifty Shades of Grey”. Each week, she will release a new novella, continuing the adventures of Francesca and Ian through the month of September. How cool! We will have something new to look forward to each week!

Each week we will celebrate right here on the blog with a giveaway and more surprises, including visits from Beth Kery herself!!!!

From Amazon: From Beth Kery, the national bestselling author of Explosive, comes a red-hot romance like no other—where the rules of attraction are broken with that first electrifying touch. Meet Francesca and Ian. The fantasies of what’s to come begin…

It starts with that first look, when you know you have to have him… Francesca Arno has been commissioned to create a grand centerpiece painting for the lobby of Ian Noble’s new skyscraper. It’s at a cocktail party in her honor that she first meets him—and the attraction is immediate for Francesca. It’s also bewildering. She’s not used to such a wholesale sexual response to a stranger. Enigmatic, darkly intense, with a commanding presence, Ian completely unnerves her. And she likes it.

For Ian, she’s the kind of woman he can’t resist—one that comes all too rarely: a true innocent. But he can sense in her a desire to open up, to experiment, to give herself to the fantasies of a man in control. The first kiss, the first caress, the first challenge for a woman who craves what she’s never had—a man who gets what he wants.

Because You Are Mine Part II:
Because I Could Not Resist

Because You Are Mine Part V:
Because I Said So

Because You Are Mine Part VII:
Because I Need To

Because You Are Mine Part VIII:
Because I Am Yours

This is a really cool concept, as long as everyone knows what they are getting. These are not stand-alone books, they are a serial novel. So basically you get a few chapters or so each book. I love this concept. It’s good to know I’ll have something to look forward to every week. 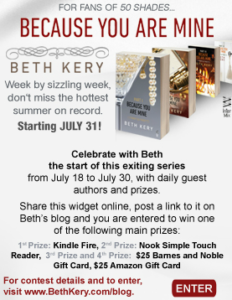