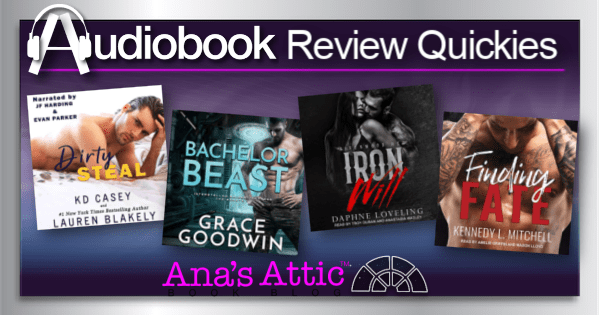 Iron Will by Daphne Loveling

When Derek and Adam first hooked up, they met at a charity function for rescue dogs. They hit it off and spent one great night together. Fast forward and months later Adam is traded to Derek’s team and has to room with him while he looks for an apartment.

Dirty Steal is a novella, and for such a short read, it was a pretty complete story. There was lots of MM sexy times, but it didn’t overwhelm the story. The guys had great chemistry and it came through in the story.

The Narration: KF Harding and Evan Parker are new to me and they did an excellent job bringing this story to life.

Grace Goodwin was supposed to be at a book signing I was going to, so I grabbed her audiobook, Bachelor Beast: Interstellar Brides Program: The Beasts #1. It said #1 so I thought it was the first in a series, but this is a spin-off series.

I think this would be a lot of fun for people who know these characters. It’s about an alien beast as “The Bachelor” on an Earth dating show. Though I was confused about the whole world this took place in, it was still a kind of fun listen. The heroine was plus-sized and had a complex about it. The beast loved her curves. 🙂

The Narration: Tor Thom and Mia Sloan were fantastic. I think they made the book better. He had the perfect big beast voice, and she was an awesome average girl.

Iron Will by Daphne Loveling

This was another book picked up for the signing. Again I didn’t realize that it was the first in a spin-off series, so I probably would have enjoyed it even more had I read the Lords of Carnage Series. But I still really enjoyed this one!

To me, this book was more about 7-year-old Paisley and her mom than the couple. The little girl’s mom left her “home” in a motel with her abusive boyfriend, and when little Paisley went to do laundry to get away from him, she fell down the stairs and wound up in the hospital.

Roark is the VP of a Motorcycle Club and is at the hospital visiting a brother who was stabbed when he hears a commotion in the hall—Paisley’s mom’s boyfriend making a scene. He notices how the girl reacts to him and makes it his mission to keep this guy away from the little girl at all costs.

I love a protective guy and really liked Roark, but I felt like they didn’t get enough page time as a couple, it was more about the girl and her mom. Still, I enjoyed the read and would listen to more in this series.

The Narration: Troy Duran had a great biker voice and Anastasia Watley had the perfect voice of a composed professional. I think their narration added to the story.

Wow, what a story! There was a lot of action and suspense in this one that had me biting my nails into the night. It’s a pretty intense story that explored the sensitive issue of human trafficking in living color.

Fate is a hacker, and after suffering a tragedy, she only wants revenge. She tracks down her target and ends up captured in the African jungle. Nash…gosh I loved Nash. He’s sent in to rescue her and they both end up in a horrific situation.

Finding Fate had twists and turns that kept me biting my nails and listening all night. It was a much darker book than what I usually read, but it was so exciting, I loved the change.

The Narration: Mason Lloyd talks very slow. I had to speed this up a lot more than usual, and whether slow or fast, his voice is a bit too mechanical sounding for me. Amelie Griffin did a great job as Fate aka Poppy. 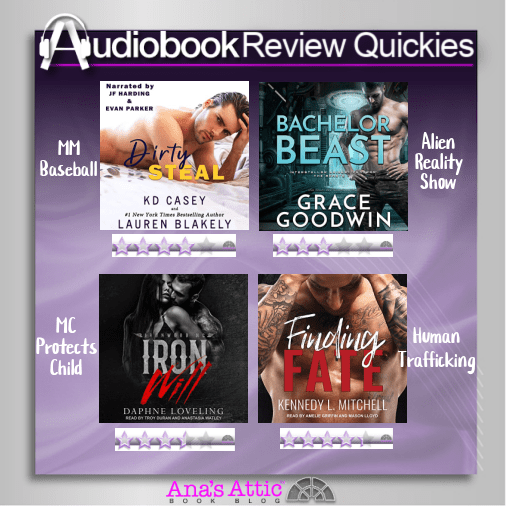