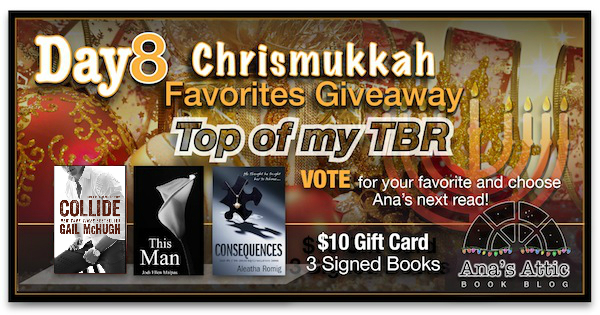 For the last day of Hannukah, I decided to do something different. There are so many series that I have been dying to get to, and just haven’t yet. I used to read 5-6 books a week, but between Ana’s Attic, Starting on Monday, Wicked Book Weekend, and my kids, I barely have time to do anything else but blog! So these series have sadly sat there…gathering dust on my Kindle.

I try to stay organized. I even had cute little TBR pads made (win one on Facebook today!)

I knocked some big ones off though. I have read some of Nicole Edward’s Club Destiny and Alluring Indulgence Series, I read some of Kristen Proby’s With Me in Seattle Series, some of Michelle A. Valentine’s Black Falcon Series, and some others. There are a few series that haunt me though! I want to read them, but I know I have to read them all, and I have so many requests it’s hard to  drown in a whole series.

Whatever series wins the vote is the one I’ll read next. 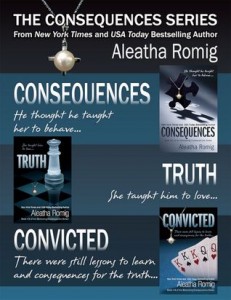 The first Series I’ve yet to get to is Aleatha Romig’s Consequences Series. I’m going to see Aleatha at Wicked Book Weekend, so this one is really high on my list. I must say though, I’m a little scared. I have heard it’s dark, and though I may think it’s an amazing book after I read it, I like to read to be happy, which is why I have held off.  So many of you love it. There are plenty of dark books I have fallen for, I need to just stop being a pussy and jump in.

Here is the blurb from Book 1, Consequences:

In an unfamiliar bedroom within a luxurious mansion, Claire Nichols wakes to memories of a brutal abduction. All of her recollections have one common denominator, the man she just met—Anthony Rawlings. Unbeknownst to Claire, Anthony has had her in his sights for a long time. Every action has consequences—and his actions resulted in their chance meeting.
Facing incomprehensible circumstances, Claire must learn to survive as she comes to terms with her new reality—every aspect of her livelihood is now dependent upon the tall, dark-haired, dark-eyed tycoon. Anthony may appear to the world as a prosperous, benevolent, kind businessman, but in reality Claire learns he is also a menacing, controlling captor with very strict rules: do as your told, public failure is not an option, and don’t divulge private information. Failure to follow these rules and more, are met with serious consequences.

In an effort to earn her freedom, Claire learns her lessons well and before long, she unknowingly captivates her captor. Anthony/ Tony reluctantly becomes enthralled with Claire’s beauty, resilience and determination. Their interaction instigates strong emotions, including—fear, anger, love, and lust—as their journey flows into uncharted waters of intrigue and passion.
From the opening criminal abduction, through the twists and turns, to the unlikely romantic thrills, the suspense climaxes as Aleatha Romig utilizes vivid detail, allowing this novel to unfold like a movie.

Can you put the pieces of the puzzle together? Claire Nichols abduction wasn’t a random act—did she learn her lessons well enough? Will these unlikely lovers remain true—or will she learn the truth before it’s too late?

Or Purchase the whole set: 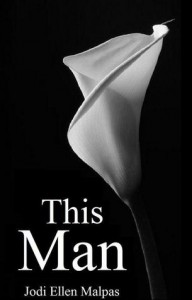 This Man Series by Jodi Ellen Malpas has been on my list for a year! I keep hearing that Jesse Ward is the shit, and that he also looks like one of my favorites, Jessie Pavelka (who was my choice for Christian Grey). I also hear that there is a crazy heroine and a controlling alpha. I like controlling, but I have heard it’s a bit excessive! Crazy girls, well, my son went out with one, lol.

But hearing a series is awesome but you might need therapy after is a little scary! Again, I’m a wuss.

Here is the blurb for This Man, book 1:

Young interior designer Ava O’Shea has an appointment for a first consultation at The Manor with the owner, Mr Jesse Ward. She is expecting nothing more than an overweight, cravat wearing, well-to-do countryman, and on arrival, nothing would suggest otherwise. How wrong could she be? This Man is devastatingly handsome, charming and confident. He is also a conceited, hedonistic playboy, who knows no boundaries. Ava desperately does not want to be attracted to him, but she can’t control the overwhelming affect he has on her. Every instinct is telling her to run, so she does, but Jesse Ward is not so willing to let her go. He wants her and is determined to have her. She knows she is heading for heartbreak, but how can she run when he won’t let her? 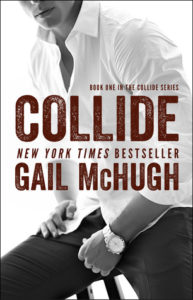 The Collide Series by Gail McHugh. I met Gail at my last Wicked Book Event. She was so freaking nice! I planned on reading this and many others before I met the authors, but was too busy planning the event to read. It’s still on my TBR.

Words like “love triangle” and “loved it/hated it” and “infuriating but amazing” are some of the things I have seen to describe this series, yet all of those people love it anyway. I really hate deliberate cheating, so seeing the words love triangle scares me, but not quite as much as the other two series on this list.

Here is the blurb for Collide, book 1:

Colliding with a second chance…

On the heels of graduating college and trying to cope with her mother’s death, Emily Cooper moves to New York City for a fresh start.

While harboring secrets of his own, Dillon Parker takes care of Emily through her grief. Knowing he can’t live without her by his side, he’s sweet, thoughtful, and everything Emily has ever wanted in a man.

Until she meets Gavin Blake—a rich and notorious playboy who is dangerously sexy and charming as hell. Emily tries to deny the instant connection she feels, but Mr. Tall, Dark, and Handsome is not inclined to let go so easily. Recovering from his own painful past, Gavin will stop at nothing to win Emily over.

This unexpected encounter compels Emily to question her decisions, forcing her to make a choice that will destroy friendships, shatter hearts, and forever change her life.