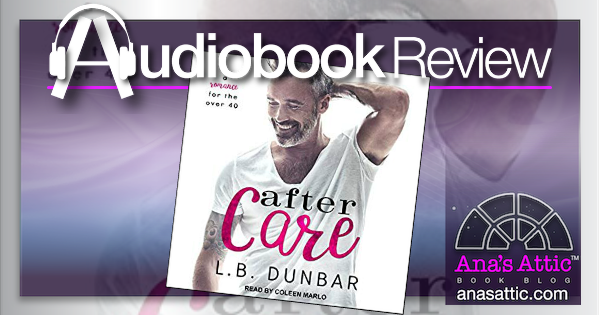 After Care by LB Dunbar

First in a Connected Standalone Romance Series for Women Over 40.

I absolutely LOVE a book where the couple is over 40! Being a mom of a 20-year-old touring musician, many of the stories I have thought about have to do with an older rock star. So imagine my surprise when I read After Care by LB Dunbar! She wrote the book I’d been thinking about! Now I get to enjoy the fruits of her labor without the work of writing it. LOL!

Edie Williams is a 43-year-old breast cancer survivor. After 20 years of marriage, hers ended while she was going through cancer. Now in remission, with her hair starting to grow back, she takes a vacation to Hawaii with her two grown kids. She is befriended by a young woman traveling with her kids, who turns out to be the wife of a rock star. The whole band is there on vacation, including her Uncle Tommy, the band’s manager. 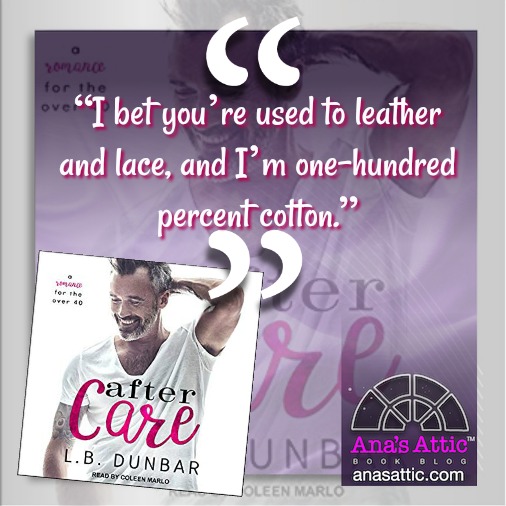 Edie has some self-esteem issues, and I could so relate to her! Not only has she not been naked in front of a new man in 20+ years, she just has a mastectomy and implants. Her hair is just starting to grow back. She is a survivor, but those kinds of things are hard to overcome when faced with getting naked in front of a gorgeous charming playboy, even if he is in his 40s. (WHY do men get better as they age? I mean LOOK at the cover! Can you say HOT?)

“I knew Tommy Carrigan was going to break not just my heart, but all of me”

Since the story was only from her POV, there was only one narrator. She was great at doing Edie’s parts, but Tommy’s parts came out sounding totally cheesy and most of the time, not at all sexy. Now here is where I had trouble. I am not sure if it really was cheesy or not because I can’t separate the narration and the story in this case. The references to age seemed deliberately added, and it made it feel even a little cheesier.

“Actually, you look like a fine wine, aged to perfection, sweet on the palate and lingering on the tongue long after you’ve been swallowed.”

Tommy was quite the dirty-talker. I usually love that, but it just didn’t work that well in her voice and his lines just seemed so much like lines rather than feelings. I felt like he pushed her further and faster than she was ready. I did enjoy the overall story though. I love the way they tried to keep it a vacation tryst and it became more. I love the side characters and family dynamics. I love how Tommy brought out the inner spirit of Edie. She so needed and deserved that.

“You’re igniting dreams I didn’t know could exist for me, Edie Williams.” 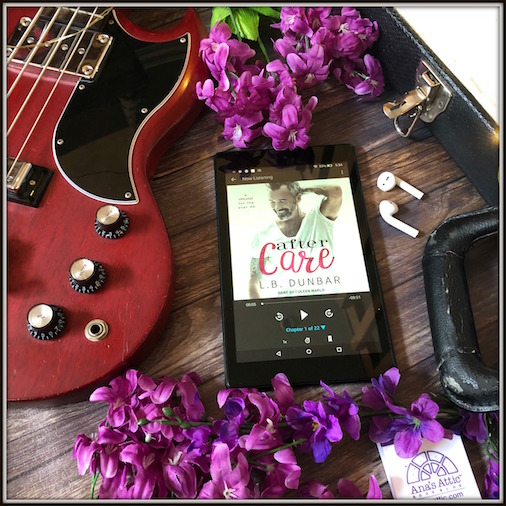 It was single POV. The narrator was great with the female parts, but I was not thrilled with the execution of the male parts at all.

I love love love that L.B. Dunbar wrote another book about a 40+ couple. Making it about a cancer survivor with some totally legit insecurities made her even more relatable. I totally loved Edie. Tommy was a dirty-talker with some secrets, and I found him to be a little cheesy, but I am not sure if that is from the narration or his dialogue or both. Even so, I still totally enjoyed the story, and look forward to reading Midlife Crisis, about another 40 something former rocker.

One other thing. Maybe because I’m 51 and not grey with very few wrinkles, I feel like calling someone in their early 40s a “silver fox” was a little misleading (I guess I assume that means an older man 50-60). My husband didn’t have grey till his mid-50s either. I also went with my son when he toured with the Allman Brother’s drummer at 69, and a rocker in their 40s is usually in the height of their career. I feel like these characters might be aging a bit before their time. The next is about a character named Midge. My grandma had a friend named Midge. She would be about 100 now. Over 40 does not mean OLD! I do understand that there has to be references to their ages, but 40s, to me, is still in the prime!

Purchase After Care by LB Dunbar