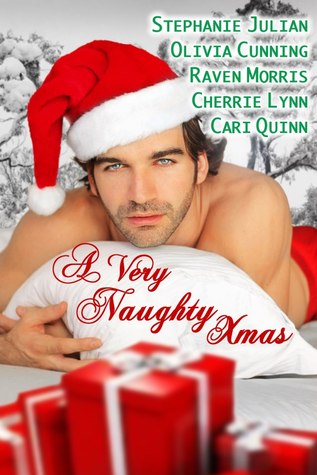 NOTE: This anthology is no longer available, but many of the stories inside are, and are linked up here with the reviews.

A Very Naughty Xmas is an anthology of 5 short stories written by Olivia Cunning, Cherrie Lynn, Cari Quinn, Raven Morris and Stephanie Julian. I bought this book because 2 of my favorite authors, Olivia and Cherrie have stories in here that are part of their series. Olivia has a prequel to the One Night with Sole Regret series, and Cherrie has a great story from the Ross Siblings/Leather and Lace series.

Let me start by saying this book should be renamed “A Very Porny Xmas”. Naughty is way too mild for this book! This was DIRTY. In fact one story was so dirty I felt like I needed to wash my phone after (I read on my phone). You guys know I love me some smut. But damn….there is smut and there is porn. The entire book was a little more porny than just smut, but the stories from authors I’ve read, where I was already familiar with the characters and their backgrounds didn’t seem as dirty. Christmas is definitely an afterthought in all of these stories.

I will rate ALL of them a 5 for heat.

Jingle Ball by Cari Quinn: I enjoyed this story. Wendy is the receptionist at a real estate office and totally crushing on her boss. During the Christmas party he finds her in the other boss’s office touching herself. So he calls in the other boss, and a ménage at the Christmas party begins. Not just a regular ménage, a ménage with 2 Doms who want to “punish” her for touching herself (they can punish me too!). These Doms were also a bit into each other. But when one of them overhears her telling the other receptionist the next day that her new guys may be gay, they decide to prove her wrong again. This time tying her up with garland and lets just say………uuuummmm……..I never thought candy canes could be used that way. But at least her vagina was minty fresh!

I will never feel the same about candy canes.

I will definitely read more by this author. It was a totally hot read, and the author managed to put a little story and character development in with the naughty stuff.

Rating for Jingle Ball by Cari Quinn: 4 stars (for a dirty short story)  **This has been republished under Taryn Quinn, edited and has an epilogue.

Christmas is Coming by Raven Morris: Wow. This wasn’t just dirty and naughty, I might use nasty to describe it better. Usually I love a book with a happily married couple that is into some adventurous sex. I even liked the storyline, but Debra’s overwhelming love for how her husband (and everyone else) tasted, and sex in general, was just over the top.

Debra and Jack have a very happy, very sexual marriage. Good for them! The scene is set with a pretty hot but very dirty scene between the two of them. But the way Debra worshipped his cock and how he “Filled her mouth with his hot, salty, amazing flavor, the thick fluid coating her tongue…” and she was just “creaming” all over the place, it started to gross me out a little.

For her birthday, Jack had brought his friend David over for a ménage, and Debra wanted to give him a Christmas gift that rivaled that. So she invited her girlfriend for Christmas dinner. Turns out Jack had the same idea, and brought David back for Christmas as well.

Rating for Christmas is Coming by Raven Morris: 1.75 stars (NOT AVAILABLE)

Light Me Up by Cherrie Lynn: This is about Brian and Candace from Rock Me. I advise that you read it after Leave Me Breathless. See the reading order for the Ross Siblings/Leather and Lace series here. I loved this story. It was by far the tamest in the book, but still hot as hell. Maybe this is because I already know and love the characters, but also because I love Cherrie’s writing. This story was still dirtier than any of her books, but very romantic, and a must-read if you have read the series.

I think I’m adding this to my Christmas list

Her mom also corners her asking if she and Brian plan on getting married, and she finally seems to accept that Brian is her future. Brian and Candace even sneak away during the party for one hot, sexy scene and almost get caught.

The next part has Brian doing a nude drawing of Candace. The scene was dripping (haha) with sexual tension, and ended with a super hot scene. It is so clear how much these two love each other, and the sex is very hot and kinky, and just the two of them. (This is the only story in the book with just 2). His piercing is becoming more and more of a bucket list item for me…….

Turns out Brian has an amazingly romantic Christmas gift for Candace. I just loved this story. It seems Cherrie can do no wrong in my book.

Rating for Light Me Up by Cherrie Lynn: 5 stars  *Now stands alone

An Indecent Proposition by Stephanie Julian:

This story was interesting, hot (of course) and left me wanting to know more. Erik and Keegan are millionaires who have been best friends (and shared women) since boarding school. They both own a company together, but Erik was horribly injured in an explosion 3 years earlier. After 5 reconstructive surgeries, he has given up on fixing his scars and hides in the shadows. Until the company Christmas party. He was watching from afar and found himself ridiculously attracted to a waitress from the catering company, Julianne.

Erik had Keegan arrange to offer the woman $500,000 to come over and have sex with him while Erik watches from the shadows. But when she shows up and begins to have sex with Keegan, she can feel someone watching and lures him out of the shadows, where she doesn’t react the way most people do, with fear and a cringe. She welcomes him in and the three of them have an evening filled with 3-way.

Poor Erik. I felt really sorry for the guy, and was really hoping he would get an HEA out of this, but the stories are all short, so we don’t know what happens next. I would be very interested to read a continuation of this story.

Rating for An Indecent Proposition: 4 stars  *Now Stands Alone and is often FREE.

Share Me by Olivia Cunning is actually a prequel to the One Night with Sole Regret Series (see the series order here), so you don’t have to worry if you haven’t read the series yet. Lindsey and her best friend Vanessa are at a Christmas Eve benefit concert by Sole Regret. Of all the guys in the world, Owen, the bass player, is at the top of her “fuck-it” list, with Kellan, the rhythm guitar player in the number 2 spot. The “fuck-it” list is the top 3 guys you can fuck with no consequences, whether you’re married, pregnant or half dead, for those guys, you have a free pass to slut it up with no consequences.

After the show they follow the tour bus out of town and through a mountain pass where a blizzard gets out of control. When the bus turns into a rest/scenic area to wait out the storm, the girls follow. They are invited onto the bus to spend Christmas Eve with the band.  And holy crap, they spend it with the band, with each other, and even with the bus driver! 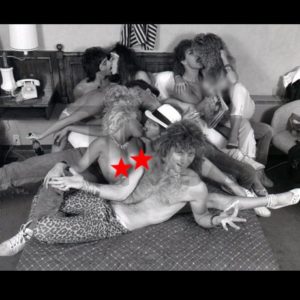 Most of the scenes, however were with Lindsey and her 2 top fuck-it list guys, Kellan and Owen, who have a strange “ritual” they do together. They are also both very into shibari (artistic japanese rope bondage) together. The scenes were hot as hell and the whole story had a lot of the humor Olivia Cunning is great at throwing in to her stories. This story made me look forward to the next two books in the Sole Regret series, starring Owen and Kellan.  *Now Stands Alone