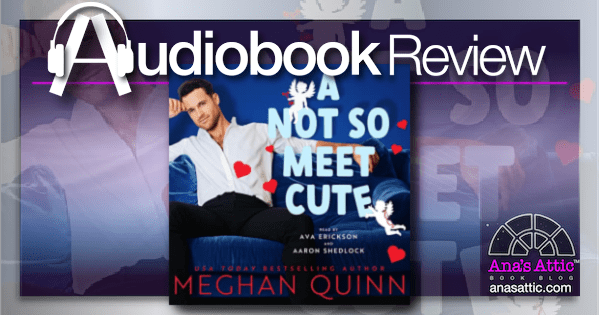 A Not So Meet Cute by Meghan Quinn

Romantic Comedy. Stands alone but there is a follow-up related book.

Meghan Quinn has always been a favorite of mine so I try not to miss any releases. But sadly I missed A Not So Meet Cute back in November and decided to catch up on it before So Not Meant To Be releases.

The blurb tells most of the back story of this “Pretty Woman” themed story. Lottie was just laid off from her job, needs to move out of the place she is in, and needs a date for her high school reunion. Desperate, she says she is going to take a stroll down a millionaire’s block and catch a rich husband.

Huxley Cane is a tech billionaire. He is trying to be relatable to a potential client and blurts out that he is engaged and expecting a child when he doesn’t even have a girlfriend. Then he runs into Lottie in front of his house and sets up a meeting to discuss a proposal.

Kelsey: Oh my God . . . you’re going to be murdered.
Lottie: No way. The dude is meeting me at Chipotle. He’s not going to murder me at a place where you have to pay extra for guac.

He needs Lottie to pose as his pregnant fiancee, and he offers her a hugely lucrative deal. But the story starts with them very much at odds with each other. At first, I loved the banter. Enemies to lovers is my favorite trope for the banter. But about midway through the book, it got a little tiring. Huxley did so much for Lottie and she was still so confrontational.

“If I found the right woman, I’d be far more interested in fucking her against every surface of my house rather than answering monotonous emails or buying a business partner a drink.”

When they finally realized they were better together, HOLY HELL, there was some HEAT in this book! More than the average Meghan Quinn book and it surprised me based on the cover. I expected it to be more mainstream. I can’t believe I’m saying this, but I think there may have been a few too many sex scenes because I wanted to get on with the story, and I also because I couldn’t stand when Aaron Shedlock did the sex scene parts with the female voice.

Though I really loved both narrators, I found it kind of cringe when Aaron did the female voice during the sex scenes.

I really enjoyed A Not So Meet Cute by Meghan Quinn. It’s not my favorite of her books but I still enjoyed listening to every moment. I laughed a lot and let me tell you, it was HOT. It was a little silly and completely unrealistic, but that doesn’t bother me—I don’t mind over-the-top in my romcoms. So Not Meant to Be just released, and that’s my next listen!

Purchase A Not So Meet Cute by Meghan Quinn 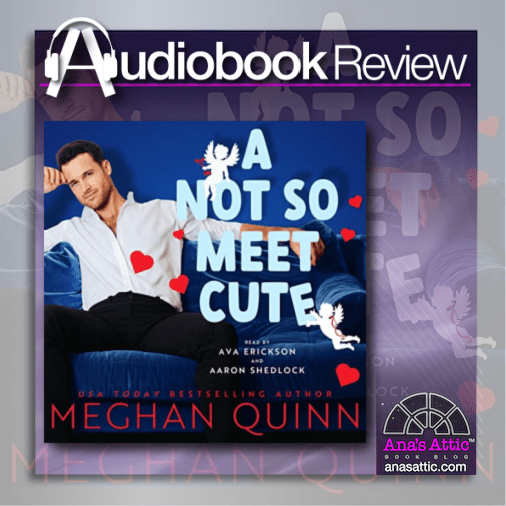