Until I Break by M. Leighton is LIVE today, and I really look forward to reading it! I know we have a lot of good ones this week, but this one seems pretty awesome. 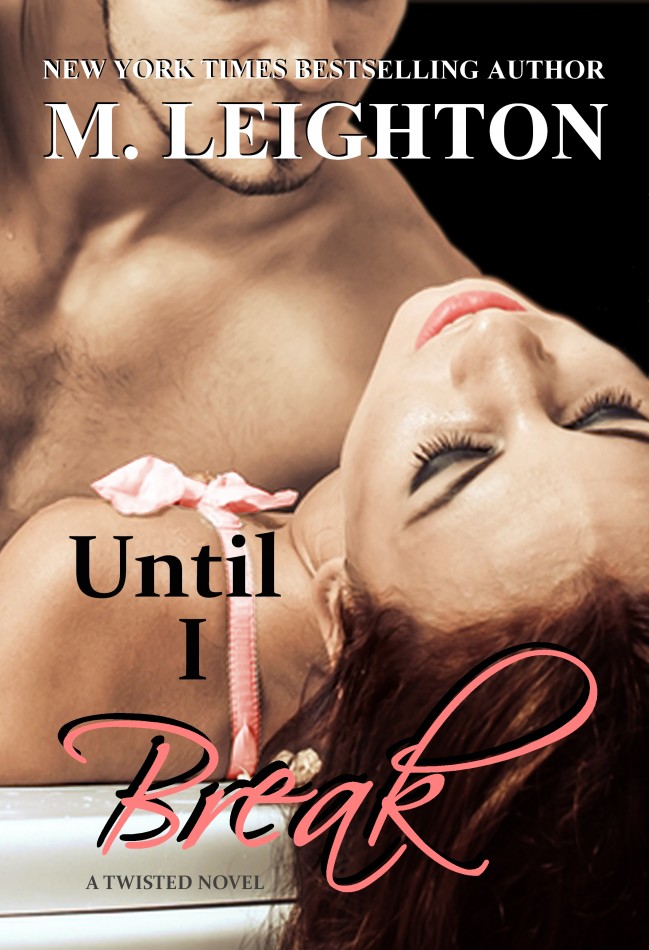 Laura Drake is an author.  She writes bestselling paranormal romances that continue to top the charts.  She is sharp.  She is confident.  She is in control.

And she doesn’t exist.

Samantha Jansen is the woman behind the wig, the woman most of the world doesn’t know exists.  She is shy.  She is insecure.  She is nothing like her main character or her alter ego.  She is scarred—deeply scarred—by a past she can’t let go of and a present she can’t make peace with.

Samantha’s dreams are consumed by one man, the broken hero from her books.  Mason Strait is both her wildest fantasy and her most terrifying nightmare.

When Samantha meets Alec Brand, a corporate consultant, it is as though Mason has come to life.  Alec is handsome to a fault, as elegant as he is arrogant, and more intense than any man has a right to be.

Samantha is soon sucked into a world that mirrors the fiction she writes.  Just like her main character, Daire Kirby, Samantha finds herself unable to resist the forbidden lure of Alec.  And just like Daire, she also finds that she is faced with taking a chance on a man who could either set her free or destroy her.

The scale tilts toward destruction when Samantha finds out that Alec is as much a work of fiction as Mason.  And he has scars of his own, scars that could ruin them both.

I know from lots of experience to let Ari sort out all the clamoring and select the next person to ask a question.  So, patiently, with hands folded demurely in my lap, I wait.

It’s odd, the comfort that I feel in the wig, glasses and heavy makeup.  My Laura Drake get-up is much more than a disguise, it’s a shield—a protective barrier that keeps the world out and the tender Samantha Jansen (the real me) in.

As my eyes drift through the crowd again, they’re drawn to the back of the room, to a latecomer.  I feel my jaw go slack and, slowly, the earth stops spinning, grinding to a halt.  For a moment, it’s as though the entire world is as breathless and reverent as I am.

My first thought is that someone has managed to find the exact image I have of Mason Strait, the one that’s only ever been in my head and in my darkest dreams, and send him here as a publicity stunt.

Even from this distance, I can see that his eyes are a soft, pale green.  They’re framed in thick, jet-black lashes that match his jet-black hair. It’s cut much like I imagined it would be—business short. It’s a little mussed at the moment, like he’s run his fingers through it a few times, but that just makes it look even more like Mason’s.

His lean face is tan and his cheeks are covered in a light dusting of five o’clock shadow even though it’s still early afternoon.  His lips are perfectly sculpted and his jaw is square.  He even has that engaging dimple in his strong chin.

As my stunned eyes travel away from his face, I’m astonished that he’s even dressed like Mason might be when he’s out prowling around—casual, non-threatening.  Sexy.

His broad chest is covered in a white button-up shirt that looks like it’s made of expensive brushed cotton.  His long, muscular legs are clad in faded blue jeans that look like they were cut and sewn with his body in mind.  And on his feet?  Nothing less than dusty cowboy boots.

This can’t be happening!  I think just before voices penetrate my thrall.

People are calling my name from all over the room, people vying for my attention, people anxious to ask me a question about my books, my life or my characters.  I glance around at several of the faces.  Temporarily, they distract me from the breathtakingly handsome man at the back of the room.

Within seconds, my gaze is drawn to the back of the room again as if pulled by a magnet.  The doorway is empty now.  The bottom drops out of my stomach, so keen is my disappointment.  I suppress the urge to jump out of my seat and run through the crowd, out the rear door to see if I can get one more glimpse of him.  I feel desperate for one more glimpse of my Mason.

Ari’s voice brings me back to my purpose here.  “You, sir,” he says in his authoritative voice.

Ari Nelson is my friend as well as my publicist.  He has strawberry blond hair and a no-nonsense way about him.  He makes calm out of chaos, reason out of randomness, and he can wrangle a raucous bunch like nobody’s business.  He’s a thousand kinds of wonderful and he prefers his men much like I do—dark and strong.

“Ms. Drake, does inspiration for your stories stem from personal experience?” The smooth voice causes chills to erupt down my arms and I search for the corresponding face in the crowd.

My eyes stop on a familiar face. His lips aren’t moving, but I have no doubt whatsoever that the velvety voice belongs to this real-life Mason.  He’s easy to spot, as he stands a few inches taller than everyone around him.  I had been so focused on the doorway that seemed to have swallowed him up that I didn’t see him standing at the far edge of the crowd.

But now, I can’t see anything else, anyone else.

His eyes are locked on mine, waiting.  They aren’t smiling or flirtatious, or even curious; they’re just…intense.

When I don’t answer immediately, he asks another question.  “Are you Daire Kirby?”

As my mind spins over his words, he watches me. I get the feeling he’s trying to see inside me, trying to find the truth, to find the softest, most vulnerable part of me and expose it.  Just like Mason would.

The physical similarities between this man and my fictional leading man leave me breathless.  The similarities that seem to float just beneath the surface leave me terrified.

Although I’ve answered his question dozens of times and have memorized a nice, pat spiel to address it, my mind goes blank.  It’s as though the only thing I’m aware of is the invisible thread that this man has, within seconds, tied around some battered part of my soul and is using to pull me toward him like a puppet on a string.

It’s quiet around us as the others in the room await my answer.  When I give none, “Mason” moves forward.  I watch, completely immobilized, as he fluidly weaves his way through the bodies until he’s within a couple of feet of me.

He looks up at me where I sit on the stage, his familiar green eyes stripping me bare in front of all these people, and he asks the one question that scares me more than anything else.  “Are you looking for your Mason Strait?”

I’ve asked myself that same thing over and over and over again.  Do I want to escape my past?  To forget it and move on like it never happened, like it hasn’t affected me?  Or do I secretly want someone to take me back to it, to explore it with me?  To free me inside it?

I still haven’t said a word when Ari speaks, bringing me back from…somewhere else.

Translucent jade eyes never leave mine as the stranger leans forward, extending his hand.  It seems he’s introducing himself to me rather than answering Ari’s question.  What I don’t think this man realizes is that he’s giving my dreams and my nightmares a new name.

Purchase Until I Break by M. Leighton (Adult Contemporary Romance)

💜 STACK FOR A CAUSE 💜 May is Lupus Awareness

Tara Sivec is the Queen of Romantic Comedy. I’ve

Ooooh! I love getting my monthly @thebookwormbox w

HAVE YOU HEARD THE NEWS?? My favorite audiobook au

My fur babies are taking turns snuggling with me.

HOT MESS by @emmahartauthor is LIVE and in KU! We

“I see you, Bell. And everything about you is be

I think this may have been my favorite @thebookwor