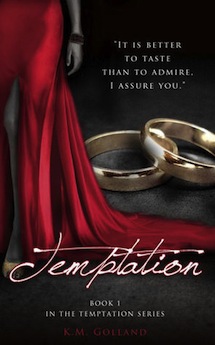 I need to preface this review with one thing. Those of you who have been reading my blog a while know that I HATE a cheater. I was one of the people who, despite loving Kellan Kyle, did not love Thoughtless because there is cheating. So when KM Golland asked me to review her book, I was wary. She said it wasn’t straight up cheating…so I went in with a little trepidation.

I was instantly hooked into a story with a very relatable heroine, and a hot, sexy, smirky, irresistible millionaire. Alexis is a happily married mother of two who just lost a big chunk of weight and is heading back into the workforce after 9 years. She gets a job as a Concierge Assistant for a very high end hotel, where the owner, Bryce Clark (said gorgeous hunk of millionaire) resides. The connection between Bryce and Alexis is electric and instant.

“Aahhhhh Ms Summers the pleasure has been all mine.” He stepped backward and nodded whilst giving me that ‘smirk’.
“Oh Mr Clark, by the way, it’s Mrs not Ms.”
Putting two fingers to his lips he winked and turned. “I know,” he called behind him, and then he was gone.”

Alexis’s inner voice was hysterically funny as she fought her attraction to Bryce.

“Oh shit, he is magnificent. I could only see his back and that was enough to make me blush and fumble with my clothes. What am I doing? Stop it Alexis you dirty little perve.”

“His biceps were simply mouth-watering, and those legs! I could imagine having those wrapped around me in a hot steamy bath. Alexis, I think you just drooled on yourself.”

But while she thought he was hot, she was happily married to Rick. But Bryce gets what he wants, and his gorgeous smirk, millions of dollars, and hell of a bunch of charm get directed toward Alexis, big time. His creepy stalker ways have him knowing everything she loves, and he is determined to have her.

Right away (no spoiler), Bryce promotes Alexis to be his personal assistant, with an offer she can’t refuse. And when they are together, the sexual tension is crazy!

I found myself angry at Alexis, despite my liking her. In my opinion, if you are married, and in a situation where you are that attracted to someone, you need to never see that person again. PERIOD. But that’s just me, and this is a fictional book, so I’ll continue. It was a great job opportunity for AMAZING pay, so it’s not easy to walk away. Especially when you are lusting after the guy yourself. This is the meaning of temptation: (Who can turn this down from a gorgeous millionaire?)

“Every single entire ounce of me wants to grab you and kiss you until our mouths are dry, then I want to rip your dress from you, take your underwear off with my teeth and kiss every inch of your fabulous body, paying a lot of attention to your sexy arse, gorgeous tits and moist…”

This is a situation that is pretty relatable. It’s easy to be in her shoes and think “what if?” No matter how in love you are with your husband, when a gorgeous, rich, charming, likable guy turns on every drop of charm for you….can you resist?

I loved the voice of the heroine. Sometimes her inner voice it got to be a bit much, but really, so does mine! Ha! This book had so much of what I LOVE in a book. Witty, flirty banter, a sexy, takes-what-he wants stalky, alpha millionaire, a relatable heroine, and hot sexy sex. Despite what the author says though, to me, there is pretty much cheating. I feel bad, because in this book, the cheating didn’t bother me as much as much as it should have. Perhaps because I didn’t really get to know and like Rick enough. But he was a good guy and a good father, and Bryce was basically trying to be a home-wrecker. There are kids involved! So I found myself torn…liking it, but feeling guilty for doing so. (Personal note here: my husband’s name is Rick, so that may have helped with the guilt!)

The story moved fast and wasn’t very long, and I am very curious to find out what else happens. This has very high ratings on both Goodreads and Amazon. Don’t let just my stars guide you. For me, it was the editing and the language that I had the hardest time with, but I read the story like the greedy whore I am, and still lapped it right up.

“I heard a quote once, by memory it was by Mr. Johnny Depp, it might pertain to you – If you are in love with two people, choose the second one; because if you really loved the first one, you wouldn’t have fallen for the second.”

*Note: this book was given to me for review by the author. Her response to the review, in part: “Being that Temptation was my first ever attempt at writing, I have learned a lot since publishing it. I.e. the issues I did not address in book 1 I’m confident to say I have addressed in book 2. Editing being the first (I secured a few Beta readers for book 2) The second being the reason why Bryce fell for Alexis in the first place; as Satisfaction opens up with a Prologue in Bryce’s POV, giving you a good idea of why he is attracted to her.” She also said she toned down the ‘Australianisms’ while staying true to her roots. Well, that just makes me want to grab Satisfaction right away!