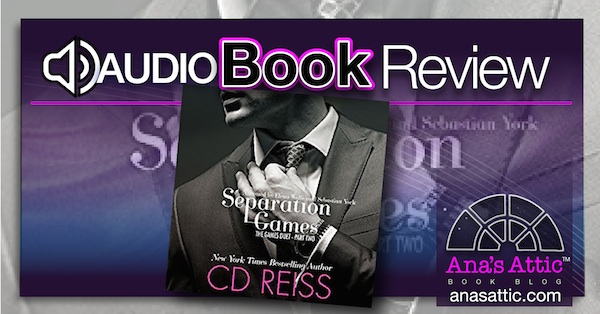 Part Two of a duet. Does not stand alone.

Separation Games is the continuation of Marriage Games by CD Reiss, which was one of my top books/audiobooks of 2016. If you haven’t read that yet, this review will bring some spoilers to the first book. It’s important for me to start this review with the fact that I listened to the audible duet, because I think it does color my feelings a bit. Sebastian York is my favorite male narrator. But 90% of the books I have listened to with him in it are romantic comedies where he is just an all-around good guy who is hot in bed. So his voice brings those pre-conceived notions to Adam, making him, possibly, seem like a nicer guy than if it were an unfamiliar narrator.

Another audio note, before I move on to discussing the story—Marriage Games was narrated in duet style, where the characters actually were in the room together, conversing. Separation games was dual POV narration. She narrated her inner thoughts (and said his lines) during her POV, he did his during his. This worked brilliantly since most of the book was Diana’s POV, at least the first half.

“He’d agreed to an easy divorce if I gave him thirty days. Sixteen were gone. It had taken me that long to love him again. The real me loved the real him. It had taken that long for him to fall out of love with me.”

As much as I loved the first book, and think the writing is absolutely amazing, I have mixed feelings about Separation Games. I basically couldn’t stand Diana, and after a while stopped rooting for them. 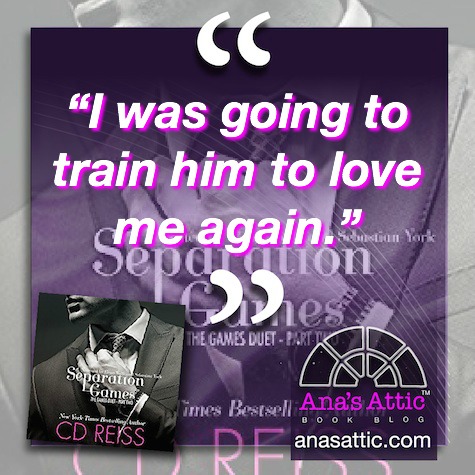 Though Diana is training to be a sub in Separation Games, I found her to be so calculating and manipulative that it never quite seemed like she was really submissive. And the biggest question in my head the whole time was “Why can’t they just compromise? Play kinky D/s bedroom games but live a vanilla life?”

The book was very heavy from Diana’s POV, and I really missed Adam. I missed alpha Adam, but when we see Adam in Separation Games, that Dom seemed a lot more subdued.

“Manhattan Adam loved me, and I still didn’t love him.”

This quote illustrates what basically ruined the book for me. It made me feel like she only loved him for the Dom in him, and she seemed pretty willing to go find someone else to do the job if he didn’t.

“You made me like this. You woke me up. You dragged me out of the darkness and now you don’t want me in the light. Well, fuck you.”

I missed the eroticism and connection of the first book. And when Adam showed that part of himself, I loved it.

“Don’t touch yourself. I own your pleasure.”

I never really thought Adam stopped loving her. In his mind, he couldn’t love a sub, but is she really a sub? Or just his Diana?

“He wanted me. His body wanted me and his heart called for me, but his mind had decided to cut me loose.”

I realize from the name of the books that games are a big part of this, but I felt like Diana was playing games a lot more than he was. She was so wishy washy, but it always seemed to be about HER. Shouldn’t submission be about pleasing HIM?

“I brought my hands around, and with my forehead still on the floor, I unbuttoned my pants and pulled them down, exposing my ass. The shame of it was overwhelming. To talk to my husband by showing him the ways he could fuck me was a deep humiliation and the only option I had.”

Does that seem like it’s something she wants to do? What made her think that is what he wanted? I feel like their communication was so broken, and there was never a thought or mention of compromise. But I was left thinking that Adam never really stopped loving her, and she never really loved Adam, just the Dom.

I have been married 26 years. We have had good times and bad times. During a down time I was sure I fell out of love for him forever but we worked our way back. So I am aware that there are a lot of ups and downs and role reversals in marriage, and I think CD Reiss really brought that out nicely. Her writing is incredible and she can write some HOT sex. I just find that I need to really love a heroine to love a book, and as hard as I tried, I never really warmed up to Diana even a little.

Marriage Games was one of my favorite audiobooks of 2016. Unfortunately, the small things that bothered me a little bit in the first book were magnified by a thousand in Separation Games. The main thing was that I just didn’t like Diana. It was a good story, well written, extremely complex and had a lot of emotion, but I have problems with manipulative heroines and Diana was extremely manipulative. I never quite bought that she wanted Adam for Adam rather than for his business skills or Dom skills. I am torn on the rating here, because it was a very compelling, well written story, but I need to love my heroine more. This may be a case of “It’s not you, it’s me”, but I just never really believed they were made for each other.

See my review for Marriage Games 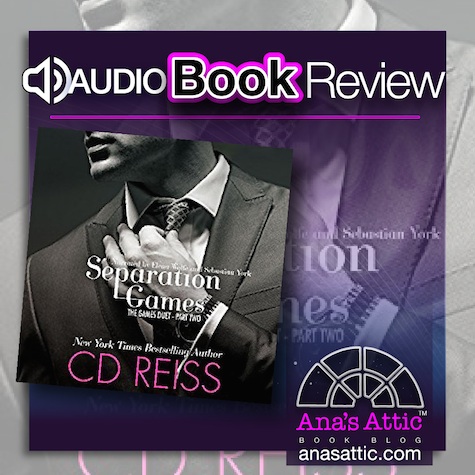