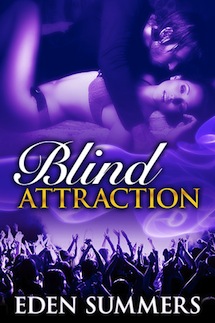 When I was invited to be part of the blog tour for Eden Summer’s Blind Attraction, I jumped at the chance. I really loved the last book I read by her, Concealed Desire (See my review), and this book, Blind Attraction, has the added appeal of being a Rock Star book! Mmmmmm…..yes, please! But I was at a point where I had read a lot of Rock Star books lately, and getting a bit bored with them. (See Top Picks: Rock Star books)

Blind Attraction was great! At no point did I think it was ‘just another rock star book’.

Mitchell Davies is the lead guitar player for Reckless Beat. Getting tired of the rock-star easy groupie lays, Mitchell didn’t know it, but he was looking for more. Alana Shelton had grown up sheltered, on a retreat for battered women and this trip to a Reckless Beat charity concert with a friend is one of her first forays out into the real world.  He was on stage. She didn’t know the music, but felt an instant connection and lust for the guitar player.

She stood out like a beacon, her wide eyes and shy smile causing him to lose focus. He could tell she wasn’t a show-your-assets-to-get-a-backstage-pass kind of girl. In fact, he didn’t think she was a hardcore fan at all. There’d been no screaming, no flashing, and no panties flying at the stage when he smiled at her. Instead of the typical seductive glances he’d grown accustomed to, she gave him a glimpse of her gorgeous dimples and broke eye contact.

So when he snuck out in disguise to ask her to meet him, Alana wasn’t sure. She was even more unsure after the show when nobody came to get her to meet the band after the show. She wasn’t ready to go for it herself. What would a rock star want to do with her? Alana’s best friend encourages her to go after what she wants.

Kate breathed out a calming breath. “Mitchell Davies is a rock legend.” She raised her eyebrows. “He is sex on a stick. He makes my ovaries sigh. And you’ve stood here bitching like a fifth grader for the last twenty minutes. All this anxiety over a man any sensible woman would be inside dry humping right now.” Kate gave her a forced smile. “You’re going to go in there. You’re going to blow his mind, and you won’t be coming back out unless I say so.”

Mitch couldn’t stop thinking of her and was thrilled to find her at the hotel. Until an altercation ensued and Alana was hurt. Blinded. Bringing out all of Mitch’s protective instincts. She is a long way from home, and Mitchell decides to care for her in his hotel while she heals.

“You’re blind and in a predator’s bed. I’d stop tormenting the bear if I were you.”

Well, she did. And there was some good, hot sex, including a scene with another bandmate watching that was H-O-T.

I loved how unique Alana was. She didn’t play games. She was honest and upfront. I had one moment of confusion though. She said only 4 men had touched her. At all, and not just sexually. I had the impression she was a virgin and didn’t realize till way later that she wasn’t. I felt it wasn’t clear how far she had taken her last trip to the outside world.

I loved the interaction between all of the bandmates and Mitch’s reasons for not taking Alana as his immediately.

He squeezed her neck and rested his forehead against hers. “What is it with you, Allie? Why can’t I take my mind off you? I can’t take a single breath without wishing I was touching you.”

“Their kiss was lazy and deliberate, soft strokes of tongues, tender pressure of lips, and he mimicked the rhythm with each gentle thrust of his hips. With each slide, he gave his heart and soul to her, and his insides crumpled under the weight of love.”

Eden Summers has started a new rock star series that I am very eager to continue. It had just the right amount of emotion, humor and hot sex to keep my interest from the first page to the last, and enough insight into the other bandmates to make me eager to read their stories.