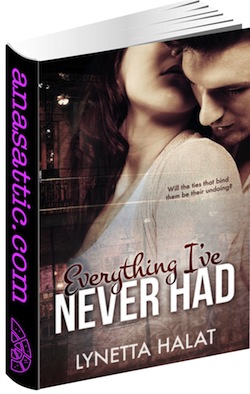 Everything I’ve Never Had by Lynetta Halat Review

With all of the books nowadays featuring 17-23 year olds, it is a true pleasure when one comes along that sweeps you away and features an older heroine. The beautifully written Everything I’ve Never Had by Lynetta Halat did just that.

Celeste is 38, a widow, and the mother of three boys. Part of a very powerful and dangerous family, Celeste’s marriage was arranged. She loved her late husband and the father of her kids, but she was never in love.

Since his death from cancer, her husband’s cousin, Adrian, soldier and the black sheep of the family, has been stepping in and helping out. He has become a father figure to the boys, and a best friend to Celeste. They both want more, but there are plenty of obstacles. Adrian and his father have been ostracized from the family, he is 30 – 8 years younger than Celeste, and neither one has shared their “more than family” feelings with each other. The rest of the family will do what ever they have to keep them apart, and they are both scared to go against them.

“I know I’m not supposed to want him. He’s my own slice of forbidden fruit–my deceased husband’s outcast cousin. And with the way our families were connected, that was not something I could ignore”

But when she sees him playing rhythm guitar in his band…her attraction becomes so strong she has to get away. But he follows, and they share an epic kiss that changes everything.

“That kiss…that kiss was exceptional, and I’ll never forget it. As I stand here and as long as I live, it was the best I’ve ever had, the best I could ever have.” ~Adrian

They still fight their attraction, and even date other people in front of each other while trying to keep their hands off of each other.

But they just can’t stay away…even when with the other dates.

“I’ve never wanted a woman the way I want you. Never.”
“It’s just because you can’t have me, Adrian. I’m nothing special.”
“Oh, baby, you have no idea.” He runs his nose up my throat, scenting me as he goes…”You’re everything to me.”

When they finally stop fighting each other, HOLY MOLY, it gets H-O-T. My kids play guitar and bass. I have picks all over my house. Let’s just say I’m getting all flushed when I see them now. 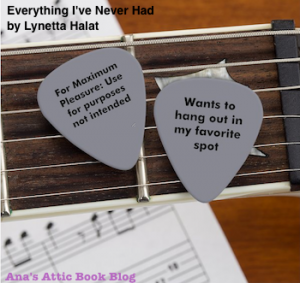 So much more happens, and I don’t want to give more away. There is a military aspect to this book that many will appreciate as well, and it was all handled very well. This book had a great ending, though it is different than what you expect, and a perfect epilogue.

Everything I’ve Never Had is a beautiful story with likable, relatable, and down to earth characters. It was a pleasure reading about an older heroine with kids for a change, and they only added to the love story inside. Though I usually don’t like to mention another author in a review, something about this story, (though the characters talk nothing like it) reminded be of a Kristen Ashley book, without the gobs of action. Perhaps it’s the older characters, the manly alpha, and the history between the couple. To me, this is the highest of compliments. Beautifully written and unique, I highly recommend you check this one out!

Purchase Everything I’ve Never Had by Lynetta Halat

Lynetta has graciously offered to give away a signed paperback of Everything I’ve Never Had. (US only)