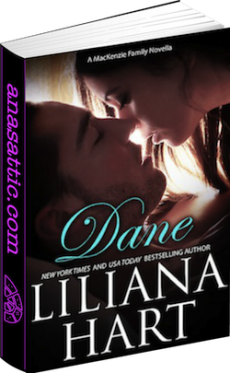 The MacKenzie Series by Liliana Hart has been on my radar a while. She has done some amazing giveaways both at Wicked Book GNO and here on the blog. I am so far behind on my TBR list that I just haven’t gotten to it. So the other night I just wanted a quick hot story before bed…(I knew my husband was ready and waiting…my brain wasn’t yet) so I grabbed Dane, a 57 page freebie and the first in the MacKenzie series by Liliana Hart. Liliana actually told me to read Cade first (the 6th in the series, and the first full-length book, plus it’s currently FREE), but I wanted a quicky.

After being away from the small town of Surrender Montana, Dane MacKenzie, who has been chasing stories around the world as a reporter, returns to his hometown. After the death of his mother, he couldn’t take it anymore, and left the town and his girlfriend Charlotte, and never looked back. When he returns, his rental car dies right outside of town, he walks to the closest auto shop, Charlie’s automotive. Guess who Charlie is? Charlotte, the girlfriend he left, but never got over. He has been comparing all women to her for 10 years, but thought she left town right after him.

“She’d never gotten over him. He’d destroyed every youthful dream of love she’d ever had”

His brothers never mentioned she was back, with an addition. She hates him for leaving, but does she really? Uuum no…considering she hasn’t had sex in 10 years and Dane is fuck-hot, she figures she might as well let him scratch her itch (he can come and scratch ming too!) right there in the office.

“I haven’t been able to get your taste out of my memory. So sweet. Like cream and something darker. Something forbidden.”

Then after their history, and not seeing each other in 10 years, they do it…no condom (jeez, that shit pisses me off!)

Then he meets up with his 3 brothers, all still in town, one is the town’s sheriff, one is the only doctor, and the other a PHD at a local college. Dane finds out some news about Charlotte that shocks him, but makes him love her even more. And he goes right back to her.

“I need to make love to you again. I need it like I need to breathe.”

“I’m going to love you all the ways I dreamed of over the last ten years,” he said. Get on the bed and close your eyes.”

Dane was well done for a novella. For a change, I actually thought that there was perhaps too much story trying to be packed into such a short erotic tale and it all wrapped up a bit too neatly with a nice little bow. But I still enjoyed the read a lot, and it ..ahem.. worked to get me in the mood a bit as well. I’m not sure if I’ll go ahead and download the next four novellas in the series, or just jump right to the full-length book, Cade (currently free), which Liliana says you can. I’d like to see what she can do with a full length book, because outside of the flowery vagina words, I really like Liliana’s style.