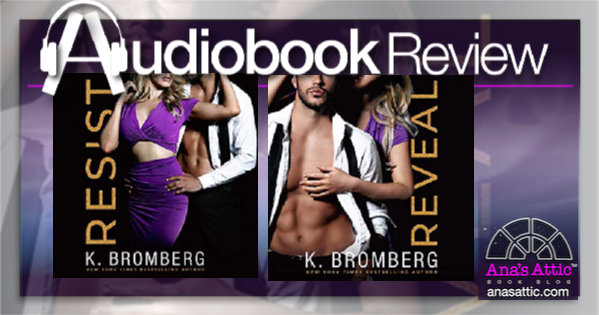 Resist and Reveal (The Wicked Ways Duet) by K. Bromberg

When I saw that K. Bromberg had a new book coming out and the Audio was in KU, I couldn’t grab it fast enough. I didn’t even read the blurb, I was just excited to start a new series from Ms. Bromberg. After spending 9 hours listening to Resist, I was NOT happy that it was a cliffy, so I went back to the blurb and saw that there was no way of knowing. I have the world’s worst memory, so I admit, I was annoyed at the end that I would have to spend another 9 hours of my life listening again or face that I already wasted 9 hours of my life because I will never know the end.

So, I spent another 9 hours and listened again before listening to Reveal but honestly, it was the narrators who really kept me into it. Erin Mallon is my favorite. So I listened to the 9 hour book AGAIN so I can go right into Reveal, but the narrator changed for Reveal!!! WTF??? It’s a DUET. If you listen straight to both it’s soooo hard to follow when the main characters change so much in the second book!

Vaughn, or “Vee” is living a double life. She has a family member to take care of and the bills are piling higher and higher, so she becomes a madam and starts her own escort service. She is smart and tough, but when she has to step in for the first time for one of her girls, she wasn’t impressed by Ryker Lockhart (though her body said otherwise).

“I’m not like most women, Mr. Lockhart. I’m not one to be impressed by a smooth-talking man or a large bank account.”
“Then what is it that would impress you?”
The unexpected.

When Ryker blackmails Vaughn, she has no choice but to be his escort, at his beck and call. But she doesn’t have to like it.

“She tastes of wine and resistance. A resistance not to the kiss but to me, and fuck if it doesn’t turn me on more.”

Their push and pull went on a little too long for my tastes. I just wanted to shake both of them at times. Ryker was such an asshole at first that I don’t blame her for being very wary, but it all went on just a bit too long, to the point that I began to get a little frustrated. When I saw I didn’t have much time left in the first book, I was so happy and excited that they would finally pull their heads out of their asses and be together by the end…UNTIL THE CLIFFHANGER HAPPENED.

“She’s like goddamn lightning—that’s what she is. She strikes without warning and is going to singe every damn part of me no matter what kind of shelter I try to hide under.”

Boy, Ryker changed so much in the second book. Not just just his voice (via the female narrator who changed), but he went from ruthless asshole to sweet teddy bear. As much as I didn’t like him in the first book, I loved him in the second. It was Vee who I started to dislike.

“A real boss knows she has to get her hands dirty when need be… and I’m all for dirty, Vee.”

Lack of communication and misunderstandings are so overused in romance, so I admit, I was a little surprised that Kristy used that. But the story still worked. They were worth the wait and I am glad I finished the duet.

“Sometimes it’s the ones you wait forever for who mean the most.” 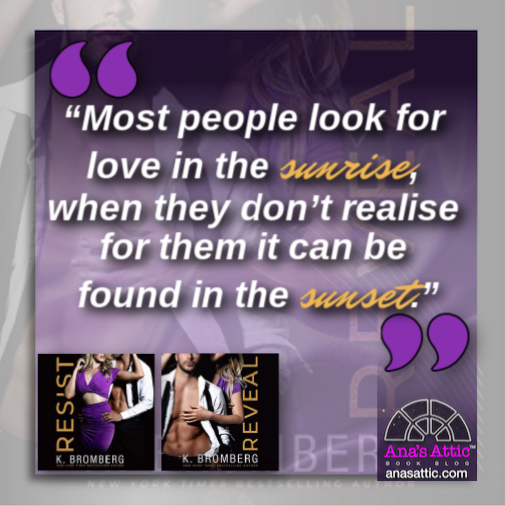 The narration in Resist was amazing, 5 stars. Erin’s version of Ryker was so sexy and Jason Clarke is always amazing. But Erin was not the female narrator in the second book so I had trouble shifting my brain to accept a different voice basically for both of them (even though the male Ryker stayed the same).

If Resist and Reveal by K. Bromberg was edited down to one book I would have loved it. I just thought the push and pull and the mystery all went on too long and it got tiring. It’s possible I feel that even more because I had to listen to Resist again before Reveal came out. But when you’ve waited for a second book, then spend another 9 hours re-listening, you at least hope for some continuity. To have a huge cliffhanger and then another narrator takes over was disappointing. Don’t get me wrong, K. Bromberg is a great writer, but the ruthless Ryker seemed soft and a little stupid in the second book and it was a huge change from the alphahole he started as, and I started to dislike the heroine a little in the second. Still, I enjoyed the duet enough to re-listen to the first and finish, but it’s not my favorite.

(Narration was good, but a narrator change in a duet really ruined it for me.)

At the time of this publishing, Both books and audiobooks are part of the Kindle Unlimited program. The audiobooks are also available for $1.99 Whispersync Price 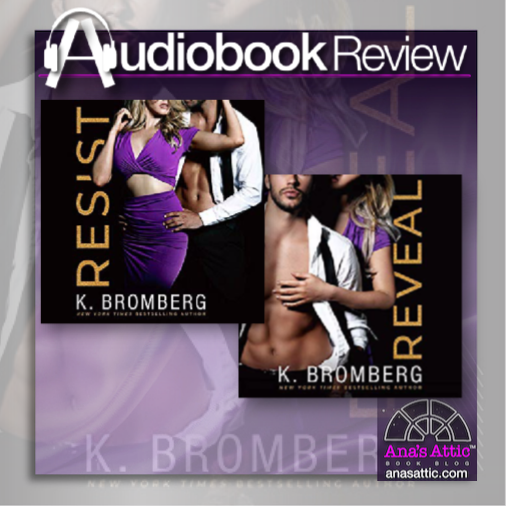