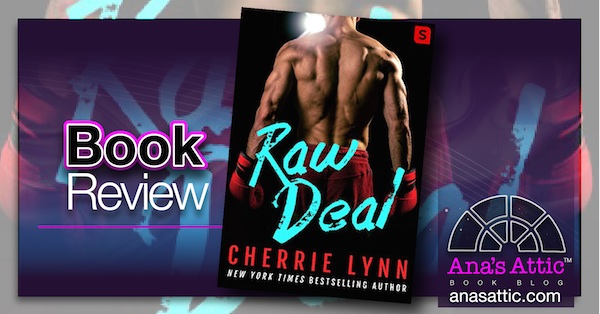 It’s been a few years since I picked up a Cherrie Lynn book, but I loved her Ross Siblings Series, so I was thrilled she was starting another brother series and couldn’t grab Raw Deal fast enough.

Raw Deal begins at Tommy’s funeral. He was an MMA fighter who was accidentally killed in a fight with Mike Larson. He left behind a grieving sister and wife. Mike is feeling guilty; he didn’t mean to kill, it was a freak accident that hit him just right, a risk they take as fighters. Mike never thought he hit him hard enough to kill, but a man is dead. He feels so guilty he goes to New Orleans to watch the funeral from afar. But when he sees Tommy’s widow and sister walk away to sit alone, he approaches to offer his condolences. While Rowan, Tommy’s wife, takes off, Savannah, his sister, stays to hear him out.

They meet to talk further, and Savannah finds it hard to hate the man the way her sister in law and family does. You can tell he’s a good man who is completely torn up about the part he played in her brother’s death. In fact. There is some kind of magnetic connection between them that was hard to deny. 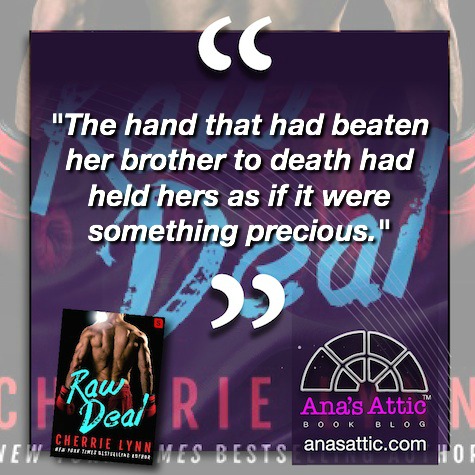 They develop a long distance friendship.

We have to take solace wherever we can find it, he’d said, and somehow, by some divine intervention or alignment of the stars or whatever the hell else determined their destinies…he was her solace.

But she can’t let her family know.

She didn’t know him, and no one would understand. But instead of letting go, she only squeezed his hand harder. The only anchor she had in this maelstrom of emotion was the hand that might very well have ended Tommy’s life.

The chemistry between the couple was HOT, and so was the sex. He was a total badass alpha with a sweet spot.

When we’re skin to skin, she thought, he’ll incinerate me. God help her, she wanted to burn. Burn until there was nothing left of her heart and mind but ashes, no room to think, no time to second-guess.

Mike hasn’t been able to fight since he killed Tommy. But it’s all he knows. He’s not sure he can get back in the ring again, and Savannah isn’t sure she can handle it if he does, so there is a ton of angst.

Her parents would be devastated to see her with the man who killed their son, but there is no denying Mike is a good guy.

I love the storyline for this book. It is certainly unique. I loved the beginning and I loved the end, but somewhere in the middle I kind of lost interest. It took me like 5 days to read it, and I read the book I picked up next in one sitting, so I don’t think it was a mood thing. But I can’t put my finger on why it didn’t keep my interest for a little while. I do think that the fact that it is 3rd person and not first contributed to that though.

I love that the next two brothers are a Rock Star and a poker player. You rarely get a single rock star book, you usually get a series about a band, so I love how Cherrie shakes things up in her series. But I do think that if the next series is about Tommy’s widow hooking up with the rock star whose brother killed her husband, it might really be pushing the forbidden, no? Hell, I need to read that.

I’m so glad to see Cherrie Lynn with a new series of brothers who are all totally different. I loved the very unique forbidden romance storyline. I am a first person girl, and the third person storytelling kept me from fully falling in love with this story, and may have contributed to the slow-down in the middle. But I still really thought it was a great storyline by a wonderful storyteller. I look forward to reading the next two in the series. 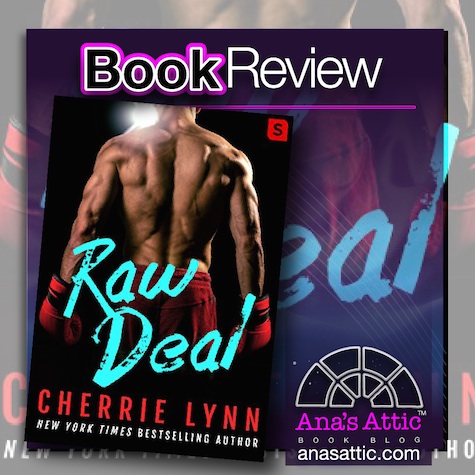