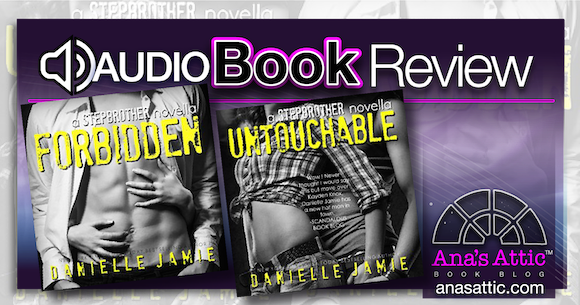 Forbidden and Untouchable by Danielle Jamie (The Stepbrother Series)

New Adult Novellas that do not stand alone.

Forbidden by Danielle Jamie is my first stepbrother book. The whole stepbrother theme seems so overdone that I never got interested. But I wanted to read Danielle Jamie. I have heard so many great things about her work that when I saw this series on audible, I jumped on it.

The first two, Forbidden and Untouchable, that I am reviewing here, are novellas, and they pretty much leave you hanging at the end, but not too bad. It leaves off in a good spot. The third book, Rapture, is a full length novel that I hear is amazing but a total tearjerker. It isn’t out in audio yet, so I have only heard the first two.

Raven is on Spring Break. All of her friends, including her boyfriend, went to Cabo, but her mom called her home, prompting her boyfriend to break up with her. Her mom has been dating Linc’s dad for a while, but Raven is really hoping her mom didn’t call her home to tell her they were moving in together. Because she really can’t stand Linc, despite how gorgeous he is.

So her mom, who made her come home, decides to tell her they are getting married, and then leaves to go away, leaving her to spend the week at home with Linc. Linc’s nickname is ‘Forbidden’ among her friends because you know she can’t go there, but a drunken bet is made, and well….one thing leads to another. Just once.

Turns out, Linc, despite his playboy ways, is a pretty good guy (except for one scene that really, really pissed me off). As much as Raven didn’t want to, she sees it too.

My feelings about Forbidden are kind of torn. The characters are very immature, even less than their ages. They are spoiled little rich kids and the parents are assholes for leaving them after making her come home. The female narrator was OK, but just OK. The inner monologue was annoying. But I also needed to know what happens, I was invested enough, so I grabbed book two immediately. (I was not aware this was a cliffhanger series 🙁  )

Untouchable is from Linc’s POV, and begins 3 months later. The couple have not seen or spoken to each other in 3 months. Unfortunately for me, the narrator really ruined this for me. While he had a decent voice, he couldn’t read. He pronounced words wrong, accentuated the wrong parts of sentences, and read parts as if there were periods instead of commas.

But I liked this story a little more. I liked the emotional connection that developed.

But quite honestly, the fact that Linc was mad for three months over a silly thing kind of pissed me off, because I thought what he did was WAY FUCKING worse and honestly pretty unforgivable, but there was no denying the spark between the two.

They were there for the wedding. It was official. And they fought the feelings that neither could deny. But it was a losing battle.

“I’m going to fuck you bare. My first and my last fuck without any barriers. I need to feel you baby, all of you as you come on my cock…I may not be able to have you after tonight, but you and I will both remember this night, and remember giving ourselves fully to one another.”

There was plenty of heat in this one, but it was also pretty heartbreaking that they couldn’t be together.

“Sometimes loving each other isn’t enough”

This is a hard one for me to judge. First of all, it’s nearly impossible to separate the story from the narration, and the narration was just…not good, especially Untouchable. I can see Danielle is a good story teller, but the characters felt very young, snooty and immature to me. However, I was compelled to listen despite the narrator, and even though I didn’t love the characters, I really want to see them together. I have heard amazing things about Rapture, the third book in the series, and if it was available on audio when I finished Untouchable, I would have immediately downloaded it despite the narrators. For me though, I don’t switch from audio to reading mid series, and I’m not sure I will still be interested by the time Rapture is out on audio.
I will definitely read more from this author, hopefully about slightly older characters, or at least more mature.
Bottom line: If you like New Adult Stepbrother books, I think you will enjoy this very much, but skip the audio and read it. 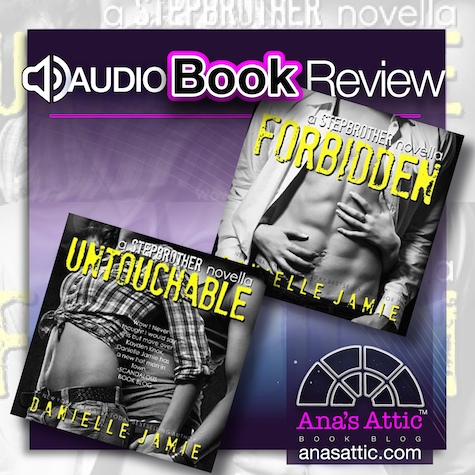