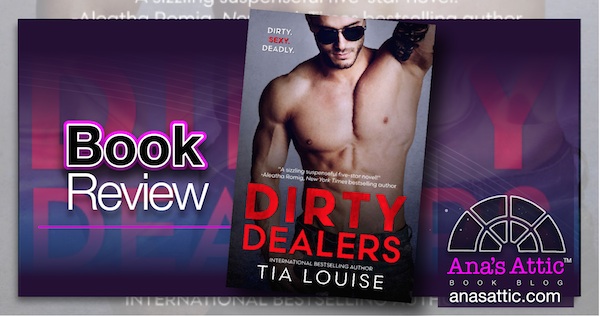 3rd in a Series. Can Stand Alone.

Dirty Dealers by Tia Louise is marketed as a standalone spin-off to the Dirty Players series. While the main story stands alone, I wholeheartedly think you need to read the Dirty Players duet first for full enjoyment of the story. Even though I read the first two, I was still a bit lost at the beginning, so I can imagine that a newbie could be really lost. But once you get past the beginning, hang on, you are in for a ride!

Logan is one of the royal bodyguards. After falling for the Prince’s wife Zelda, he needs a break from guarding them so he won’t have to see their love all the time, so he is reassigned back home to Monagasco to guard the Queen Regent, Zelda’s sister, Ava. Blix, the villain from the first two books, is still at large, and there is word that his threat is front and center again, so Logan really needs to be on guard.

Cassandra met Logan when she was 19 and he was 24. They had a summer of love before he went off to the armed services and she had to go back to raising her little brother on her own. Cassandra is a fighter, that’s for sure. She is a tough chick drawn into a horrible world of crime and drugs; but she has no choice. It’s either her or her little brother, and she would do ANYTHING to protect him. Now she is being forced to take advantage of the man she once (and still) loved. From the minute they reconnect, Logan is hooked.

“He said I was the strong one, a survivor, but he has no idea all I’ve had to do to survive since I saw him last.”

Cassandra is so strong, she has an issue (I don’t want to give it away) that would make many people completely helpless, but for her, it was barely a blip. She only wished she could get out of the crime world she is forced into.

“Good people don’t do what I’ve done. When life turns to shit, good people rise up and make noble choices. They don’t make deals with the devil and put their loved ones in danger”

Cass showed up in Logan’s life at the perfect time. He needed to connect with someone and needed love in his life. And she was “the one” who got away.

“Fate just threw me a lifeline, and there’s no way in hell I’ll lose it this time.”

“I’ll have you in my bed, and no matter what it takes, I won’t lose you again.”

But Cass is working for the enemy, and things can get pretty dicey. As with the first two books, there is no shortage of danger, violence, intrigue and suspense. I was on the edge of my seat during portions of the story. Tia Louise knows how to craft a suspenseful tale that is very unique.

“The boy I fell in love with has turned into the man I can’t live without.”

But that still didn’t stop me from really enjoying the book. It reminded me why I love to read romantic suspense. It was so exciting and unputdownable! 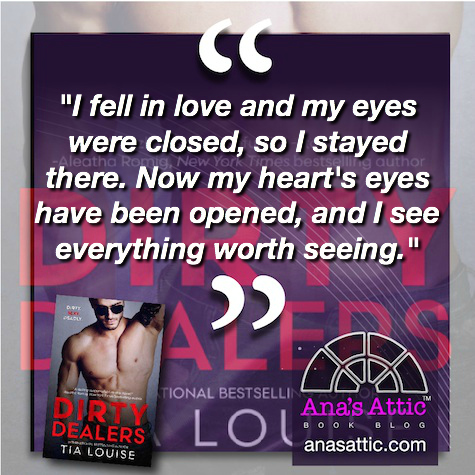 Dirty Dealers is the third book in the Dirty Players series. It’s marketed as a standalone, and while the romance does stand alone, so many previous characters and situations come into play that I think it would be way better if you read the fist two in the series first. As it was, I was a little lost in the beginning, and it took me a bit to get into. But once I did, yowza, I couldn’t put it down! There was so much action, drama, intrigue and suspense, I stayed up all night reading. Between the secrets and lies, the love and the sex, double crossing and criminals, Dirty Players is a series that never stops! If you like romantic suspense that isn’t really dark (but it is gritty), I highly recommend this series. 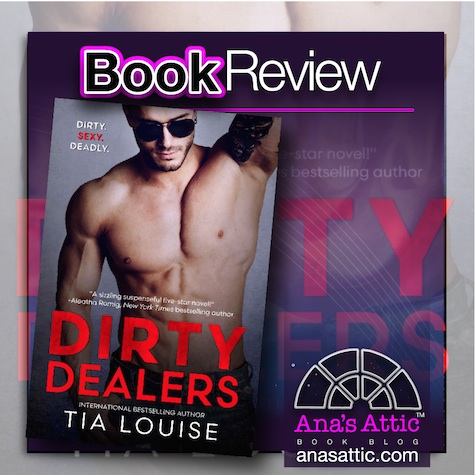