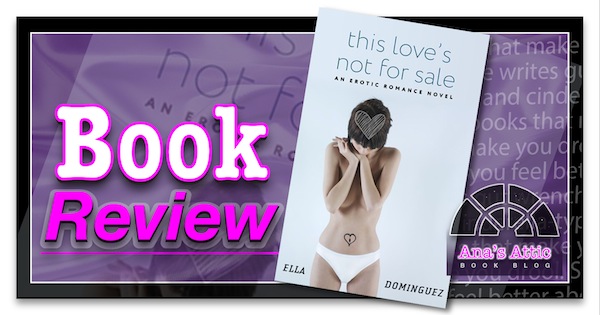 This is a hard review for me to write, so you may want to take what I say on this one with a grain of salt because I reviewed an ARC. I was in a strange situation when reading This Love’s Not for Sale by Ella Dominguez. I was supposed to be the first stop on the blog tour on release day. But 5 days before, I still hadn’t received my copy. When I finally did, it was an uncorrected proof. VERY uncorrected. I mean…so uncorrected that it looked like it wasn’t even read over once by the author let alone any beta readers. We were warned…but I have never received an ARC in this rough of a state. There were errors in almost every important moment from the dedication to the very last page.

Despite all of the errors, I powered through and after being more than 2/3 done, I received the first half after editing. I was not going to re-read, especially because since I just wasn’t loving it. After I had finished and had most of my review written, I was offered the final version. I downloaded…checked to see if most errors were corrected, and most were. But the story itself, and many of the issues I had remained the same.

“Tucker took a slow and deliberate step towards her and narrowed his eyes, barely able to contain the impulse to pull her over to him, shove his tongue down her throat to shut her smart-ass mouth up, and then spank the living daylights out of her. Gritting his teeth, Trucker (yes, his name was spelled wrong) tried to withhold his overwhelming frustration and arousal.”

Tucker is a cocky asshole wanna-be Dom realtor who wants 112 acres of land in Bridgeport CT. Lilliana has just lost her Aunt who she was very close to and this is her family land which means the world to her. Lilliana was divorced from an even bigger dick (which is maybe why she liked Tucker) but she is feisty and tough.

I kind of liked Lilliana. Though she was a strange combination of crude and prude, she was spirited and gutsy. That is, until she submitted to an asshole. I just couldn’t find much I liked about Tucker and was never able to reconcile Lilliana’s feisty personality with the one who let herself be leashed and called ‘Pet’. She honestly was just way too much of a ball-buster to be that submissive to a guy who didn’t deserve it.

“I wan’t to make this work with you, so I’m going to make my rules very simple. I command. You obey. Always. Am I clear?”-Tucker

In fact to me, she was the Domme in the relationship. Maybe not the bedroom, but in every other way.

“I swear to Christ, if you ever tell me I’m dismissed, I’ll put my foot up your dominant, alpha-male ass. I swear it.”-Lilliana’s best line, one I wish she stuck with.

There was enough about the book that I liked to power through the 100+ errors in my advanced copy. But it was a struggle. I laughed and smiled at parts, I even teared up a little. But most often I was wondering how anyone could send a book out to bloggers that felt this rushed. It built up and began to get pretty good at one point. Then to me, it fell completely apart. The end was very rushed and the characters seemed to act very out of character.

Maybe it’s unfair that I’m reviewing this version. But it is the version that was sent to bloggers, and even uploaded to Amazon originally. My problem here is WHY? As an indie author Ella could have released a week later and given the editor more than 3 days. She could have had beta readers fix a few things that really would have helped. But it felt rushed and sloppy, even after errors were fixed.

Rating: 3 stars (if all corrections are made) 4 heat

Ella and I have gotten friendly and even saw naked women together (see more here). So this is a hard review for me to write. It may be unfair because I was given such a rough draft, but I spent 4 days reading it and highlighted all 100+ errors, took extensive notes and had a hole in my schedule to fill. I don’t mind uncorrected proofs in most cases. But they usually have at least been proofed by the authors and a beta reader or two. This felt like she typed The End and hit send.

This Love’s Not For Sale by Ella Dominguez seems to be getting some really good reviews, and I honestly tried to review as if there weren’t errors, but I can’t be sure I wasn’t affected by all of the mistakes. What I do know is that I never felt the connection between the couple. They were so hot and cold, and I just never bought that Lilliana would wear a leash and like it.

Purchase This Love’s Not For Sale by Ella Dominguez