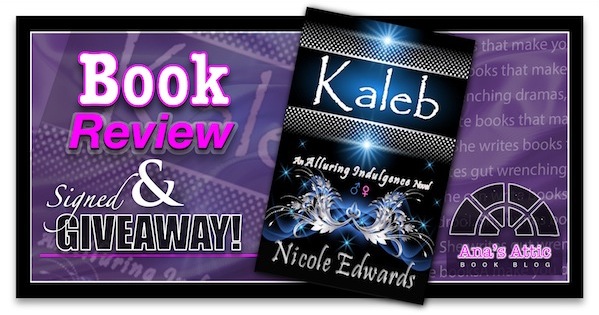 You guys were right! Whew! I needed a really hot read, something a little extra. Kaleb fit the bill. And when I say extra, that includes an extra guy! Can you say menage? I can (but usually it’s while I’m moaning).

I had already received Kaleb when people mentioned that I may want to read the Club Destiny books first because Alluring Indulgence is a spin-off. It isn’t necessary at all, but I did notice that there were characters in Kaleb that it felt like maybe I should have known, and I think I would have enjoyed it more if I did read The Club Destiny books first, so I am moving to that series now.

I was all over my guy. So Nicole, Mr. Ana thanks you (plus, he likes the menage idea).

Kaleb is one of 7 totally hot brothers (each will get their own story) who are all working together to build a private resort in Texas. He has been friends with Zoey since childhood, but they have always fantasized about each other. After Zoey got divorced from her cheating ex, she came to live with her dad, who lives on the property bordering the Walker’s, land they would like to use for their resort. So when the sparks fly between Kaleb and Zoey, she doesn’t know if it is for her land, or for her. But there was no doubt about it, it was Zoey he wanted.

“It felt as though Kaleb had been waiting his entire life for this moment. For the chance to feel her, to touch, taste, explore every glorious inch of Zoey’s sweet smelling skin.”

“Would you let us fuck you Zoey? Both of us? Right now?”

I definitely can’t read too many of Nicole Edwards books in a row. Already my vagina is about to go on strike from the amount of action it’s seen this week! I also didn’t find myself so into the book that I had to know what was going to happen. I kind of wanted to just save it for bedtime, which was fine with me.

I’ll tell you this, when I’m in need of a little libido boost, Nicole Edward’s books will be my go-to books.

(Club Destiny is the first series, Alluring indulgence is a spin off series, but you don’t need to read Club Destiny first)