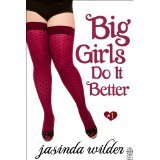 I grabbed Big Girls Do It Better by Jasinda Wilder when it was a Kindle freebie. It is currently 99 cents and book 2, Big Girls Do it Wetter, is free (9/24/12). I was a little nervous, I have never read a book specifically geared towards a ‘big girl’, but I saw rock star, it had a cute cover, so I grabbed it! I opened it up, and the first line made me want to read more, because I can TOTALLY relate.

“Two things get me in trouble: food, and my mouth.”

Anna (nice name, too bad it’s spelled wrong!) is a DJ and singer in a local club who walks into restaurant after her shift for a snack, and runs into a GORGEOUS rock star, Chase, who only seems to have eyes for her. She doesn’t get it though. Why her? He could have anyone!

So begins some pretty hot sex, a little bondage, and Chase wanting more of a relationship. But Anna can’t give up her hangups and insecurity to let him get close.

This wasn’t so much about her size, as it was about her lack of confidence because of it. Which is something I was totally able to relate to. This wasn’t one of those books about the bigger girls who love being that way. And this wasn’t about a hugely fat person. This was about the average/a little above average woman, a size 18.

I had a few issues with this story. Anna’s demeanor and her thoughts totally clashed. A woman with her lack of confidence does not dress in sparkles, leopard, fishnets and miniskirts. Even DJs. They often will not get up and sing in front of crowds either. Her mannerisms as well, pointed to a more confident woman. Also, while I ‘got’ her insecurity, I felt it was harped on a little too much.

This story was only around 30 pages, and was hot. It was nice being able to relate to not wanting to be on top, and not having references to being tossed around like a feather. But in 30 pages, you can’t expect much. I will read the next because it is free for now, and promises some character growth and more hot sex!

Rating: 3.25 stars 4.5 for heat.
Recommended for a quick hot read before bed. Since this is currently 99 cents and the next is free, it’s a good deal.
.
Purchase Big Girls Do It Better at Amazon
.
See the Big Girls Do It Series Reading Order Here
.