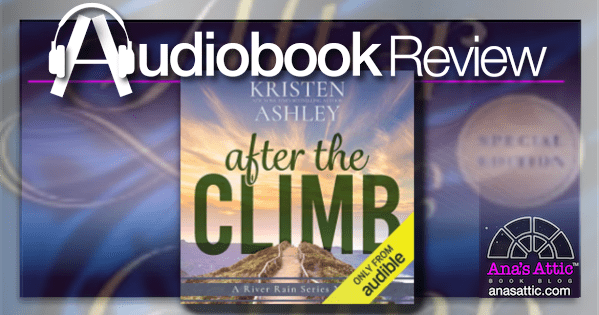 After the Climb (River Rain #0.5) by Kristen Ashley

Adult Contemporary. Start of a new series. Can stand alone.

Kristen Ashley wrote After the Climb at the beginning of COVID with the help of the “chicklets” in her reader group. I read it then, but with all that was going on in the world at that time, I wasn’t 100% there for it, you know? I was having a really hard time focusing on books at all, and even my proven slump-buster Kristen Ashley didn’t quite break through.

I didn’t review it, because I knew I really needed a re-read. My head just wasn’t there. I was about to re-read it when Kristen decided to revamp the book and add much more to it, so I grabbed the NEW version of the audiobook this time and I was sucked right in.

My favorite thing about After the Climb is that the characters are in their 50s! I love when Kristen writes older characters.

“Now he was fifty-four and no less glorious. Silver in his hair. Also his beard. Lines on his forehead, around his eyes. And maybe part of that heft he had was some weight in his middle, because Duncan was always active, but he loved his food. And oh, how much I would have treasured being beside him along the way to see him become the man who stood before me.”

Imogen Swan and Duncan were childhood sweethearts and the love of each other’s lives. Imogen (“Genny”), Duncan, and their best friend Corey were the three musketeers until, at 24, Duncan was informed that Imogen had cheated on him. Despite her pleas of innocence, Duncan never believed her, and they split up. Both went on to live their lives, get married, have kids and get divorced. Genny became a famous actress. Duncan (AKA Bowie) opened up a chain of outdoor stores.

28 years later, Duncan finds out the truth—that Imogen never cheated on him. And when they see each other again, sparks fly like they always did. But this time they both have kids who help push them together.

I have to say, I had mixed feelings about this book. It’s Kristen Ashley, my favorite author, so I loved so much about it, but I just wasn’t all-in. I usually love Kristen’s lengthy descriptions, but this book seemed to have more than usual, and that’s saying a lot. I’m not really into designer stuff, so those descriptions got to be a little over-the-top snobby. The descriptions of Duncan’s 6,000 square foot “cabin” were even too much for me, and I am an HGTV addict. It was clear that Kristen just binged on Yellowstone and loved it.

Even still, I loved the characters, I loved their families (though Chloe and her french got on my nerves), and I still was sucked into the whole romance and family dynamic. It just felt like not a lot really happened. This is more of a set-up for the River Rain series that features their individual kids.

I really enjoyed having the different voices, but the narrator, Lizbeth Gwynn, who did Imogen made her a little harder to like. She came off way snobbier when I listened vs. when I read. She also did the Honey Series and I had a hard time there too, she is just a little formal for me. BUT, her voice worked for a wealthy, older actress. I like that Kristen used an ensemble cast and look forward to listening to the rest of these actors in the series.

I love Kristen Ashley. She is my favorite author, and I especially love when she writes older characters. That being said, this wasn’t my favorite of her books. It felt a little more like a long prequel (which it kind of is). There was as much, if not more time spent on the side characters than the actual couple themselves. The descriptions, which are usually one of my favorite things about Kit’s writing, went on and on and on and I zoned out on many of them, and all the characters are so overly rich that they just weren’t very relatable. Still, it had a lot of the KA magic that I love. It still kept me interested despite having read it 6 months earlier, and it has me excited for Chasing Serenity, the next in the series.

Purchase After the Climb by Kristen Ashley 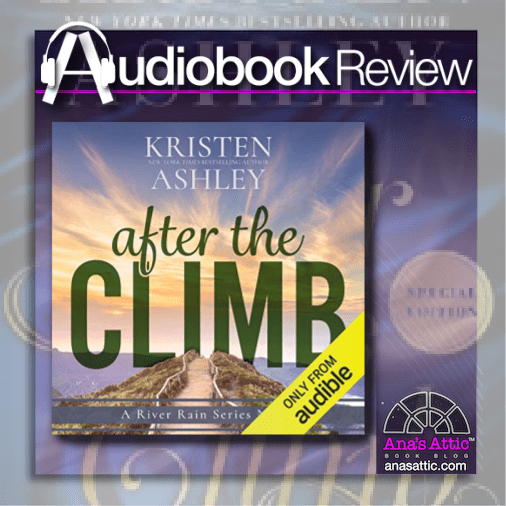