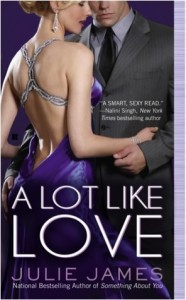 I really enjoyed A Lot Like Love by Julie James. 4.25 for story 3.5 for heat. Short description: Jordan is an heiress to a billion dollar fortune and owns a wine store. Her brother, Kyle, is in jail for hacking into Twitter and shutting it down after his girlfriend broke up with him on twitter. Jordan is invited to an annual wine party at Xander’s home. Xander is laundering money for the Martino crime family, and the FBI needs proof. So in order to get her brother released from jail, Jordan agrees to bring an FBI agent undercover as her date.Nick McCall, FBI agent, does not get attached. He can’t, since he works undercover so often. Nick and Jordan begin with sarcastic and snarky banter. They don’t seem to like each other much. But as they are forced to work together, the connection grows. Eventually, they get past the snarkiness and move towards a relationship, or is it all for the cover?Like the first book in the series, there was a lot of smart, snarky, witty characters. There was some good action and adventure. I learned a lot about wine. Nick was a hard ass, gruff, scruffy, sexy guy with a great “Don’t f*ck with me” face, Jordan was smart, sophisticated and down to earth at the same time, loyal and funny. I loved Nick’s Brooklyn Italian mom, and Jordan’s brother was great. There were a few short but hot sex scenes including one that included wine. I also liked how contemporary it was with twitter and iphones. I sometimes find that lacking in today’s books.
My favorite line:
Something inside Nick snapped.
That was his fake girlfriend in there. Sitting at the table where they had just shared cheese fries the night before. And if she thought he could throw scorching hot-sex- looks to any pansy-ass scarf-boy who wandered into her shop, she had another thing coming. He had a look of his own to show the douchebag. It was time to break out the don’t-fuck-with-me face.

I really enjoy this series, Jack and Cameron from Something About You (FBI/US Attorney 1) made some appearances, but it was not necessary to read the first to read this. I look forward to reading the third in the series, About That Night, very soon.