The last day of the trip is upon us. Since it was after 4 again when we finally finished ass raping Scandal, I thought for sure I could sleep a little later on a Sunday. But as soon as the hair dryers started, I was up at 8. At this point zombie doesn’t begin to describe me….3 hours Thursday plus 4 hour drive, 3.5 hours Friday and 3.5 hours Saturday, plus more alcohol then I’ve ever consumed. Still, I was having fun. Then Tara and Buffy, got up and we started playing. 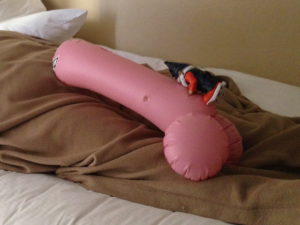 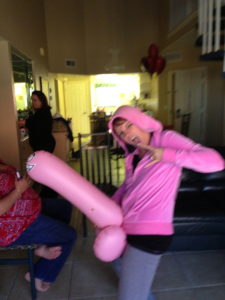 Then Tara decided she wanted a Willy for her own. 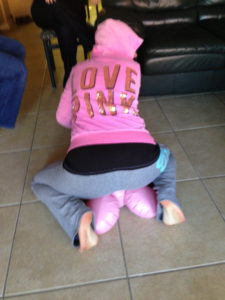 Then we were in such a daze we started facebooking eachother from the same room.

Tara posted to my REAL facebook, and my 15 year old responds…..this is why I have an alias! But we were laughing so hard from this, It must be repeated. My kid’s brain is corrupted forever! (Don’t worry, he can handle it, he is a very mature 15 year old) 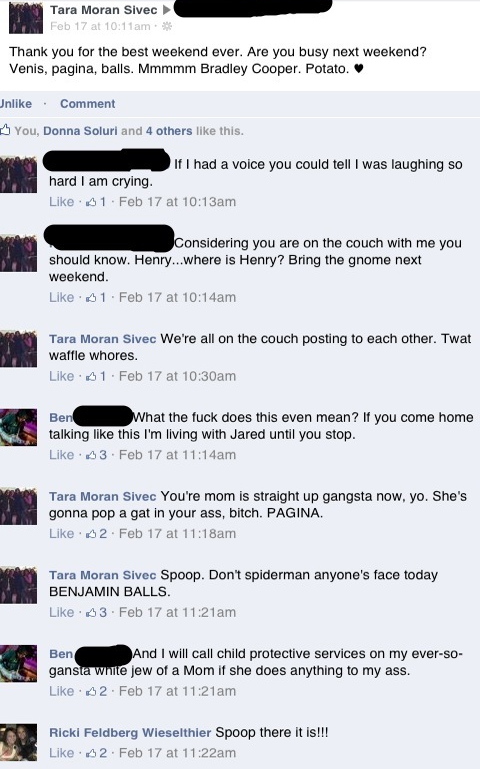 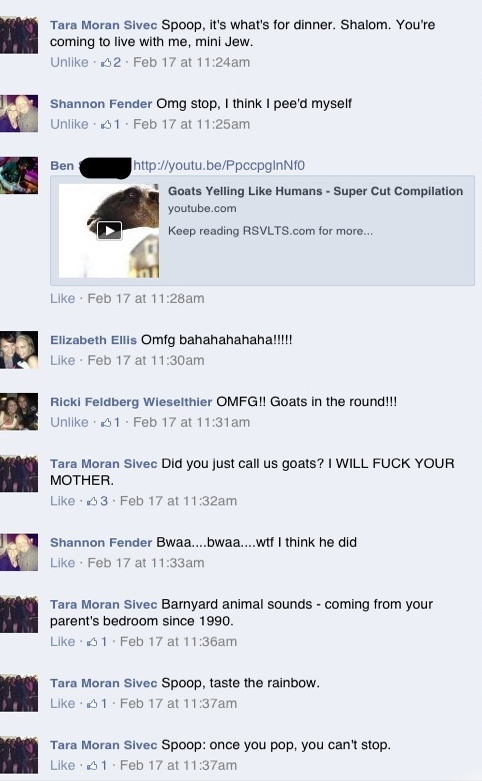 Now, keep in mind, there were like 7 or 8 of us, hung over, in our PJs on the couch, and we all get the video at a slightly different time. Each one of us hits play:

So we basically had “Goats in the round”! And the facebook corruption continues…. 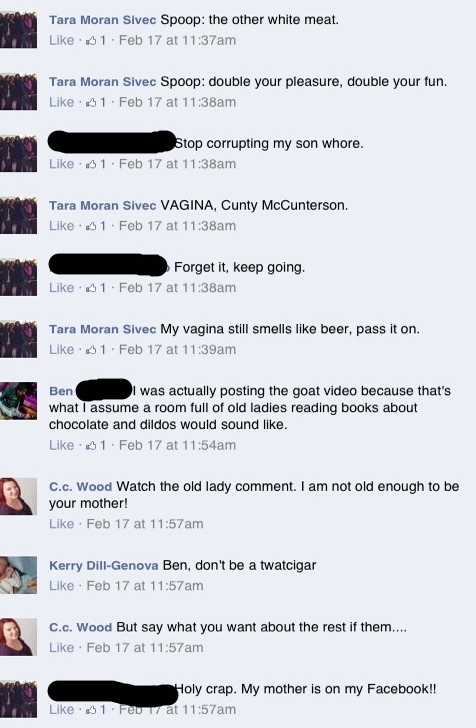 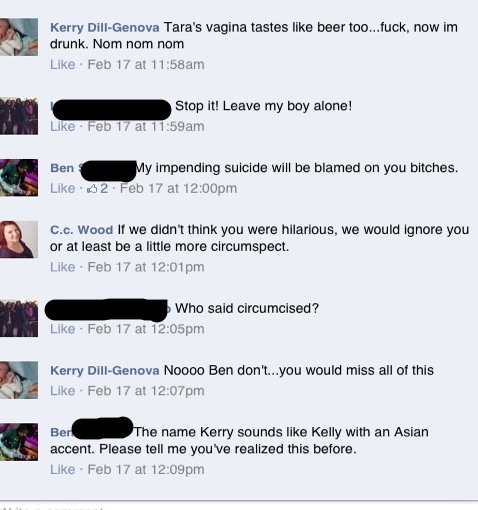 Then Deseree and Trinity stop by to hang out and even more goofiness ensues:

When a day starts out with goats in the round and bouncing booby runningman, it can only get better. As we read through the previous evening’s tweets and laughed, we realized we had to get ready to go to Citiwalk for Tara’s tattoo and Ricki’s piercing. The place insisted you come the night before to make an appointment, so when I told Tara that I wanted to get her strawberry from her book on my ass, I was joking…kind of. But the idea did grow on me.

Hungover, exhausted, and maybe still a little wasted, I had my ass altered a bit as a weekend souvenir…unfortunately, my husband hates strawberries, and the chocolate might have been a little wrong to put on my ass, so I didn’t officially put Tara on my ass, but while Scandal facetimed my husband, my ass was forever altered. My cherry has been popped. 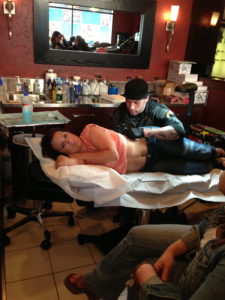 Tara getting an amazing tattoo from Mr. Cutie 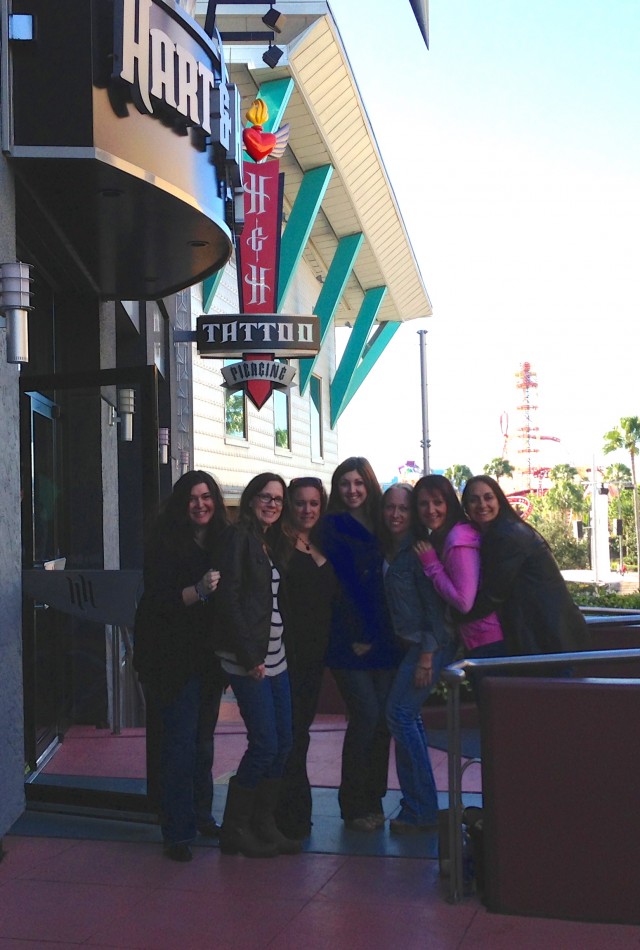 All of us in front of the tattoo place

After Citiwalk, I had to bring Scandal to the airport. As I headed back to the hotel, Carlos, the gate guard, sees my car and stands in the drive airhumping and blowing kisses. What is funny when your car is filled with crazy girls, is a little creepy when you are alone, let me just say, the deadbolt was on that night.

Then we had to say goodbye to Buffy….without her, it just won’t be the same <sniff sniff> 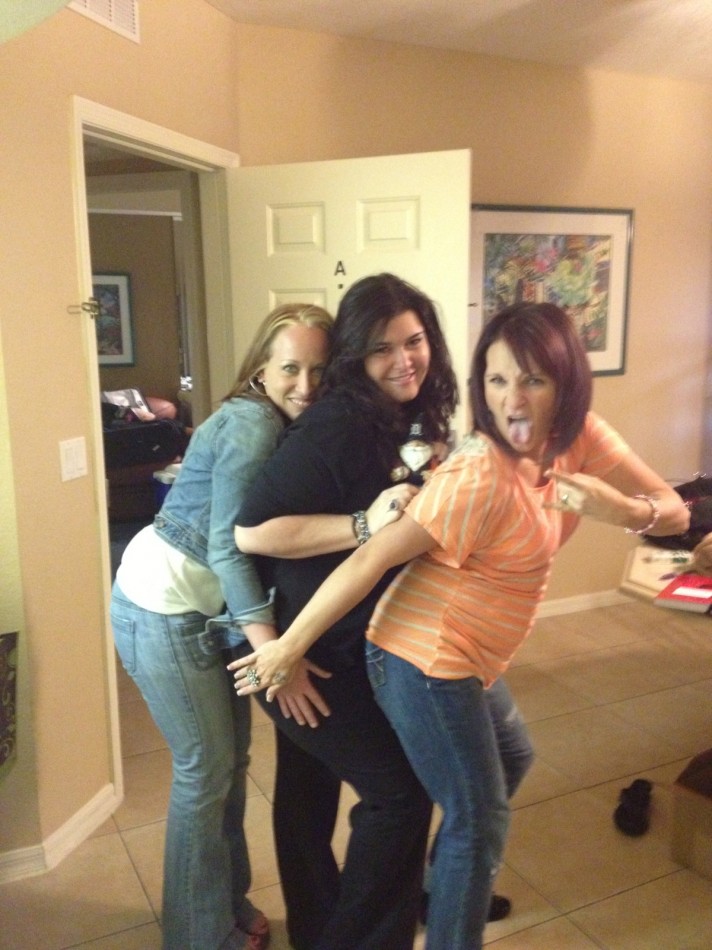 Then we head over to the melting pot for dinner. First of all, this time I was nuts enough to get in Shannon’s truck–that chick is SCARY on the road. Then we meet the wonderful Kimberly who gave me a lovely gift. You have no idea the tweets that can be overheard at the melting pot. And when Jasinda Wilder and her funny husband joined us, we got a little crazy…the restaurant around us cleared out quickly.

First I had to show everyone my ass, then Kimberly marches around the restaurant, through the kitchens with goats SCREAMING out of her ass, then the tweets start flowing:

“I’ve got snot in my throat right now. Well it’s better than vagina!”

“I don’t know where my cream is”

“If you’re dipping in our pot, you’re going to have to put a condom on”

“Oh melting Pot, you are going to regret letting us in”

“Maybe warm cheese going down your throat will help you”

“Are you wearing Depends?”

“She just gets so excited she starts licking it”

“He fizzes when he cubs. Pop pop, fizz fizz, oh what a relief it is”

“When I swallow, I’m thinking, this shouldn’t be chunky”

“I licked your rim”

“You can just screw it right in”

“I found a sheep doing a man”

“You just stick it in. I put my dark on top of yours. I like my meat raw”

“Two minutes for anything that walks on land”

“The fondue ate my beef”

“The second I get my dessert, you can say balls and vagina all you want”

“You need to be practicing on popsicle sticks”

“I think I just came”

“Totally love it when my husband double dips”

“Dick on a stick. With nuts or without?”

“We can do it against the wall”

“You don’t need a big man, you just need the right man” 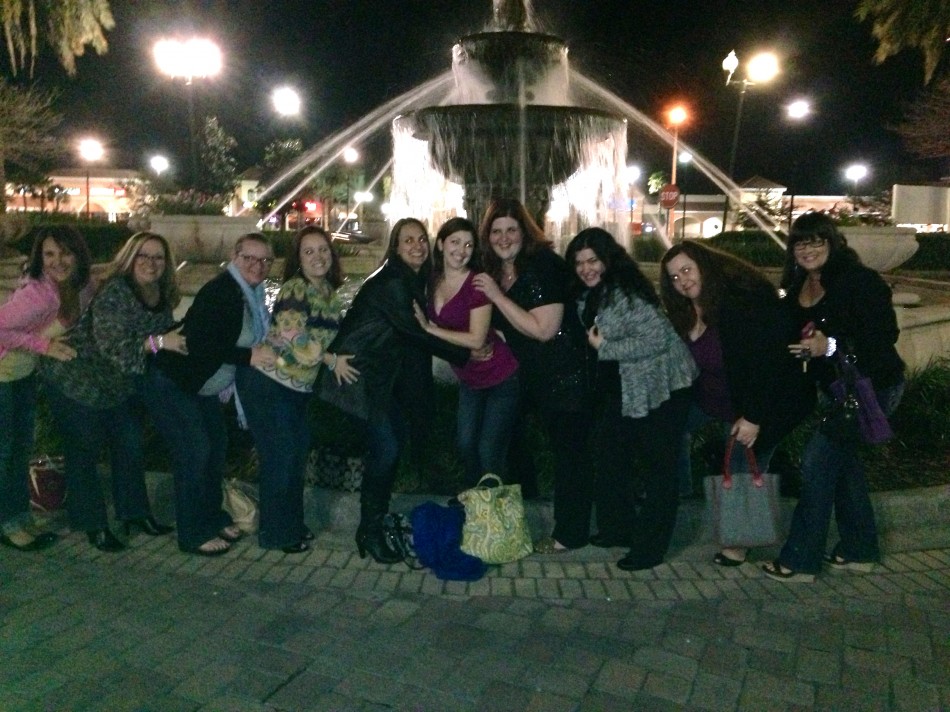 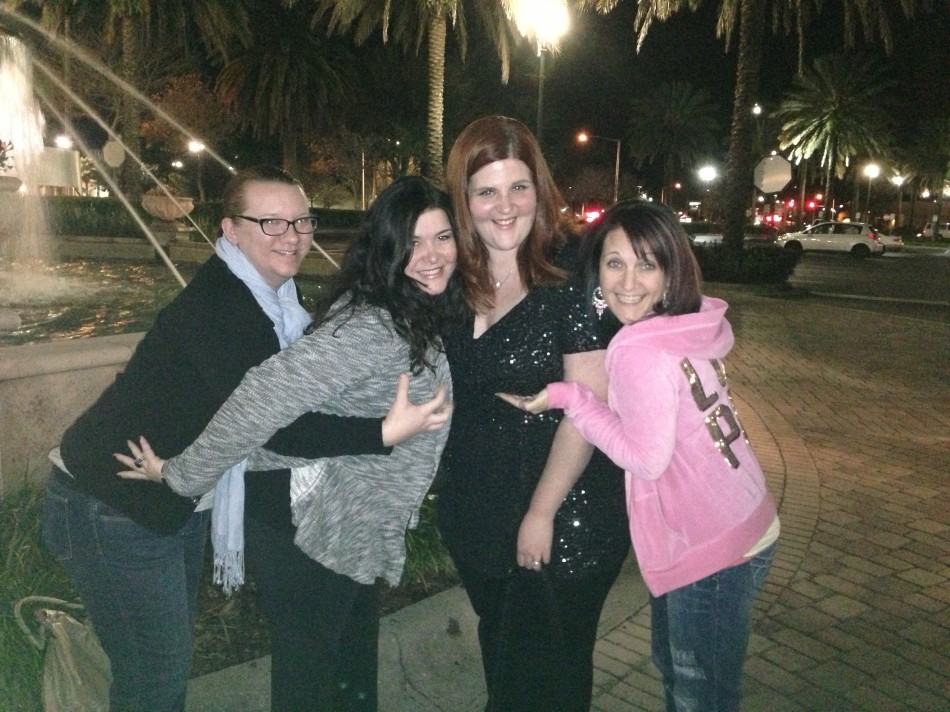 Once we made it back to the room, Shannon was topless on the table or something like that, and we realized we need one last photo of the group….But while we waited, Tara decided to make her own collage of the weekend: 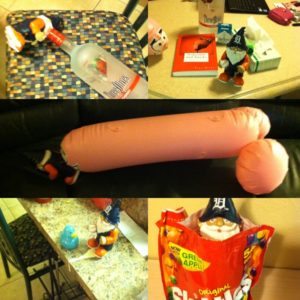 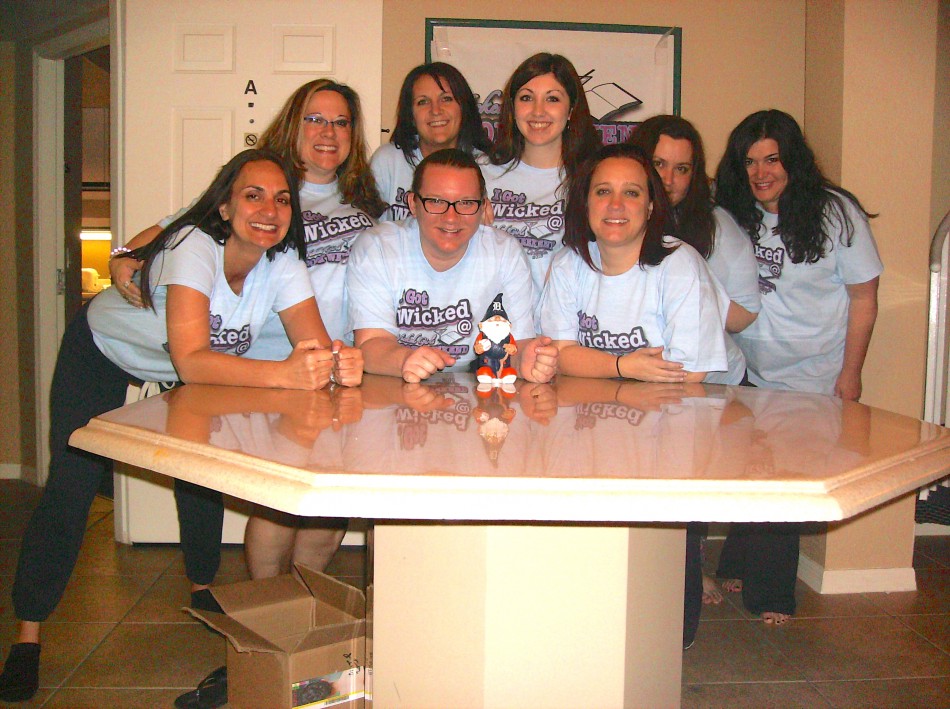 Tara took Willy home in her Smut Carrier…we were so hoping she would have to take it out at security. 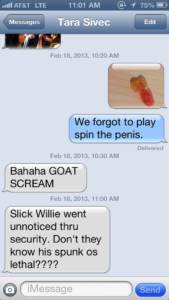 And that’s how the weekend ended…..till June!