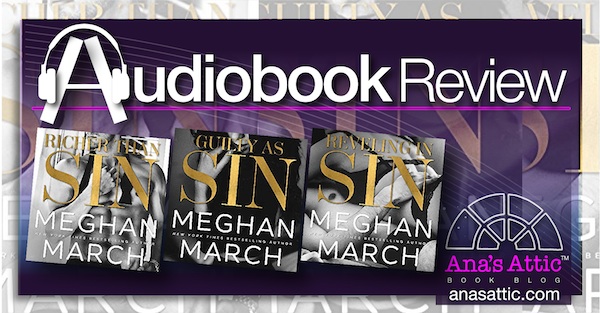 The Sin Trilogy by Meghan March: Richer Than Sin, Guilty as Sin, Reveling in Sin

It’s been a while since I read a Meghan March book, but every time I do, I wonder why I don’t read more of her books. The Sin Trilogy was SO ADDICTING. I just HAD to know what would happen in this sizzling, angsty rollercoaster ride. Because telling you about the story can ruin it, I am giving a general review of the entire trilogy since they are all out now. Be advised, you will need to read all three because once you start, you won’t stop. 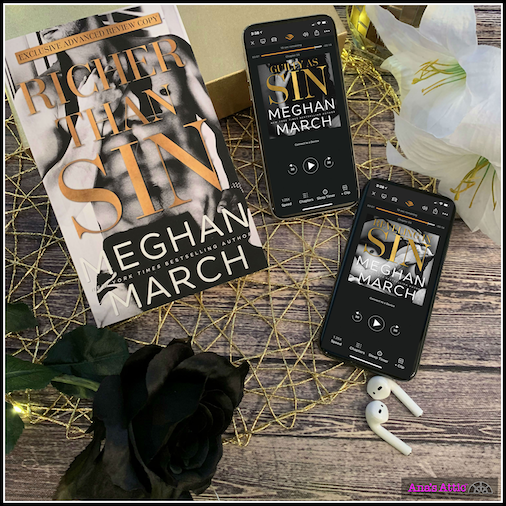 “A Riscoff and a Gable can never live happily ever after. Our family feud is the stuff of legends.”

The Sin Series is kind of a guilty pleasure type book. It’s like Dallas and Dynasty – angsty AF and filled with twists and turns and drama. This is a second chance romance meets Romeo and Juliet. Told in alternating points of view, both in present and past, I must admit, there is a lot of time jumping and it’s probably a little harder to follow in audio, but I still never felt lost for long.

The Riscoff and Gable families have been enemies for generations. The Riscoffs basically own the entire town of Gable, while the Gables are now broke. It seems that the way the Riscoffs went about that started the feud years and years before our hero and heroine were born, but the feud still rages on.

Lincoln Riscoff is back in town and is expected to produce an heir to the family fortune. It’s the last place he wants to be until he sets his eyes on a beautiful woman in a local bar. Whitney Gable has broken up with her cheating boyfriend and is drowning her sorrows. When she sees a gorgeous stranger, they hook up for one night of passion, not knowing that they are supposed to be sworn enemies.

“Kissing Lincoln Riscoff was like finding salvation when you’d thought all was lost. It didn’t feel like kissing the enemy.”

These two were perfect for each other, but family drama and secrets will keep them apart.

“I’m looking at the only thing I want, and you’re telling me it’s impossible because of our last names. I don’t buy that. I will never buy that. Just give me a goddamned chance. That’s all you have to do.”

Ten years later, when Whitney comes back to town after the end of her marriage, Lincoln is determined to get her back and not lose her again, but there are so many twists to keep them apart, this couple goes against all odds.

“Listen up Blue. You’re back in my town. You can hear me. You can see me. You can pretend I’m not here all you want, but I am…. And there’s one thing you should know. We aren’t fucking done”.

While this type of action-packed book was just what I needed at the time, I do think that perhaps all the drama and twists may have overshadowed the relationship a bit, but it still kept me on the edge of my seat the whole time. 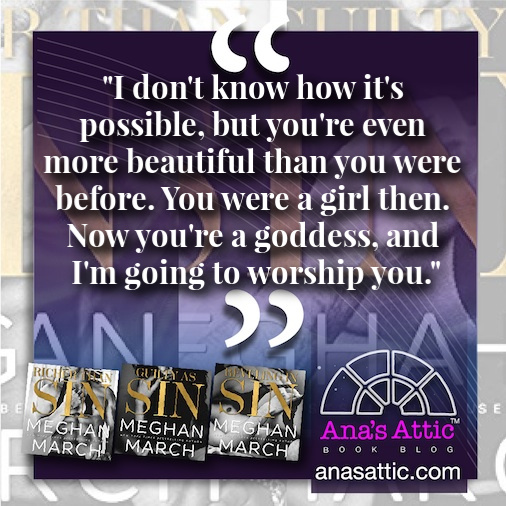 Joe Arden embodied Lincoln perfectly, and Erin Mallon is always a favorite. They each had perfect voices for the characters they played and I think the audio made the story better for the most part except for the visual cues of moving from past to present.

Wow. The Sin Trilogy by Meghan March was a hell of a ride! It’s angsty, has over-the-top family drama, lies, secrets, scandals, drama, and so many twists and turns it was impossible to stop listening. It had a bit of a soap opera feel with an epic family feud, but it made for an intriguing and unique read. Expect to be glued to the pages (or headphones) for this trilogy, because you won’t want to miss a word. 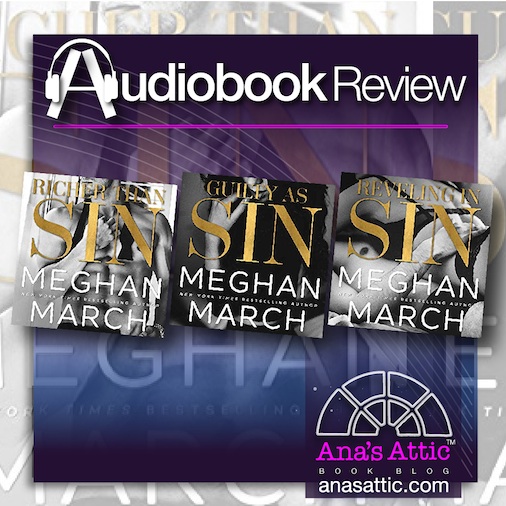