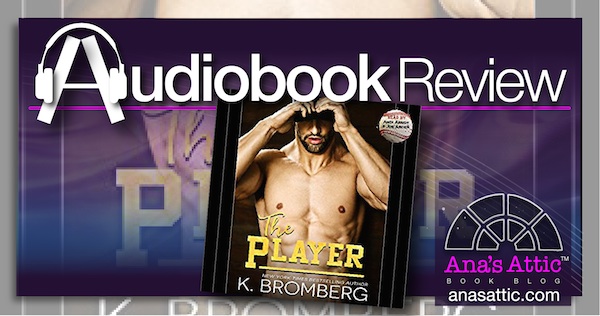 The Player by K. Bromberg

Sports Romance. 1st in a duet.

I have fallen so far behind on my audiobooks, I read this weeks ago, and I am just reviewing it now. I would have forgotten most books by now, but The Player by K. Bromberg somehow hit all my memory banks right, because I remember it like I just finished, a true testament to the author’s talent. Another testament is the fact that I don’t tend to gravitate towards sports romances, yet I loved this one, and it made me want to go to a game like I used to with my dad when I was a kid.

Easton Wylder is a baseball superstar. Playing on the same team his dad was famous for, he is living out the dream he worked his whole life for, until a shoulder injury benches him. The team hires the best physical therapist in the business, Doc Dalton, but it’s not Doc who shows up, it’s his gorgeous daughter, Scout, who is determined to prove she is just was good as her dad, despite being a young woman.

“Because there are women who are good for a quick fuck. There are women you would fuck, but are better in the friend zone. And then there are women like Scout. They make you wonder, make you crave them, and drive you absolutely fucking crazy because you want them when you shouldn’t. They’re an enigma. Confusing, alluring, tempting, and fucking perfection.”

Easton and Scout try hard not to mix business with pleasure. After all, Scout has never had a problem putting her hands all over other players, but Easton is completely different. She can’t not be affected by him, the chemistry is too strong.

“Right now, I’m going to kiss you senseless, Scout, and I want to fucking enjoy it. So, for the love of God, woman, use those lips of yours on me and not on words.”

Easton was so perfect, possibly even too perfect, there is no way to resist this guy. He isn’t even the player you’d think he is based on the book title. He’s just an all-around good guy.

“He’s good with kids. And with dogs. And with his sick mom. And with spooked women. Is there anything this man can do to make me not like him?
Because I’m beginning to think he might need to do that, so I don’t start believing he hung the moon. Or stole my heart.”

One of my favorite quotes relates to him knowing when he found something good:

“I’ve played on grass my whole life, Scout. There’s no need for me to see what’s out there when it’s green beneath my feet.”

The thing I really loved about this book is how much their dads (and moms) played into who they are. Both of their dads cast a really, really big shadow, and they both struggle to emerge from under it as their own person, but being the child of a legend and pursuing the same career makes that a little harder, especially for a woman in a man’s world.

There was some amazing banter and some really funny lines that kept me entertained and smiling. 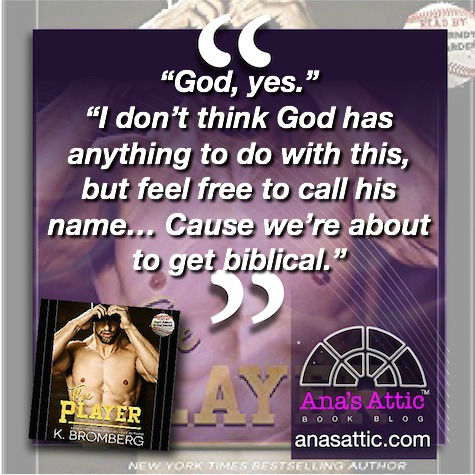 But there was also some beautiful emotion, and I have a feeling part two is going to be super emotional.

I have some major issues remembering books. And while I remember the majority of the story, I had to re-listen to the end to refresh myself on the cliffy. There is no way I’ll remember it by July, and will probably have to relisten again before the second comes out.

I love both narrators but sadly I think Andi Arndt is getting over-used, so I found myself mixing her up with recent characters she has played at first.

Despite not usually being a sports romance fan, The Player by K. Bromberg sucked me in and didn’t let me go until the cliffhanger ending. I do wish I knew it didn’t stand alone, because with my crappy memory, I now have to add a slot in June to re-read this to refresh my memory. Easton is pretty much the perfect guy, there is no way you can’t fall in love with this GOOD guy. And Scout wants so much to help make her father’s wishes come true, I just want to reach in the book and help her. Being a woman in a man’s world, she has to work extra hard to prove herself, and I think it’s so realistic how long she resisted the pull between them. I do need to know what happens and how they get to their HEA, so I will be grabbing The Catch when it releases on June 29th.

Purchase The Player by K. Bromberg 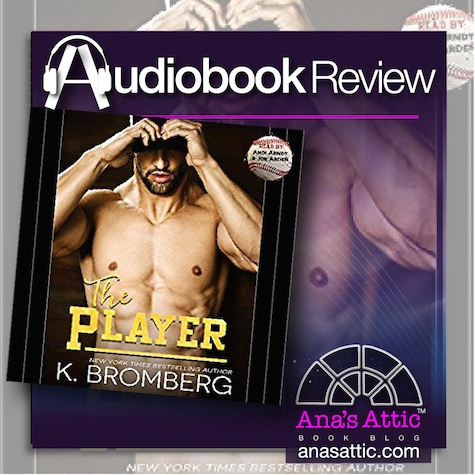