Last year, I read a book (Friends with Benefits) from a brand spankin’ new author, CC Wood. She was so new, I added her book to Goodreads after I fell in love with it. After a while we became friendlier. Then I read Seduction and Snacks by Tara Sivec, and decided I was going to meet her or die trying (see my review). After Scandal from Scandalicious Book Reviews and I worked together on an interview with Tara, we bonded, and then CC, Ricki, Kerry, Scandal and I began messaging each other every day. At that point, I brought up the idea of a professional author/reader shmoozefest event in February. It was early October, but not really enough time to get an event together, and I had no clue how to get an event planner for a place 3 hours away from me. So the girls convinced me to go lower key for this year, and make it a gathering so we could hang out with our favorite authors.

I had an obsession with finding a resort with a 4 bedroom condo so we could all stay together. Ricki lives there and found Westgate Lakes Resort. It may be stuck in the 80s, but we were able to be together. Then we all asked a few more of our favorite authors, and it spiraled from there. I had never been to a signing, I had no clue what to do, but had to step up and plan. Ricki’s husband knew of Houlihans, so she sent me the info and we worked on the menu and price thinking it would be about 35-40 people. The snowball rolled. As more people signed on, I had to sign a contract for a hotel group rate, then I, (actually, my amazing husband) made t-shirts, custom swag bags, signing books and more. The snowball started getting big now (I said ball) The last few months have been all about me arranging with authors, readers, restaurants, printers, hotels and more. Fielding about 50-100 e-mails a day, this got huge!

Finally, it was Valentines Day, and I was driving the 3.5 hours the next day to pick up Tara Sivec and CC Wood at the airport. I was running around till 3am, and still had to give my husband some VD nookie…..3 hours later, I was packing up the car for O-town. Starting the weekend with this crowd completely exhausted was crazy. So I got to the airport with 15 minutes to spare before CC arrived. When I saw this while waiting, I knew it was a sign of things to come. 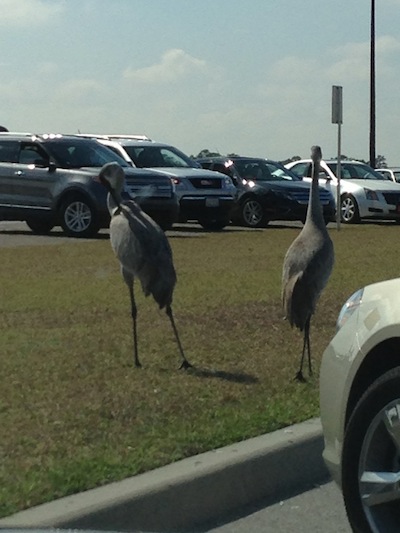 These things were 4 feet tall!

So I grabbed CC, and circled around a few more time with CC, too chicken to hold up my carefully crafted “Slutbag McFuckstick” airport sign for Tara. The second Tara squeezed into my car with her “Bag of Smut”, hilarity ensued, and we were laughing so much we missed “that bitch LaTurna’s” navigation commands. When we finally found the hotel, guard man Carlos was waiting. Bald and buff, we couldn’t help but offer to show him Tara’s Vagina. Let’s just say Carlos liked us the rest of the trip…A LOT, if his air humping and kiss blowing were any indication. As we arrived in the condo, we are greeted by Shannon and 5 trays of chocolate penises. 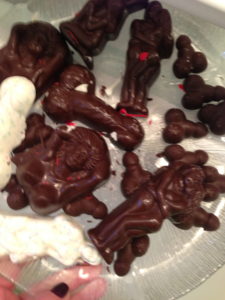 I guess she took “wicked” seriously! The bar was filled with every alcohol possible and we were already ready to party. Then Ricki shows up with Scandal from Scandalicious book Reviews (I gotta say, I have texted with Scandal and Ricki daily for months, but had no fucking clue who they were for a minute when they walked in). They had driven in with Raine Miller and Katie Ashley (I’m so jealous, I wanted to pick up everyone so I could have them in my car…and never wash my seats again (seriously)). Then Buffy (Tara’s BFF and Liz from the books) shows up…and the shit goes downhill from there. Let me tell you…these two together were like the Chocolate Lovers books on crack. I have to tell you, I was nervous they would go off and do their own thing and not want to hang with us, but I was wrong, they were so fucking awesome and down to earth I wanted to hump them both, and they would totally hump me right back (and they did, a LOT). 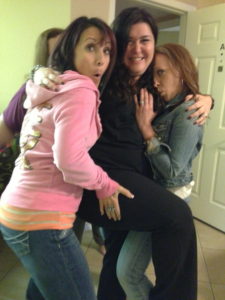 A few authors stopped by with swag right when we got there. Katie Ashley, Raine Miller and Sarah Ross. I’ve never met any of them, and they were so normal! (I was totally intimidated though). I was nervous about Sarah the most. She is a YA writer who I haven’t read yet. She seems so sweet and innocent, I was afraid we would corrupt her forever, but she ended up being totally cool. Katie is totally Emma…sweet and squeaky clean with a great sense of humor. And Raine…I love that woman, she’s only a couple of years older than me, but seems so wise and mature, you just want to soak up all of her knowledge.

Next, we get to the dinner (late) at the Smokehouse and there is a bar full of people. I have a big mouth, but I’m weirdly shy one on one, so I forced myself to introduce myself to everyone. Especially the amazing Kimberly Flynn Sutherland , who gave me an awesome Fifty Shades of Grey bracelet. By this time I was so exhausted (remember 3 hours sleep and 4 hours driving) I couldn’t sit down and chat with the authors I was dying to meet, I had to meet everyone else too. I only remembered to take 2 photos. 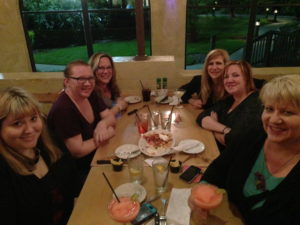 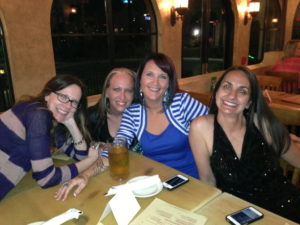 There were like 8 more tables but I was too busy to snap photos. After dinner, everyone came back to our room to stuff swag bags. This was a nightmare. 100 swag bags that don’t stand are not easy to fill. And they spread…..everywhere. We had the beautiful RK Lilley on our couch, and “don’t be a dick” Abbie was an RK hog, but we love her anyway. Though swag was everywhere, we all drank, a lot, and Tara began the running man. (Click below to see)

and then we watched Pitch Perfect and sang along in our PJs. 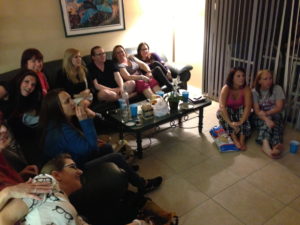 RK Lilley, CC Wood, Tara and Elizabeth plus loads of fans, drunk and singing along to Pitch Perfect.

We also fought to have RK pose for the cover of In Flight. (She is so totally Bianca. Gorgeous, quiet, did I say gorgeous? She is soft spoken, but makes you want to listen. Unfortunately all the girls in the room were so friggin loud I couldn’t hear much) 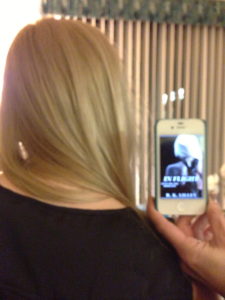 RK stayed in our room till like after 2! How cool is that? (And she stayed perfectly gorgeous the whole time). As far as Red Wings go….RK has the right attitude–there is no way she is giving up great sex for 5-7 days of the month.

My roommate (in a very strange room with a bathtub and shower RIGHT IN THE MIDDLE) was Scandal. Now–I just need to give you a little background. Scandal’s ass is EXIT ONLY. She has made it clear on numerous occasions. We have been threatening her for months to change that. She was scared she was going to be ass raped in her sleep, and she had to share a bed with me….mwahahahaha…..but I left her alone (for the first night) and we gushed about all the authors we met until after 4. (Sleep? Nah, who needs it?)

This concludes Day One Recap. I have 6 gifts of swag to send out to six winners. There will be three posts all together, so two winners per post.

Buffy spidermanned me often, to win swag, you need to comment your take on what being “spidermanned” is. If you learned it this weekend, you are not eligible to win, so don’t give it away! 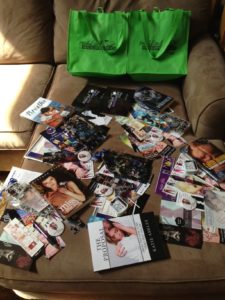