I love weirdos. Seriously, some of my favorite all time books have the weirdest, quirkiest characters. Sex Says made me certain — I’m a weirdo lover. Because I can’t even tell you how much I friggin loved the complete crazy that was Sex Says by Max Monroe.

Have you ever had one of those laughing fits that you just can’t stop and every time you think about it you start the giggles? Well I’m laughing right now as I pull this quote, but I’ll talk about it more later.

“I want to stab someone!” Henry shouted.
“Gotta get that approved by the president first, buddy.”

Shit, I have the giggles and can’t stop again!

Reed Luca is a 31 year old free spirit. He is a people-observer. He is a compulsive liar (just for fun and getting reactions). He is one of those eccentric geniuses. He flits from one job to another looking for insight on people, on the human condition….looking for new experiences and chances to meet with (and mindfuck) as many people as possible.

“God, this man lived his life so differently than most. Reed Luca was the guy who made his own rules without apology and never let social expectations veer his direction in life. He lived for himself— not for anyone else.”

Lola Sexton is a 13 year old in a gorgeous 32 year old body. She is fun and quirky. She rides her bike, “Daisy” to work or roller-skates, complete with two braids. She writes a popular love and dating advice column called “Sex Says.”

One day Reed happens to pick up the paper and read her column. And he thinks it’s a total crock. So he decides to get on YouTube and make a video rebuttal. With his gorgeous face and intelligent observations, his video immediately goes viral.

“As much as I wanted to tell this guy to choke on his own penis, I had to take the high road. And then, when I got to chat with him in person, I could tell him off with that whole penis-choking scenario.”

Lola wants to meet with him to tell him off, but when Reed sees her, he knows she is his unicorn. She is another rare person like himself, that doesn’t do what society expects, she lives by her own rules, just like him. But to her, Reed is trying to ruin her life with his video against her.

“I had never really hated anyone in my life, but I really, really hated Reed Luca. With a fiery passion that made me better understand those women on that show Snapped—the one where they go off the deep end and kill their boyfriends or husbands.”

Reed’s video was so well received, that a competing newspaper hires him to write a column just to refute what Lola says in hers. “Sex Says” vs. “Reed This”.

To: Lola Sexton From: Reed Luca Subject: Friends Sorry, LoLo, but I refute your assertion that we aren’t friends. We’re the best of, and it’s only going to get better. After all, I need to know you better than anyone, right? How else am I going to write all of my columns?
—
“I refused to resort to homicide. It was too fucking messy, and there was no way in hell I’d mess up my manicure and fresh coat of pink shellac for Reed Luca. I was a bit eccentric, but I wasn’t insane.”

Reed loved to get Lola all fired up. So he couldn’t help but find her address to deliver his first column to her before it was printed.

Do not look down. Do not look at his crotch, Lola…
“Are you staring at my dick?”
Goddammit, Lola.

Moving my gaze up from his crotch—it admittedly moved a little slowly—I finally settled my focus into the face of none other than my archnemesis. Reed Luca, looking fresh as a fucking daisy and smirking like the devil himself.

Reed was so much fun, and together, the 2 quirky characters enjoying humanity together were perfect.

“Lola Sexton was fun, and even better news, she thought I was too—she just didn’t realize it yet. She was antagonistic and opinionated and completely off her rocker. And now, I had her right where I wanted her.”

But Lola still wouldn’t admit she didn’t hate his guts.

I wasn’t a multiple-orgasm type of girl. Hell, before this, I often questioned if anyone was really a multiple-orgasm type of girl. I’d started to wonder if multiple orgasms were a myth—and I made a living writing a goddamn sex column. But apparently, they had their place, high in the sky like the unicorns of the sex world. And I had proof, as I was currently sitting on that majestical fucker’s back and riding it straight over the rainbow toward the pot of gold. Any second, leprechauns were probably going to start tap-dancing around my living room.
—
“Just because a man took you to Pound Town and let you ride a unicorn and find the leprechaun’s pot of gold didn’t mean you had to like him.”

Honestly though, there was no way not to like the guy. He was crazy and funny and charming and immature as hell, just like Lola.

“Somewhere along the way, hate had morphed into dislike and then reincarnated itself into lust, and then, like had blossomed. I liked Reed. Probably too much. But I couldn’t help it. That intriguing bastard was too much fun. Infuriating bullshit columns aside, I couldn’t not like him.”

Reed knew right from the start.

“I’d known from the beginning—she stood out. And something about her called to me. My unicorn.”

I literally have about 50 more amazing quotes ready to go, and it just broke my heart to hit delete. So you have to grab this yourself and see what you are missing, but be prepared to giggle. 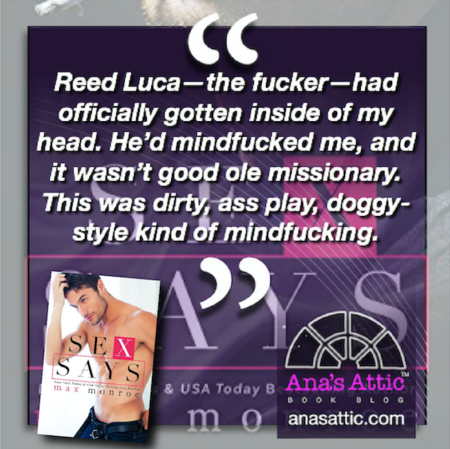 I have only read the very first Max Monroe book (twice, once regular and once on audio) and I absolutely loved it, they just wrote them so fast I never had time to keep up and read them all, so I am so glad they finally wrote a new standalone I was able to grab. I absolutely LOVE their “little world of weird and eccentric” in Sex Says; it’s quirky, silly, sexy, fun and oh-so-smart. Part of me wishes there was a way to make a series from it, but this couple is one-of-a-kind and they should totally stand alone. If you are looking to laugh your ass off at two intelligent, immature adults who like to experience all that life offers, Sex Says is a great story for you. I was a bit wary in the beginning, but Sex Says stood out enough to me that I know it will end up on my Best of 2017 list.

PS: I wish I knew who Max & Monroe was because I want to read their backlists!

Normally, I needed a face-to-face encounter to read a person’s intentions, but something about what I knew about Lola from her column and the careful way she’d arranged her words when emailing me spoke to violence I wasn’t sure I’d ever witnessed.

Limb amputation, genital mutilation, and a healthy hock in order to leave a loogie behind on the tattered body.

Would meeting up with the woman behind the words lead to anything other than some kind of police involvement? Though, really, I kind of miss them…

No, no. I was supposed to be reformed.

But even the converted could find themselves in trouble when they least expected it. An impulsive video on YouTube that led to millions of views was proof of that. My inbox was now cluttered with interview requests from various media sources, as well as hate mail from angered Sex Says fans who didn’t appreciate my candid view regarding their favorite dating and relationship column.

I stared at the blinking cursor on the screen where I’d opened a return email and volleyed.

Goddamn, I couldn’t help myself.

Fuck it. I’ll cut both of them.

Check out the SEX SAYS PLAYLIST.