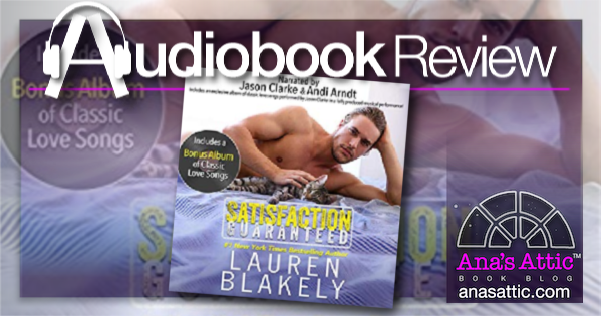 *Charity Alert: Please see the end of this review for details

Lauren Blakely is an automatic one-click author for me for good reason, and it all started with her Male POV books in the Big Rock Series. Satisfaction Guaranteed brings us back into the Big Rock World with another funny, sexy male POV novel, and the first in a new standalone series called Always Satisfied. We got a sneak peek of the story in the novella Delayed Satisfaction and the end of The Dating Proposal on audiobook.

Though Satisfaction Guaranteed fills you in on what happened, I think having listened to the prequel increased my enjoyment of it. Delayed Satisfaction takes place 7 years ago when Sloane and Malone met eachother (Yes, those rhyming names are so cute!). Malone is a vet, and his “party trick” is that he can sing old classics like a star, and Sloane was immediately crazy about the crooning vet. But right as their relationship was about to get to the next level, he realized that Sloane was his new boss’s daughter, and they ended things.

7 years later, in Satisfaction Guaranteed, Malone still works for Sloane’s dad, and her animal rescue is about to be brought into the vet practice her father owns and Malone runs. Thrown together again, the attraction and chemistry was all still there. Neither ever got the other out of their system in 7 years. So they decide to try to get it out now. You know how that always goes!

“I’m doing it again.
I’m flirting with her.
Caught up in the vortex of Sloane Elizabeth. She’s a hurricane of sexuality, a storm of lust and desire, and I want to be caught in the eye.”

This book is also told entirely from Malone’s point of view, but we get “notes to self” from Sloane which is Lauren’s clever way of giving us Sloan’s thoughts.

“I can’t take it anymore. Just get me naked and do bad things to me.”

While the beginning didn’t quite grab me as quickly as Lauren’s books usually do, I have been super distracted lately so that may have played a part. Still, Lauren’s smart banter, relationship equality and sexy times always win me over. And though I have listened to a good share of Jason Clarke books, he was hella sexy in this one. And that boy can SING!

“You can’t be this good-looking, this smart, this caring, this charming, and this talented too,” she says softly.

It was really cool that the songs weren’t just at the end of the book like I expected, but they were integrated into the narration as well. I hate when they have to read lyrics in an audiobook instead of sing them, so this made it a little extra special as only Lauren Blakely can do. 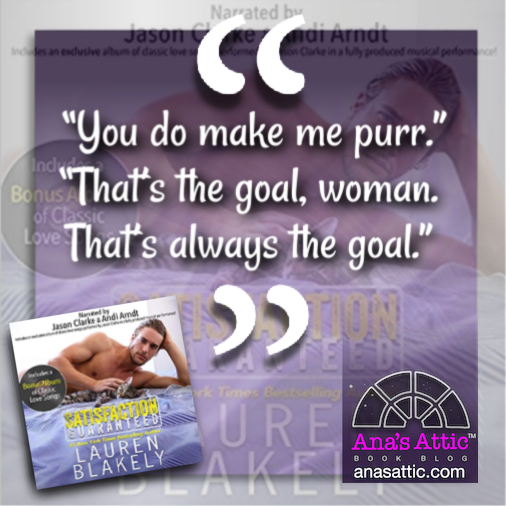 In my opinion, as good as Lauren’s books are in print, they are even better in audio. Not only does she write with the audio in mind, but lately we get extra bonuses as audio readers. In Satisfaction Guaranteed we not only have Jason Clarke’s sexy voice singing little parts throughout the book, we all get an album of him singing old standards at the end. We also get a little of Andi Arndt voicing Sloane’s “notes to self”. PLUS we get a bonus novella!

With Lauren Blakey, you can bet this title holds true: Satisfaction Guaranteed. That’s the case with every LB book, I am always left satisfied, like I just ate a delicious piece of chocolate cake without the guilt. Lauren Blakely’s male POV books are my favorite, and the way she worked the music through the audiobook was genius. I think listening to the prequel novella at the end of The Dating Proposal helped me establish a connection with the couple that may not be as strong if you didn’t listen first, though it is by no means necessary. A little slower to get into than many of Lauren’s books, Satisfaction Guaranteed sure ended up worth it in the end. With a sexy singing vet and a heroine you want to hang out with, Lauren will leave you Satisfied. I Guarantee it.

*Lauren is donating 10% of the proceeds for SATISFACTION GUARANTEED for the first month to animal rescues! (In honor of the hero being a veterinarian and the heroine working in animal rescue). This donation applies both to ALL preorders and to all sales in the first month across all formats! 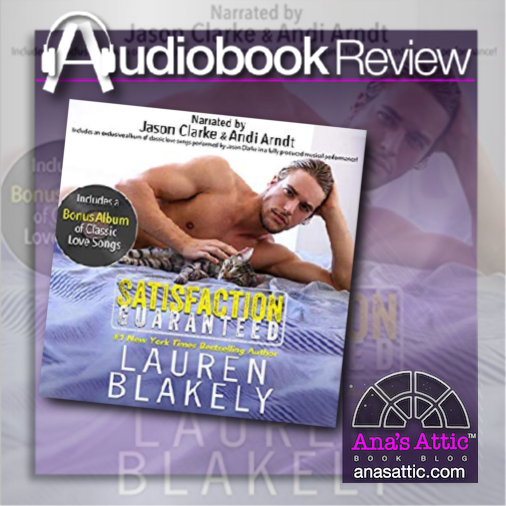