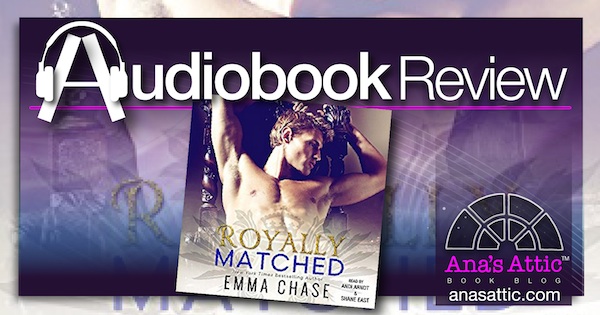 Emma Chase is an auto buy author for me. I have read all of her books and not once have I been disappointed. Her audiobooks are amazing too, and she has a knack for picking great narrators. In fact, it was an Emma Chase story that cemented my love for all things audio. No matter how you read it, Royally Matched was amazing. I loved Royally Screwed, but I knew Henry’s story would be different because he is so different from his older brother. It is not necessary to read Royally Screwed first, but I do think it helps understand the characters better. There is no way to even read the blurb without this spoiling the first book though, so please understand that there WILL be spoilers for Royally Screwed, but not Royally Matched (beyond what you learn in the blurb).

“I’ve never been very good at doing what I’m told.
It’s a problem.
Or a reflex. If they say left, I go right. If they say sit, I jump. If they say behave, I get drunk and spend the weekend screwing all three of the Archbishop’s tripled nieces.
They were nice girls. I wonder what they’re doing this Friday?”

Prince Henry has always been the carefree, irresponsible partier. His brother was the responsible one, because he was to become king. But when his brother Nicholas abdicated the throne for love, the responsibility went to Henry who suddenly has to man up. Running a country is a hell of a responsibility, and since he grew up thinking he’d never have to do anything for the country, he never paid attention to politics. But suddenly he is thrust right into it, with the huge amount of paperwork he needs to read through lining his walls and stacked everywhere he looks.

“They’re all counting on me. Depending on me. To lead them into the future. To be good.  To be… King.  Christ, my stomach rolls every time I think the word. When someone says it aloud I gag. If I’m supposed to be the Great Royal Hope for my country, we’re all well and truly fucked.”

When Queen Lenora sends Henry away to a castle in the middle of nowhere to study up on everything, he gets bored and decides to take a producer up on her offer to have him star in a Royal Bachelor dating game. 20 beautiful blue blooded, supposedly virgin women are all at the castle to win the diamond tiara and marry the Prince.

Sarah Von Titebottum (why the stupid name? It doesn’t fit) is a painfully shy bookworm who absolutely loves her job as a librarian. She and her sister Penny (who has star aspirations) are both invited to be on the show, but Sara would never put herself out there like that. Her sister Penny is the complete opposite, and this is her lifelong dream come true. Their mom will only let Penny go if Sarah also goes to keep her out of trouble, so Sarah goes. She isn’t one of the 20 on the show though, she is just a chaperone for Penny.

Henry has seen Sarah before (in the first book), and the shy girl seemed to call out to him. So when he sees her there at his castle, he can’t help but want to be friends with her. Of course, he’s Henry, so he wants a little more than friendship, but he knows how shy she is.

“Corrupting the good ones is my favorite pastime.”
“I’m not corruptible.”
His smile broadens.
“Good. I like a challenge.”

Sarah is scared of her own shadow and has some issues but she can’t help but get sucked into being Henry’s friend who he flirts with.

“You can’t come with me.”
“That sounds like a challenge.” I smirk slowly. “I bet I could time it just right.”

But she knows she can’t fall. After all, he needs to pick one of the 20, and she is too shy for Royal life.

“He could crush me; the foreshadowing is clearly written. It’s a tale as old as time: the inexperienced bluestocking and the bed-hopping rogue.
Bloody hell, I’m a trope.”

I love her book references all throughout the story.

“There are meetings in books that stand out, that alter the course of the story. Profound encounters between characters when one soul seems to say to the other, “There you are—I’ve been looking for you.”

“Stories inspire us to reach high, love deep, change the world and be more than we ever thought we could. Every book allows us to dream a new dream.”

Something about the pair together just worked. It made Henry want to be a better person, and Sarah started to gain confidence and courage. 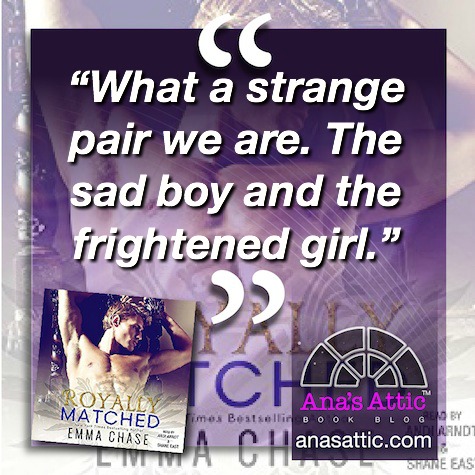 I loved his accent, but had a lot of trouble with hers. Anyone who listens to romance novels a lot knows how Andi Arndt speaks. They are supposed to be from a country called Wessco. He has an accent, she should have the same. Andi Arndt tried to have one but it wasn’t great and kind of faded in and out. I like her, but I think a less known narrator with an accent would have been better for this.

One again, Emma Chase brings a fresh, different, funny and sexy story. I love the fantasy of reading about a royal family, and I am having a great time with this series. Prince Henry is charming and witty, and I loved the things that came out of his mouth. I think this series is unique and memorable, the characters are all likable, and it’s sweet, sexy and fun with some real emotion. I can’t think of anything else I look for in a book. Emma Chase will continue to stay at the top of my auto buy list! 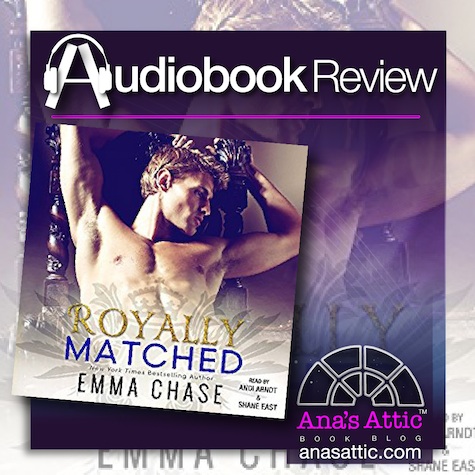