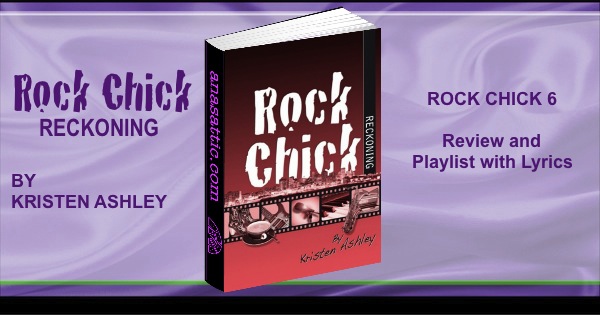 Rock Chick Reckoning by Kristen Ashley is the 6th in the Rock Chick Series (See the reading order and reviews here). I was so looking forward to this one because Stella’s band is practically perfect to me. I am a classic rock girl, and to me, I had the perfect Stella in my mind so much! I honestly never totally picture a character in my mind. But from the first time she showed up in the books, Stella was real. (See the video at the end of this review).

I read the Rock Chick books differently than most. I spread them out. I do this because

But I think in this case, it actually took away from the book for me. I had a little more trouble remembering who went with who, and remembering every side character who ever appeared in a Rock Chick book. Because I think they are all here plus a bunch of new ones from Stella’s band. That is a lot of characters to keep straight!

{edited to take out some spoilers}”Okay, let me get this straight.” Annette stood in the doorway staring at us. “First you all meet Roxie…now that’s after Indy got kidnapped a couple of times….. And after Jet got shot at, kidnapped a couple of times…. Then came Roxie and I was around when Roxie was assaulted… of course, she got kidnapped. I leave and new girl Jules starts a vigilante war against drug dealers….. Then new girl Ava survives… kidnapped repeatedly …. Now all of you are getting shot at at the same time?”

“That about sums it up.” Ally told her.

“Denver is cah-ray-zee.” Annette announced. “I love this fuckin’ place!”

Rock Chick Reckoning read like a series finale to me. The danger was more epic, every character was involved, they were ‘famous’ and there was even an epilogue which kind of gives away the next two books. Don’t get me wrong. I still loved this book, and I’m thrilled there are still two more in the series. But there was a lot to keep track of and remember here.

Stella is the lead singer of the Blue Moon Gypsies (love the name) and the “Queen of super shitty luck”. The band is mostly Stella and a band of misfits and Floyd, an older piano player. But Stella is the draw. She is incredibly talented, but her band is basically a bunch of losers who can’t seem to do a damn thing without her. But she loves them, and they love her.

Stella gets a call in the middle of the night from one of her bandmates who can’t wake up his addict girlfriend. When she shows up at his place, police cars are there, and none other than Kai Mason (Mace), the guy left her a year ago, and broke her heart with no explanation. But as she goes in to see her friend, she is shot at! Not only Stella, but all of the Rock Chicks were being targeted at the same time.

As with all the hot bunch guys, Mace goes into protective mode. He wants to take care of the wound on Stella’s hip and has Luke cuff her to do it. (mmmmmmmm….Luke can cuff me any time).

“This is humiliating,” I whispered, blinking back the tears.
His hands came to either side of my neck and I sucked in breath at the feel of their warm strength.
God, I missed it when he touched me.
“Kitten,” he murmured, and my eyes flew to his.
“Don’t call me that.” I whispered.

When she tries to explain to all the Rock Chicks who are hiding out for protection in Daisy and Marcus’s house that it’s been over for a while between her and Mace, they know it’s not true.

“If it was over, then when the Hot Bunch’s women got targeted by a criminal overlord, you wouldn’t have been called out, exposed, and shot at,” Ally pointed out logically.”

In typical hot bunch style, Mace insisted on them moving in together so he could protect her.

“Do you think we’re getting back together?”
“Getting? No,” Mace answered then continued,
“Back together? Yes”

Stella tried to fight him until she ended up underneath him.

“Christ, I forgot how fucking good you feel when you’re beneath me.”

Rock Chick Reckoning was a bit different from all of the previous books in the series. It was darker. Mace’s history, we learn, is really sucky, and Stella’s isn’t much better. We have bad-guy Sid looking to take out every one of the Rock Chicks and all of their friends, and we get parts of the book told from all the other character’s points of views.

But there is still plenty of humor, as there is with all of the Rock Chick books.

Shirleen: “Any one of those boys wanted to push me around, I’d say bring it on. Hell, I’d pay for one of ‘em to move into my house. They don’t even have to do me; just walk around so I can watch. Maybe in a towel.”

Ally: “Ally placed her hands over her ears and changed, “La-la-la, not-listening-to-the-story-of-my-brother-proposing-while-doing-the-nasty-one-more-time, la-la-la.”

Tex was awesome, as always…just wait and see.

Rock Chicks is really the perfect name for this book in particular. Because it’s about a real Rock Chick. And the music was SUCH a huge part of this book! 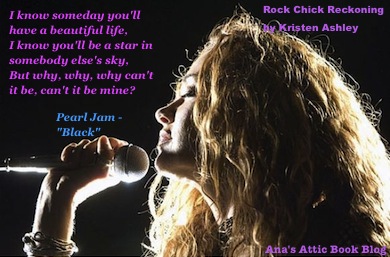 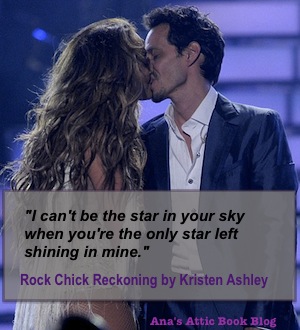 My favorite thing about Rock Chick Reckoning as with all of the Rock Chick books (and Kristen Ashley books in general) is the alpha, gets-what-he-wants, dirty talking man.

“You still love me?” he asked.
My eyes narrowed. “What kind of question is that?” I snapped.
“Answer it.”
“I will not, it’s –”
“Answer it!” he barked and I went still at the ferocity in his voice.
Then I whispered, “Of course I do.”
“Then we’re done talkin’. I’m gonna fuck you until I’ve erased everything I’ve said. Until the only thing you can think of is my cock inside you and my hands and mouth on you. Until I hear that fuckin’ voice of yours telling me you love me. I’m gonna fuck you until I know it’s me you want, despite all this shit, and I don’t care if it takes a fuckin’ week.”

Kristen Ashley gets her own scale. This was an amazing read, but I didn’t find myself squeeing about it on facebook, twitter and goodreads when sually I just can’t help myself. So in comparison to the other Rock Chicks, this one didn’t quite measure up.

If you are a regular reader here, you know that Kristen Ashley is a Goddess to me. I honestly loved every second of this story, I just found that that was so much going on, so much action, so many characters, and so many other points of view (which I loved at the same time) that it took away from the Mace/Stella relationship. But still, I love visiting Denver, and I can’t wait to go back.

‘You’re infuriating and bossy but you’re hot. You weren’t, I wouldn’t put up with you.’

It’s important to look up the songs with lyrics while reading this (The lyrics are very important, but due to copyright concerns, Kristen can’t print them in her books.) It is almost essential to look them up. You may think you know the song…but read the lyrics, feel the meaning. Here are the most important songs:

And So It Goes by Billy Joel: Lyric video – Lyrics only

All the Small Things by Blink 182: Lyric video – Lyrics only

I’m So Lonesome I could Cry (cowboy junkies version): video – Lyrics only