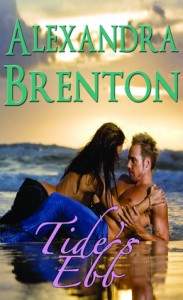 Tides Ebb by Alexandra Brenton was sent to me by the author as “like Seduction and Snacks (but even snarkier)” well, since S & S is one of my favorite books, I had to accept her offer to review it, right? Uumm, no. While I giggled once or twice, that was the ONLY similarity.

I loved Seduction and Snacks (see my review here) because I loved the characters and I wanted to be their BFFs. I absolutely HATED the characters in Tides Ebb. Fiercely. But I think that is intentional. Marianna is a lawyer who went to Harvard. She is pretty with “pert” boobs, that she likes to tell the reader about. Her boyfriend is a rugby player, and she spies him on the street with a tiffany bag, thinking he will pop the question. When she gets home, however, he has a Tiffany chain asphyxiating him while he is jerking off to a video that used to be him fucking her, but was changed to him fucking a goat. Sounds funny, right? It wasn’t really.

I kept hoping it would get better…..Marianna was then sent on assignment to Rhode Island, and after putting down all the normal people who lived there, she fell in the icy water near a marina and was rescued by a ship’s captain, who removed his clothes to rescue her:

“……Marianna saw that his penis was not erect. She had never seen this before, and she was insulted. Doesn’t this man know how attractive I am? There was also something wrong with his stomach. Where his six-pack ought to have been, this man had some sort of puffy mass of soft skin.
Marianna had never been exposed to something so repellant in her life. Don’t they have gyms in Newport? But then she remembered reading an article in Cosmo about people who couldn’t afford personal trainers.”

So, at this point I got used to hating her, and began to almost enjoy my hatred, because she was so over the top, the whole story was. I kept waiting for some redemption, and there was a little, but not much. I will say I laughed out loud at this great line:

Come on Marianna! Women are like Priuses–although we can go for miles and miles without it, sometimes we still need to get filled up!

There were a couple of cute lines, but the writing style was very……..strange. I overuse exclamation points like crazy, but this book was nuts with them. And every time Marianna and her friend would bring up something funny that happened, the book would say:

“Oh, how they laughed at that funny memory!”, or “Oh, how the girls laughed and laughed!”

Rating: 1 stars, 1.5 for heat (there is sex, but sex between characters you hate isn’t too hot)

Once I got used to the fact that the characters are meant to be hated, the second half of the book was more enjoyable, with a few funny lines. I’d love if a few of you grabbed this one for $.99 and let me know if you agree with my assessment.
I have to tell you, I feel AWFUL about this rating. All authors work very hard at their books and this might be the first rating she gets, as it just came out today. But you guys asked for honesty. So here it is.
.
Purchase Tides Ebb at Amazon (120 pages)