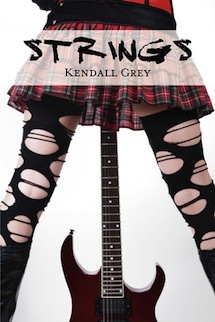 I love raunchy 12 year old boy humor. I do! That’s why I love Tara Sivec’s Chocolate Lover’s Series so much. I also love dirty rock star sex, which is why I love Olivia Cunning’s Sinners On Tour Series. So when I saw that so many of my friends who loved those books were loving Strings by Kendall Grey, I had to see what all the fuss is about. The blurb was awesome:

STRINGS is not suitable for slut shamers, uptight stone throwers, Holier-Than-Thou prudes, humorless virgins, persons with chronic neck or back pain, pearl-clutching bitties, those who disparage crude humor or vulgarity in their many forms, closed-minded people with sticks up their asses, or anyone under the age of 18. The vile, base language and shocking, unholy sexual acts contained herein are not condoned by anyone with a lick of sense and should certainly not be reproduced without proper training and protection. The potty-mouthed and perpetually horny “heroine” (the term is used loosely) of this book does not resemble a normal, well-adjusted, or remotely believable person in any way, shape, or form. The author acknowledges that the characters in this book are shallow and two-dimensional; the plot is both ridiculous and insipid. She makes no apologies for any of it.

And really, I can almost leave the review there (but you guys know I’m a long-winded motherfucker, so that shit isn’t gonna happen).

HEED THE WARNING PEOPLE!!! This was one dirty, raunchy book, and not always in a good way.

I have a really dirty mouth. FUCK is my favorite word in the world (It is so useful! It can be any part of speech, even used in the middle of words!). Some might say I’m perpetually horny (especially when I’m reading a hot book), and I like kink. It takes a lot to get me offended. But I gotta say…against what most of my friends think, I just didn’t love Strings. I didn’t hate it either. It was an OK in-between book because it was different and unique. It was funny at times, but not as funny as I thought the warning made it seem. But it was just weird and gross at times too. Who calls their own vag meat curtains?

“He wastes no time parting my meat curtains with his pork sword.”

At first, the lines are kind of funny…and then, not so much…so I was like:

I wanted to read only rock star books while I was a groupie on tour this summer. But I never met anyone who talks like Letty. But then again, the author does warn you that nobody is actually like that. When I gave into the fact that it was more of a parody, I let myself relax and enjoy it more. At no point did I want to put it down…but I think I read more just to see how far the author would go.

“by God, if I don’t get laid tonight, my cooter will go nuclear and wipe out a city block.”…“All I want for my birthday is to get fucked unconscious with no strings attached”

Well she meets Shades, and there is an immediate connection. They hop in a cab to go to a sex store to pick up a strap-on for Letty to use on him…

So first, Letty gives this stranger a strap-on in the ass for her birthday, then he returns the favor for hers.

“Taking his pink soldier all the way down into my pudding trench.”

Come to find out Shades is the new bass player in the band that her band is joining on tour. So Shades and Letty have lots more opportunities for dirty, kinky ass sex.

I liked the music part of the story, when there really was a story. The band part was actually a little more realistic than other books I’ve read, though the characters weren’t. There were some super sweet moments…and a few funny ones, but then I was just like:

“I watch the ball of his silver stud going to work, beating on my little bald girl in her boat.”

“I’m about to blow, and I want your man chowder inside me when I do.”

“I climb aboard the sixty-nine train, lowering my muff to his hungry lips while I get down and dirty with his man sausage.

“When he finished tongue-drilling me, he looked like he’d eaten a gourmet glazed donut.”

Rating: 3 Stars, 5 Heat (but it was a little too silly and gross to turn me on most of the time)

Most people I know either absolutely loved, or totally hated this book. There wasn’t much in between amongst my friends. Me? I’m on the fence. It was a quick, unique read, stuipidly raunchy and really dirty. But there was some fun, and some really sweet moments. I’m not sure I’d jump to read the next in the series when it comes out, but I may if it goes on sale and I need something light, dirty and a little stupid.

“Goddamn it, Shades, you make me want to squirt your fucking face.”

Tell me your thoughts if you’ve read it…I’m still really torn between laughing, rolling my eyes and gagging.