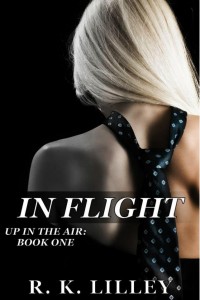 Move over Christian, Gideon, Ethan and Braden…..there is another hot, sexy, young, dominant billionaire in town!

In Flight is the first in the Up In The Air series by RK Lilley. I thought I had had enough of the dominant young billionaire books. Apparently not. Because this book grabbed me from the start and didn’t let go. In fact, I’m already in the middle of book 2, Mile High, as I write this review. I very rarely move on to another book before I review the first, but I couldn’t stop myself. I even snuck away from Thanksgiving company to read. Yup, really. (So, I’m a rude fuck, what can I say?)

Bianca and her best friend (in the closet gay) Stephan are flight attendants in first class. They have been inseparable since they were teens and really look out for each other. Both have had a traumatic childhood and are there for each other in every way possible. I have to say, I absolutely love their relationship. But Bianca has never let anyone else get close to her. In fact, at age 23, she is still a card-carrying member of the V-club. Though I usually roll my eyes at a gorgeous 23 year old virgin, in this case I can see why, her background made her uncomfortable with with anyone even touching her besides Stephan.

Until sexy, gorgeous “Mr. Beautiful”, James Cavendish comes aboard. Just the way he intently studies Bianca has her feeling something different. They shared an instant, electrifying attraction. Bianca is normally cool as a cucumber and never gets flustered, but James has her ensnared from his first gaze, and has her in danger of losing all of her hard-won composure.

“I knew James could take me to some dark place, but I would find pleasure there, and I wanted that.”

He immediately pursues her, and his possessive, jealous, stalker side is clear immediately.

“He leaned down to my ear. “I’m going to ruin you,” he breathed. “I’ll be your first, and I’ll fuck you so thoroughly that I’ll be your last too. You won’t want any other man after I’ve gotten my hands on you.”

But he also shows he is totally sweet and caring. Especially when he cares for her when she gets drunk in the beginning. He actually got makeup wipes from the bathroom and removed her makeup for her ….sigh….

“Well I came here because I very much want to fuck you until neither of us can walk. I want you so bad I can’t see straight. But since that won’t be happening now, I’m going to make sure you make it back to your room in one piece.”

James makes it clear from the start that he “doesn’t date”, and Bianca thinks it’s all about the sex. She is good at being aloof, and it makes James crazy.

“You’re tying me in knots, yet you remain unaffected yourself. Are you just waiting for a reason to end this? That’s the impression I’m getting at the moment. And that drives me fucking crazy, since I don’t have a clue what will tip the scales against me.” ~James

“It was hard to remember we weren’t supposed to feel anything for each other when he looked at me like I was more important than his next breath.”~Bianca

I know it’s all consensual, but the fact is, I like to hurt women during sex.   There’s a reason you fear me.   My strongest impulse is to control and to dominate, but make no mistake, I’m a sadist.   It doesn’t exactly make me a good guy.” ~James

What I really liked about this book was the dynamic between James and Bianca. Once you learn about their pasts, you can see how well suited they are for each other:

“Even mosochists need lovers. What would a girl like me do without someone like you? Perhaps everyone is good for someone.”

Then of course we have angst, and danger, and it all ends with a cliffhanger! Luckily, book 2, Mile High is out, but book three doesn’t come out until next year!!!! Grrrrr……
.
Likes:
Dislikes:
Rating: 4.5 stars 5 for Heat

Despite the fact that this series is so similar to Fifty Shades and Bared to You, it also had it’s own unique voice. It grabbed me from the start and I loved every second of it. There is absolutely no way you can read this and not grab up the sequel immediately. I will be adding this to a bunch of my Top Picks lists, and it will be right on top of my “What To Read After Fifty Shades of Grey” list.
.

“Oh, yes. You make me absolutely desperate, Bianca. I had never stalked a woman before I met you. I’m carrying a sliced pair of your panties in my pocket right now.”

Purchase In Flight at Amazon 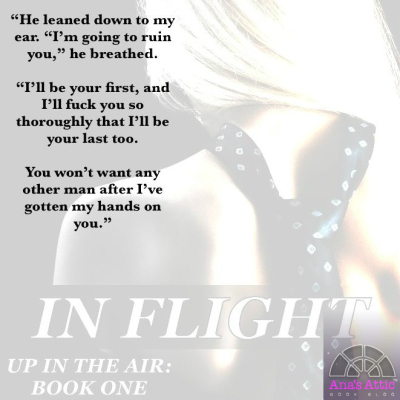