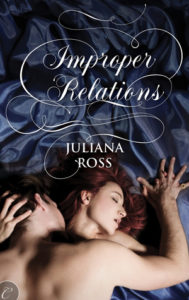 I must say, I grabbed Improper Relations by Juliana Ross because the cover was awesome. I didn’t even read the description more than briefly. When I realized it was a historical, I wasn’t really into it, until I saw many of my trusted reading buddies had enjoyed it, so decided to read on.

First things first, this is an erotic novella, about 58 pages. So there is more sex than story. (ya hear me complaining?) Hannah, is a  poor, plain widow earning room and board as her late husband’s cousin’s handmaiden. One afternoon she is in the library and spies Leo (a non-blood cousin by marriage) and another maid getting down and dirty. She is shocked to see the young maid enjoying every second of the act, and Hannah could not stop herself from watching. When the maid left, Leo calls Hannah out of her hiding spot and discovers that she thought sex was only to be endured as part of her wifely duties.

“I was nearly thirty years old, had once been married, and I’d never known, never suspected, that a woman could do such a thing to a man. It was the most fascinating, appalling, thrilling act I had ever witnessed.”

Leo proposes a teaching relationship, and Hannah finds she can’t resist. So begins a journey of a woman finding her sexuality. As their relationship continues, it is clear that the older, poor Hannah can not be a suitable match for the wealthy playboy that Leo is. But Leo may have other ideas.

I liked that Hannah was a virgin in all ways except physical. She had never even touched herself, or known that women can receive pleasure. Since this is the 1800s, I can understand that. All she learned from sex, she learned from her mother, and her husband never taught her any different.

The scenes were hot, and I enjoyed the teacher/student relationship Leo and Hannah began with. The author did a good job of setting the scene and using period language. At one point I had to look up the word “cock” to see if it was used that far back. It was used back in the 1610’s by the way, that was fun research in which I also found that a “pizzle” is  the penis of a bull used for a flogging instrument, but I digress.

This short, hot novel was a nice departure from many of the books I have read of late where the modern day woman is a virgin at 22…..this woman was not, yet she was in many  of the ways it mattered. This innocence would not be possible in a modern-day romance.

All-in-all, I enjoyed the book, it was a great bedtime story and a nice, unique filler between bigger reads. I am still more of a modern girl, but if you enjoy historical romance, this hot little novella may be for you.

*ARC Courtesy of NetGalley in exchange for an honest review