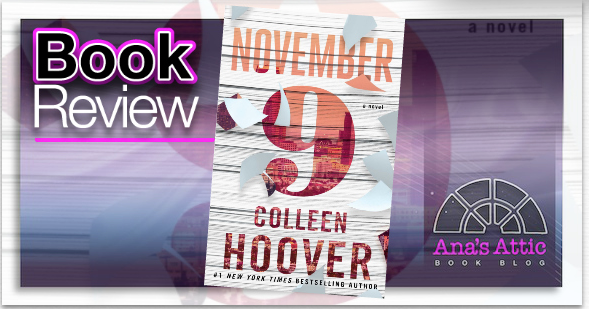 November 9: A Novel by Colleen Hoover

Colleen Hoover. I swear that lady is a genius. I have been a fan since Slammed was released, and think she is an absolutely brilliant writer. I am not usually a big fan of New Adult. With an 18 year old son, some of it just hits too close. Plus the horribly tragic pasts NA characters seem to have are just a little much for me. But Colleen Hoover is different. I will read anything she writes, and I will go in blind. And damn, November 9 is another book filled with laughter, emotion, tears, an epic twist, tragedy, and love.

For the sake of no spoilers, I will not go any further than the blurb here except for a few quotes that will not spoil the brilliant story (as usual in my reviews, but I will be even more careful here). November 9 sucked me in on page one and I was a completely useless mess until I devoured every last drop of the story, and I can’t imagine reading it any other way, so clear your schedule!

Fallon has had a rough time and now has some major self-esteem issues. But she has decided to start over again by moving from California to New York to pursue her acting career. November 9 begins the day before her move. While Fallon is having a really rough time, a handsome stranger swoops in to save the day. Ben was funny as hell, charming, and damn, I fell in love with him, so how could she not?

When I woke up this morning, I thought today was going to be one of the toughest days I’ve had in two years. Who knew the anniversary of the worst day of my life might possibly end on a good note.”

But Fallon’s mom taught her one thing: not to fall in love too soon. To wait until she is older.

You’ll never be able to find yourself if you’re lost in someone else.”

Ben is a writer looking to write his first novel. Fallon is a romance reader, and I love how they described things in “bookish” terms.

I had to create angst so I could try to make this kiss a ten.”

After spending an amazing day and evening together, Fallon says they need to cut all ties when they part. They even block each other on social media, so they wouldn’t be tempted lose herself in a long distance relationship with Ben.

How the hell am I supposed to just say goodbye to her tonight, knowing I’ll never talk to her again?”

So they come up with an idea:

Meeting up once a year on the same date sounds like a really good basis for a romance novel. If you fictionalized our story, I’d add it to the top of my TBR.”

Being apart and living separate lives but thinking of each other non stop makes subsequent annual meetings even harder. 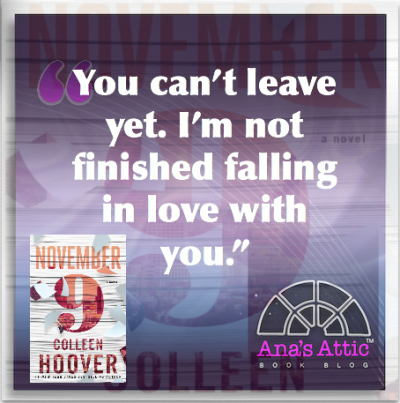 I thought I was stronger than a word, but I just discovered that having to say goodbye to you is by far the hardest thing I’ve ever had to do.”

This story would have been brilliant just as it was. I loved the characters. I loved the ‘same time next year’ theme. But Colleen had to go ahead and throw in a twist. A twist that had me yelling at her for ruining this brilliant read, while praising her for throwing a twist in that I didn’t see coming. But I wasn’t stopping until the end, because I knew if anyone could make me swoon again, it would be Colleen Hoover.

Colleen Hoover’s brilliant writing filled with humor, angst, longing and romance is back in full force in November 9. She took a familiar story line (Same Time Next Year & Sleepless in Seattle) and gave it a totally unique twist. I absolutely LOVED Ben. I wasn’t thrilled with Fallon’s decision, but I loved her and loved watching her grow. The bookish tie-ins were brilliant as well. The book was phenomenal on it’s own that it just didn’t need the twist which actually took away a little bit of my love.

This isn’t one of your fairy tales, Fallon.This is real life, and in the real world you have to bust your ass for the happy ever after!”…“When you find love, you take it. You grab it with both hands and you do everything in your power not to let it go.” 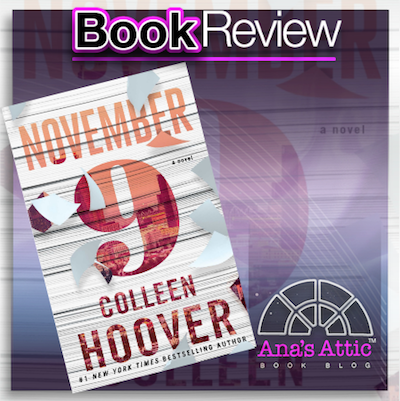