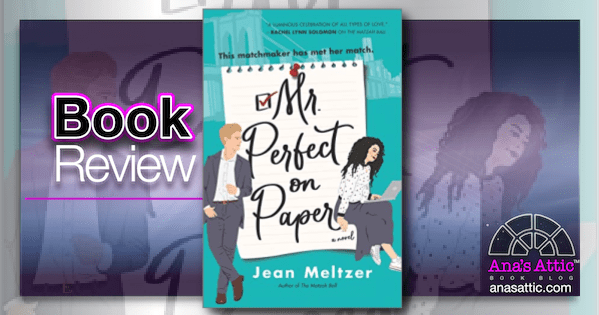 I really enjoyed reading about a flawed, real Jewish character with chronic pain in The Matzah Ball by Jean Meltzer, so I immediately grabbed Mr. Perfect on Paper when I saw it. I am”Jew ‘ish’” in that I don’t really practice the religion, but I do celebrate the holidays with family and identify as Jewish. So I enjoy seeing the representation in books, and her books teach me new things about my religion.

“Judaism places a high value on the sexual satisfaction of the woman in the marriage. In fact, she’s always supposed to…you know…first.”

Dara Rabinowitz is the 34-year-old CEO of J-Mate, the popular Jewish dating app, and she comes from a line of Jewish matchmakers. She also has Generalized Anxiety Disorder and is very open about it. When Dara and her Bubbe (Grandmother) were invited to a daytime talk show, Dara’s carefully planned appearance went off the rails when her grandmother told the entire TV audience Dara’s list of qualities for the perfect man.

The number one requirement: He must be Jewish. Dara is very religious, keeps a kosher home, and her faith means a lot to her. He should also be a doctor or lawyer and have no baggage. The audience of “Good News New York” loved her embarrassing segment so much that the show decided to set her up on dates and air them as live segments. Since it was also boosting J-Mate subscriptions, Dara went along with the plan.

Chris Steadfast is the host of Good News New York, and the show has always soothed Dara. In fact she has always harbored a little crush on him. But when they meet in real life, sparks fly. The widowed single dad and Dara develop feelings for each other, but he isn’t Jewish and doesn’t check off anything on her list, so they fight the attraction while he has to film her going on crazy dates with other men.

Mr. Perfect on Paper by Jean Meltzer was fun and unique. I think any Jew and anyone with Generalized Anxiety Disorder will especially enjoy this romantic comedy, though I think it will appeal to any romcom lover. Jean Meltzer mixed funny and serious for a delightful, sweet romance. 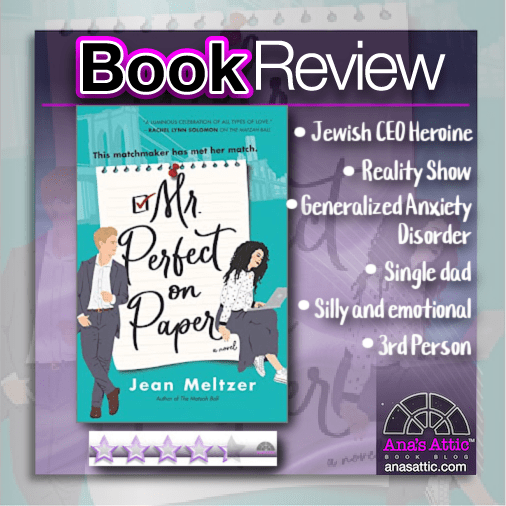