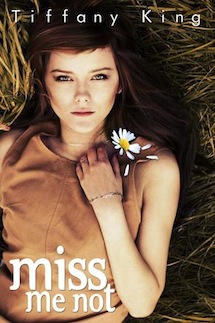 Tiffany King is coming to Wicked Book weekend tomorrow, and I wanted to read one of her books before I went. I asked her to choose, and she sent me Miss Me Not. Now, I love all of my kinky hot books, but some of my favorite books ever are YA or NA. This is a YA book with some mature themes that were handled really well.

When I first started reading, I thought “Oy, another angsty teenager who is a social pariah book”. Yet it sucked me in from the first page, and never let go. It had me smiling, sad, angry, giggling, sobbing and saying “aaawwww” throughout the book. It made me grab my kids and make sure they know I love them so fucking much I would die without them.

Madison is a shadow. She wears baggy black clothes and hides out during lunch with James, her “suicide buddy”. She and James made a suicide pact. They would do it together. Until Mitch Johnson beat them to it. When Madison saw the fake drama the “populars” made out of the suicide, she realized that was the last thing she wanted.

“For four years I had done nothing but contemplate snuffing out my existence. No more judgments, no more glares and most of all, no more gossip surrounding things I had done. All of that was swiped away. In the end, they would still win. They always won.”

Madison was alone. Her father left four years before and never looked back. Her mother (the horrible bitch) spent all of her time at church, and Madison passed her at breakfast only. She even had to call her “Donna” instead of Mom. She lived on frozen dinners and pizza, and had no friends except the pseudo/suicide friendship of James.

“I mean, what kind of effed up person envied physical abuse as a form of desirable attention? Me. That’s who.”

Madison had been a really bad kid and tween. She acted out and did anything to get attention. Negative or positive, it didn’t matter, just SOMETHING. But something happened 4 years before that turned it all around. She says she did something absolutely horrible. Now she tries her hardest to fade away and disappear.

Until one day she is forced to get a tutor after school and it turns out to be the very handsome and very popular Dean. Who immediately takes her under his wing, and clearly has feelings for her.

“As an obvious rule, I didn’t crush on anyone, but if I did, Dean Jackson would be worthy. Dean was everything I wasn’t, smart, funny, charismatic and all-around good guy.”

Dean wouldn’t take no for an answer. He kept after her, and slowly and steadily ripped her of all of her protections. Madison hadn’t let anyone touch her in 4 years, Dean gradually eased her out of that. He brought her into his big, loud, hugging family, and they wouldn’t let her go either.

“Was it too much to ask for a germaphobe in the group?”

Dean’s family was a perfect sitcom. Madison didn’t even think it was real, but she started to see there was more to life than her hellish, lonely existence. And I must say, Dean’s mom was AMAZING. Most moms would freak if their good-boy son brought home a tattooed girl with a bad rep, but she was wonderful. I fucking love that lady.

“Madison, Dean has filled me in on your home life, and I hope you don’t mind when I say that sometimes parents are just assholes,” she said, shocking me.”

As much as Madison tried to push them away, they kept at her, breaking down all of her defenses.

“You might as well know, Mads, you’re not going to scare me away. So stop trying.”

Would I really be missed? Would Dean miss me? I looked down at the flower that was still clutched in my hand and began plucking off petals. “Miss me, miss me not.”

Despite this being a YA book (there wasn’t really even sexual tension, but there was talk of sex, drugs and rape) this really was a GREAT read. I couldn’t put it down. Miss Me Not had the perfect combination of angst, drama, love, funny moments, sad moments and left you feeling good, not wrecked.  It had a happy end, and really made you think and realize why some kids are the way they are. I look forward to reading more of Tiffany’s books!

“My world was suddenly filled with people who were the petals of the daisy that would miss me.”

Purchase Miss Me Not by Tiffany King