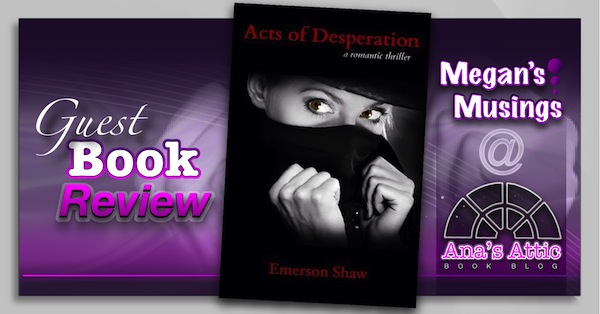 Acts of Desperation by Emerson Shaw

I have been in a bit of a book funk lately…And not because I haven’t found phenomenal books to read, but more so because I was reading the “same kind” of books over and over.  While I loved them, I was looking for a little more to spice up my romance reads…maybe a bit of thrill and/or mystery?  I ran across Acts of Desperation by Emerson Shaw, which was listed as a romantic thriller (thanks for the link Ana!)…the description said that the novel was based on actual events. I was sold.  Here’s my synopsis:

The main character, Sember, is a strong willed attorney. Seemingly, she has it all…growing career, long-term relationship, and a family that loves her.

Sember’s sister, Sarah, is married to an egotistical douchecanoe. He is a jerk to her and a jerk to their children. He’s also a cheater. Naturally, Sarah files for a divorce…but he doesn’t make it easy on her. Her case is struggling and Sember wants desperately to step in to help but is afraid that she’s too close to be helpful.

Meanwhile, Sember’s live in boyfriend, is acting strange and distant. In an effort to rekindle the romance, she gets off work early to plan something special only to come home to a surprise of her own. It’s time to say “adios” to her boyfriend John, but he’s not letting go easily.

Enter sex on a stick Jax Alexander. Holy shit, the immediate sexual tension between Jax and Sember is palpable.  All it takes to ignite the fire between them is a stolen kiss after a lunch date. From there, the steamy romance of these two powerful attorneys explodes.

In an effort to help out Sember, Jax agrees to take one Sarah’s divorce case. But Jax has secrets in his past, secrets that haunt him. Secrets he is not ready to share. These secrets have the power to harm him and those around him.

This book had mystery, suspense, sisterly bonds, romance, action, revenge, and fuck-hotness all wrapped up in a pretty little bow.  There are multiple story lines happening throughout, but Emerson does a great job of running them in tandem with one another without creating confusion.  From the very beginning, you are drawn in…and the fact that the content is based loosely on actual events sucks you in further.

On the edge of my seat, with furrowed brow, I tried to unravel the web of mystery and lies. Emerson keeps you guessing at what will happen next, and it was fantastic to watch it all come full circle. Amidst all the mystery and thrill, there was a healthy dose of steam. The chemistry between Jax and Sember was smoking hot.   Overall, I enjoyed this book. It gave me what I was looking for…a romance with a little extra umph. This was a great debut novel for Emerson. I look forward to reading more from her.