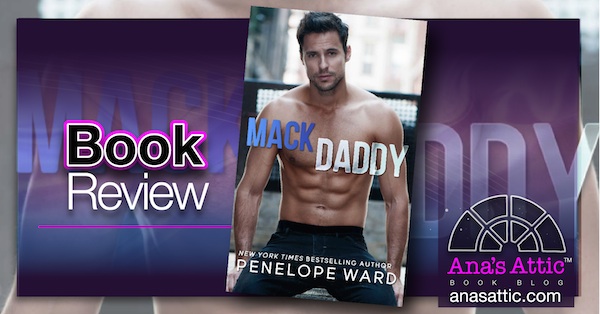 I didn’t even read the blurb for Mack Daddy by Penelope Ward before jumping in. I saw single dad and just grabbed it. From the title and cover, I assumed it was a romantic comedy. While there were some really funny moments, this was an emotional book that covered a lot of themes—single dad, second chance, friends to lovers and even a bit of a love triangle.

Francesca (Frankie) is a 1st grade teacher at a Catholic school, living with her much older, professor boyfriend for 2 years. She is comfortably happy with her life.

“You should get a look at the DILF at the registration desk,” Lorelai whispered as she entered my classroom. “Hottest dad I’ve ever seen in my five years here.”

Until Mackenzie (Mack) walks into her classroom with his young son. Mack was Frankie’s college roommate, best friend, and first love.

“He was the first guy who’d ever broken through my walls, made me comfortable in my own skin, then broke my heart.”

“Frankie-Four-Eyes” was awkward and shy in college with some major OCD and anxiety. Mack was gorgeous and popular. But between them, something clicked.

As their friendship grew, Frankie fell head over heels for Mack. The problem is, he had a girlfriend back home in DC that his politician father was basically making him stay with. He never cheated on her physically, but his heart was with Frankie. They just never went there. Every time he left to visit his girlfriend in DC, Frankie’s heart cracked a little further. When he was about to leave to go home for the summer, they finally admitted their feelings. So he went home to break things off with his girlfriend and come back to Frankie. Only he never returned. Now he is standing in her class with his 8 year old son who suffers from OCD and anxiety.

One thing I really loved in this, is that in the present tense, you never ever doubt Mack’s feelings for Frankie.

“We all have that one person. It’s not necessarily someone we end up with. But it’s that person who, for whatever reason, gets under your skin and stays there. You can move on, but parts of them are always with you. Sometimes, if things never had a chance to develop, if feelings are still unresolved, that person becomes an even more powerful force in your life, even in absentia.”

The problem? Frankie is living with a really good guy, and Mack broke her heart once before. Quite honestly, she never let him go in her heart, she just can’t let herself get hurt again, especially when she has a great guy at home. But the pull may be too strong.

“You asked what I plan to try? Everything. Every goddamn thing, Frankie—until you tell me to stop. Until you look me in the eyes and tell me there’s no point in continuing.”

There are a lot of twists and turns and side stories that to me weren’t really necessary and caused even more angst, but boy, it certainly made me scream at my kindle…NO!!!!!! 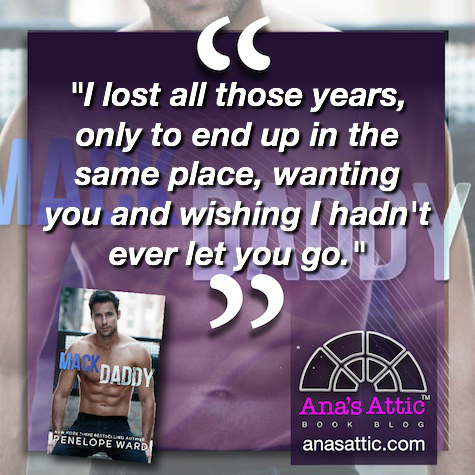 While I wouldn’t say there is out and out cheating in this book, there is definitely something very close to it on both of their parts. While I usually hate that, I felt like it wasn’t sneaky, so I was OK with what went down.

I enjoyed every second of Mack Daddy. It was well written, well paced for the most part (I would have liked more together time in the end), and had a great mixture of emotion, humor, sexiness and angst. OK, maybe a bit too much angst, as there were a few things put in that were almost random to the story just to give more angst. I loved the parts with his son, Jonah, and would have liked a little more of that. The combination of his and her POV as well as flashbacks to the past were done beautifully and I never had any issues with the transitions. While there is a bit of a love triangle, I think it was handled well, and I didn’t really have a problem with it as it wasn’t really sneaky on anyone’s part. If you’re looking for a fast paced, angsty, single-dad, sexy second chance romance, I totally recommend Mack Daddy and I look forward to reading more from Penelope Ward. 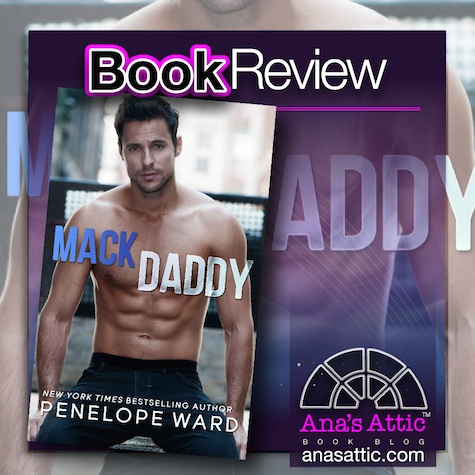