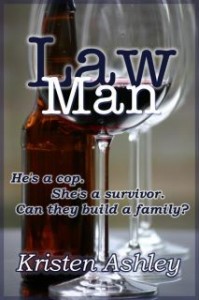 Law Man is the third in the Dream Man series (see order here) by Kristen Ashley. 4.5 for story, 3.5 for heat. Let me start off by saying I LOVE Kristen Ashley, and I love this series. That being said, this wasn’t in my favorites of her books, even though I LOVE Mitch. The book started pretty rough for me, but the second 3/4 was AWESOME. As always, it was a perfect KA epilogue as well. My issue? Mara. At first, I really didn’t like her.

Mara comes from trailer trash, but escaped her hometown and family right when she graduated HS and made a decent life for herself. She has a MAJOR self esteem issue that gets REALLY annoying after a bit. Even worse, she has a rating system for everybody she meets, (luckily she doesn’t share this with anyone but the reader) and goes on and on and on about it. She considers herself a 2.5 even though her friends tell her she is at least a 10.5. She is secretly in love with police officer Mitch Lawson (a 10.5 so totally out of her league) and though he lives in her apartment complex across the way, she avoids him like crazy because she is ridiculously shy and thinks she isn’t even good enough to speak to him. She goes on to rate all of the other neighbors, with reasons why they get points added or taken away, and her system of who can hang with who. Kind of obnoxious, even though she rates her own self low.

Mitch overhears that she has a plumbing issue and insists on helping. He tries to get a date with her that she avoids because she thinks it’s a pity date. Then when Mara gets a call that her trouble-making cousin’s kids ran away again, she goes to rescue them and Mitch sees and insists on coming along.

Mitch is AWESOME. He takes control and takes over helping Mara and her cousin’s kids. He had been crushing on her all along also, but needs to help her “get her head out of her ass” and stop the stupid ratings and low self esteem. Together they pick up Mara’s cousin Bill’s kids, Billy and Billie (yes, you read that right) Billy was 9, and Billie (a girl) was 6. These kids were adorable, and growing up with a dad so wasted he was doing smack right in front of them! Mara takes the kids away with Mitch. Good guy, swoon-worthy Mitch gets wind of their lives, and he makes it his mission to make sure no more harm comes to these great kids…..thus begins a family.

Mitch also helps Mara get over her issues with self-esteem, and when that happens, Mara is awesome. So are her friends! I love how Elvira and Tack and others from the series were brought into this. And I LOVED Mitch!!! Who wouldn’t? He is a sweet, loving, sexy, alpha who takes on two kids without batting an eye. Mara, Mitch, Billy and Billie have all sorts of obstacles including the Russian Mob, the “Trailer Trash Twins” and a few more.

Alpha Mitch: “You jump outta my truck again before I’ve come to a complete halt, swear to God, baby, I’ll turn you over my knee. You with me?”

Sexy Alpha Mitch: “Straight up Mara, I want you in my bed. And when you’re in my bed, I’m gonna be in you. And while I’m moving…………..” Well, maybe I shouldn’t give the rest of that hot speech away, it’s so much better if you read it yourself.

Sweet Protective Alpha Mitch: “I gotta protect those kids from any more falls and I gotta protect my woman from takin’ anymore too and I’ll exhaust myself, bleed myself dry and run myself ragged to see to doin’ that” (swooning here!)

There are so many good quotes to choose from! But I don’t want to ruin it. I really loved the book. I was annoyed by Mara at the beginning, and some of her sayings were annoying and repetitive (she says her stomach goes “Whoooosh” every time Mitch says or does something sweet, and her rating system) but this was quickly overshadowed by my love for all the other characters. Mitch & the kids were amazing, and once Mara got over herself, she was great too.

Still loved it. Just not as much as many of her other books where I LOVED the heroine. I chose to read this Kristen Ashley book because her books always make me happy and I needed a lift. It worked! (I also barely slept in the 2 nights I had it, like I do with all of her books too.) I can’t wait to read Tack’s book next in Motorcycle Man!

I just love those alpha males! See my review for