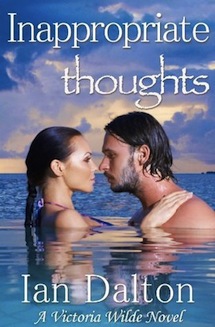 Author Luke Young sent me his book Friends With Partial Benefits a few months back. It had been on my TBR list before that, but I’ll admit it, the fact that it is written by a guy had me a little concerned, so it stayed on my tbr. Then I heard he has the same book with more sexy stuff….so I asked him to send me that. Because, well, I’m a horn-dog. I admit it. So he sent me Inappropriate Thoughts, written under the pen name of Ian Dalton. This is the same book as Friends with Partial Benefits, with 30 extra pages of smut. No complaints here! If you aren’t sure which series to read check out the comparison of the two series here. I also have the series order for both posted. See the Friends with….Benefits Series by Luke Young here. See the racier Victoria Wilde series order by Ian Dalton here, this book is in the latter series.

All I can say is “why did I wait so long?” I love funny romances, and I had a great time reading this one. It was a perfect break from the overly intense YAs, and the the overly hot billionaire alphas. At no time did I feel that the author being a male detracted from the book, and I have to say, I think this guy’s wife must be pretty lucky.

Brian Nash is a tennis junkie, and roommate and best friend of Jillian’s son, Rob. While Rob has a steady girlfriend, Brian has been unlucky in love. Crazy about  a girl who can lift her leg straight over her head, Brian thinks he’s in love with the girl, but all she does is lead him on. Rob insists that Brian come home to Miami with him for Spring Break instead of pining away for the girl at school in Georgia. But in Miami, Rob spends most of his time with his girlfriend, leaving Jillian to entertain Brian.

When she goes into Brian’s room one morning to wake him for breakfast, she can’t help but see and admire his “gorgeous penis” (a theme that continues throughout the book, in fact Brian is complimented numerous times by several people on how beautiful his penis is. I’m not sure what makes one that beautiful, but I admit it, I kinda want to see it.) The sexual tension between the two of them while playing tennis continues to grow, and we find Jillian secretly watching Brian do other things as well.

When they break out a joint (supplied by Victoria) that was when the fun really began. I found myself hysterically laughing to the point that I woke my husband from shaking the bed (and since the book also got me going, my husband didn’t complain about the wake-up call).

“I think I’m really f’ing high, but I feel like I’m thinking so incredible clear right now.” He nodded. “I know exactly what you mean. This must be some special, new, clear-thinking blend of marijuana – kinda like delta-8-THC.”

And they come up with the “FWPB”-Friends With Partial Benefits scheme. They know that it is inappropriate for a mom to fool around with her son’s friend, so they come up with a scheme….just remember, they are stoned.

“I’m not your tennis whore, you know. I need to be wined and dined and…other things…first.”

“Do you think if people heard us, with our constant pseudo-sexual-slash-tennis banter, they would want to kill us?” “Definitely. After five minutes, they would beat us to death with our own racquets,” she replied with a casual nod. “Personally, I love us,” he said a little sarcastically. “Oh so do I, we are a lot of fun.”

And they were! I think I want the souvenir t-shirt:

I am absolutely planning on reading this whole series, the book was a fun and quick read, perfect between angstier reads. Since this is called the Victoria Wilde series, I expect to see even more of the hysterical Victoria in future books, and I can’t wait. I thought she was a riot. At the end of this book she discusses becoming a sex therapist…she would probably be great at it. She offered one great piece of advice: